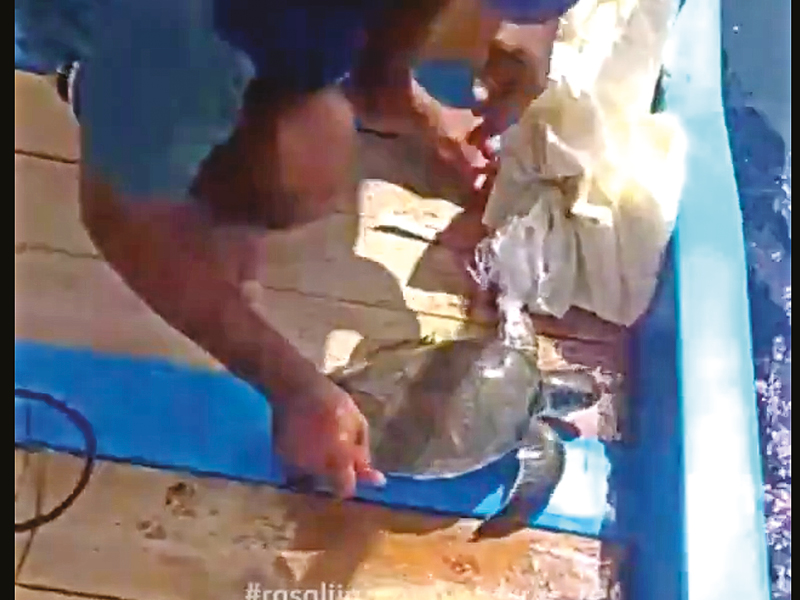 A video of a fisherman rescuing a green turtle that was stuck in a plastic bag has evoked strong  emotional public responses.

Mohammed said, “All thanks and appreciation to the fisherman Ahmed al Harbi from Ras al Hadd for saving a green turtle that was stuck in a plastic bag. I say to everyone who wants to enjoy Oman’s nature: Think and don’t throw garbage overboard.”

“God bless him and reward him for the noble humanitarian work he has done,” said Malik al Yahmadi on Twitter.

He added, “He sends a message to those who dump their waste on beaches and into seas, causing damage to environmental components.”

Another Twitterati, Rashid al Ghazali said, “Thank you my dear Ahmed al Harbi for saving this turtle, which is rare and in extinction. Some countries are interested in wildlife. The sultanate cares and preserves these living creatures. The Omani government has established a special reserve for them.”

The Ras al Hadd Turtle Reserve was established as per the provisions of Royal Decree No 25/96.

Another person appealed, “We kindly ask the tourists to keep the beaches clean.”

Another person tweeted, “We ask the concerned authorities to set up instructional panels to clarify the disposal of trash. Last weekend on Qurm beach, I saw a lot of rubbish like tobacco bags, coffee cups, plastic bottles, boxes and old shoes. We must protect the environment with its beauty.”

Dr Abdullah al Amir, another Twitter user, said, “May God bless this positive spirit and enthusiastic love for the aesthetics of the sea and its components. Wonderful work from a great personality.”

Another person tweeted, “We hope the employees and observers of marine and wild life at the Environment Authority that they increase their inspection campaigns to preserve this wealth, as well as plant trees in the mountain areas between the cities in all of Oman.”

The Environment Authority (EA) on Twitter said, ‘Thank you very much to Ahmed al Harbi for saving the turtle and putting it back in the sea. This is also a message to everyone not to throw waste, especially plastic, into the sea, as it poses a threat to marine life.’