An encounter with the gentle giants of the ocean 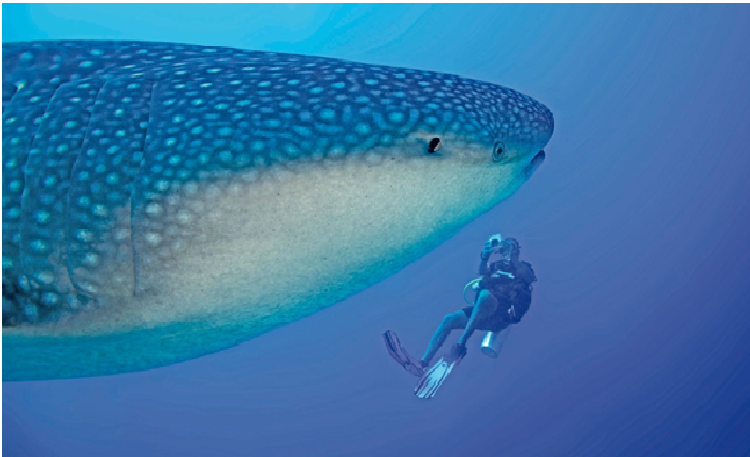 We all have certain things we would love to do in our lifetimes, a bucket list perhaps?

An ambition on my own list was to one day swim with a whale shark.  A few years ago I started Scuba diving and this goal was always in the back of my mind.  Until last weekend these amazing gentle giants of the sea had remained elusive to me.

The whale shark is found in open waters of the tropical oceans and rarely found in water below 21 °C (70 °F). A whale shark’s lifespan is between 80 to 130 years.  They have very large mouths and are filter feeders, which is a feeding mode that occurs in only two other sharks – the megamouth shark and the basking shark. They feed almost exclusively on plankton and small fishes, and pose no threat to humans.

It is truly awe inspiring to witness ‘Rhincodon Typus’ in their natural habitat. (I was truly appalled years ago in Dubai, when Atlantis Hotel captured a whale shark and put it in their hotel aquarium.  After a sustained local and international campaign, ‘Sammy’ the shark was allegedly tagged and released, but then he disappeared!)

My wife and I were guests on a two-day excursion recently to the Damaniyat Islands, some 18km off the coast of Seeb.September to November is the annual whale shark season in Oman, where these sharks and their pups migrate south to the warmer waters of the southern hemisphere.  During this period, there is a very good chance of an encounter.

Sure enough, as we reached the halfway point, the boat’s skipper, Mansoor, started yelling that there were three whale sharks ahead. In a flash he and I, and our host, were ready to jump from the boat alongside what can only be described as a giant shark. No amount of reading about how gentle and safe these mammals are can prepare you for the moment you are going to meet one face to fin.

We were very careful to enter the water some 5m away and if it hadn’t already, the adrenalin really kicks in once you are in the open ocean and swimming underwater with masks and snorkels.  As the bubbles cleared, I saw the first whale shark approaching from below, with its huge mouth open filtering water for plankton, it was mesmerising as it glided past, and with a deft flick of its 6ft dorsal fin, cruised away.

If that had been the last time I experienced such a moment, it would have been totally fulfilling.However, after a wonderful evening in a quiet, sheltered inlet beside one of the nine islands that make up Damaniyat, we set off for Al Mouj Marina.

The sea was quite calm and visibility was good and as we caught sight of the coast, three boats had gathered nearby.  Upon investigation we were completely astounded by what we witnessed next. A school of 23 whale sharks were feeding and appeared to be happy circling the boats.Within seconds we were in the water and filming and photographing these incredible creatures at close range.

Our seasoned captain remarked that he had never seen so many whale sharks in one place.   We were truly humbled in their presence and will always cherish the experience of what can only be described as a rare privilege in sharing their space for a fleeting moment.

See my short video of this experience at: https://bit.ly/2HEXJdj

There are important things to bear in mind when swimming with whale sharks, namely:

Although non-aggressive towards humans, these are huge and powerful creatures. Their dorsal fins could definitely cause you an injury.

It is believed that the whale sharks can sense sun cream and may react adversely to it, so wash that off before you swim with them.

Do not attempt to touch the shark or hold on to its fins.

Always be aware of the position of your boat and others in the vicinity as you don’t want to risk injury or worse from propellers.