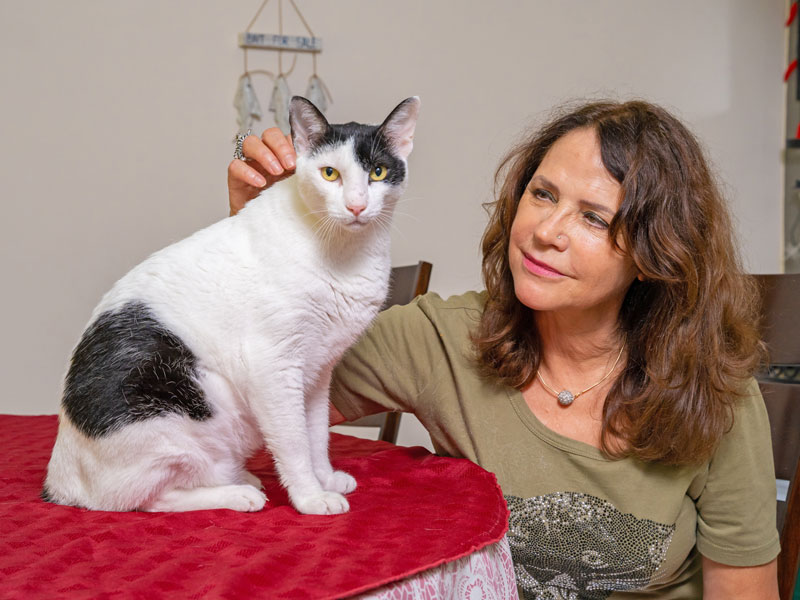 There’s a piano at one end of the parlour and a pool table neatly laid out, too, which give you the impression of elegance in a beckoning ambience. But amid the comfortable sofas placed around Persian rugs and tastefully placed table décor within the warmly-lit interiors, you get the feeling of being watched! Then out of nowhere two eyes peer at you and a well-rehearsed feline greeting is sounded.

Erina Boughton, an expatriate from South Africa who has made Oman her home for the past 15 years, has a soft corner in her heart for cats. But, if you look around her villa in Azaiba, every corner of her abode, too, seems to be devoted for the welfare of her feline friends.

Meet Pica,” she says, as you settle down in her parlour for a chat about her unique hobby of housing rescued cats – those which are either victims of some trauma or have been abandoned in the streets by their owners and have walked into her home through the doorway of her heart. “Pica is very friendly, she greets every one with a nice rub with her head,” said Erina as a tall cat  with comely eyes and patches of mustard, grey and white comes forward to greet you. The rest of the conversation then gets punctuated with affirmative purrs every now and then.

Recounting her past, Erina disclosed that her father instilled in his children the need to regard food with great respect as he had himself undergone dire situations when procuring lunch was often an ordeal for his parents. With those early lessons that had a far reaching impression, Erina said, she developed a compassionate attitude towards hungry animals in the street and always tried to provide them with food and succour.

She, however developed a strange affinity for cats around 2001 when her son had been sick with meningitis and had requested that they get a pet black cat to keep him company. A few weeks later, when Erina’s father passed away, the cat assumed the status of a comfort animal for the family and she took a liking for cats ever since, she disclosed.

The need to open up her home in Muscat to rescued cats, however, came forth around 10 years ago when she found many a pet abandoned in the street. Erina took efforts to get the felines treated and vaccinated at a pet clinic in town and brought them to her own house to look after them until she was able to find a foster home for them.

Today, Erina has a variety of cats in her home, each of which has its own attitude, poise, and pretense for attention, which she willingly submits to. She has also devoted a few rooms only for her cats, where she has installed cages for them to rest and feed. She has also named some of those who live with her – like Pica, Pucca, Rocky, Muscat, Tuppence, and they all feel totally comfortable around her all day long.

Apart from around 8-10 cats that live in her villa, there are around  20 more cats from the locality, including six ‘nesting’ on a tree beyond her compound wall, which all come to her backyard to be fed every day. While Erina has vaccinated and neutered the pets living in her villa, the other cats have been neutered and allowed to roam free so that they do not multiply in the vicinity of her home, she said.

Erina admitted that while she doesn’t mind feeding the cats everyday, she cannot afford to get all the cats vaccinated or make them subject to regular medical check which are quite s costly proposition. However, she calls on those who love cats to come forward to adopt some of them so that they could take up the task of getting them vaccinated and provide them a home.

Lamenting over the fact that a lot of people abandon their pets while leaving Oman, she, however, pointed out that taking a pet overseas is a costly affair wherein pet owners have to spend a huge amount for flights, quarantine facilities and other formalities. Therefore, many prefer to leave them behind though they do have the intention to take them along, she asserted.

When asked what she would do with the cats, if she someday had to leave Oman and move on in life, Erina quipped, “I can’t leave Oman because of my cats!” She, however, explained that she would take some of them with her because they have become like her own children while she would find foster homes for a few more. The other cats which live in the area would have to count on the benevolence of people living in the area for their meals, she sighed, adding that she would be happy to leave behind stocks of food for them to be fed.