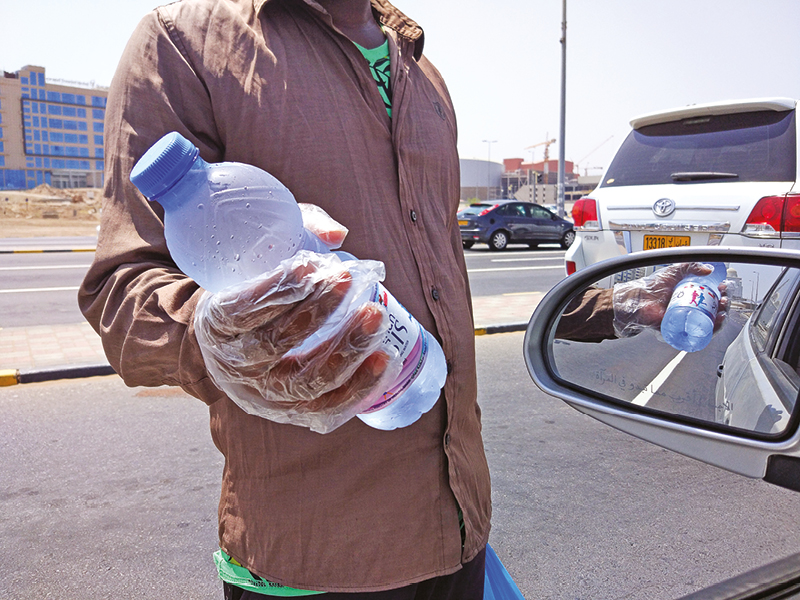 A group of expatriate workers, who lost their jobs and sources of income in the aftermath of the virus outbreak, have chosen to sell bottles of water at intersections and traffic signals.

Such activities are strictly prohibited in Oman. But these people, who are mostly from Bangladesh, say they don’t have any other way to make both ends meet.

Shiraz, in his 30s, sporting a rough beard and a confused look, has been selling water for the last 25 days at the traffic signal between Holiday Inn Muscat and Muscat City Centre.

“I buy bottles of water in large quantities at low price. I stock them in our common freezer and then sell them at normal prices which is 100bz,” Shiraz said.

Shiraz said he was selling water because he was no longer employed.

“The restaurants where I worked were closed for months because of COVID-19. When they reopened recently, I was told there was no work for me. I tried hard to find some other work. Out of desperation, I chose to come to the road with these bottles.”

Shiraz’s friend Alam said each of them can earn nearly RO10 by the end of the day, after ‘working’ from 7am to 7pm.

“The best time is at noon when most people return home but it is tough for us as the sun is very strong at that time,” he said.

Most of these men had been working with restaurants, small offices and construction sites. But now they are struggling for survival.

Seeb resident Ahmed al Touqi who works as a public relations officer, often encounters such men on the roads.

“I genuinely feel bad for these people,” he said.

“They lack work and they are desperate. I know this is perhaps not the right thing to do. We need to come up with a  solution at the earliest to help them.”

However, there are many who do not approve of these activities.

A banker who spoke on the condition of anonymity said that such people at times cause disturbance and encroach on the privacy of motorists.

“They also put their own and other people’s lives at risk by suddenly crossing the roads,” he said.

The Ministry of Labour, represented by the Joint Inspection Team in Muscat governorate, arrested 43 expatriates in July for selling drinking water in public places and roads.