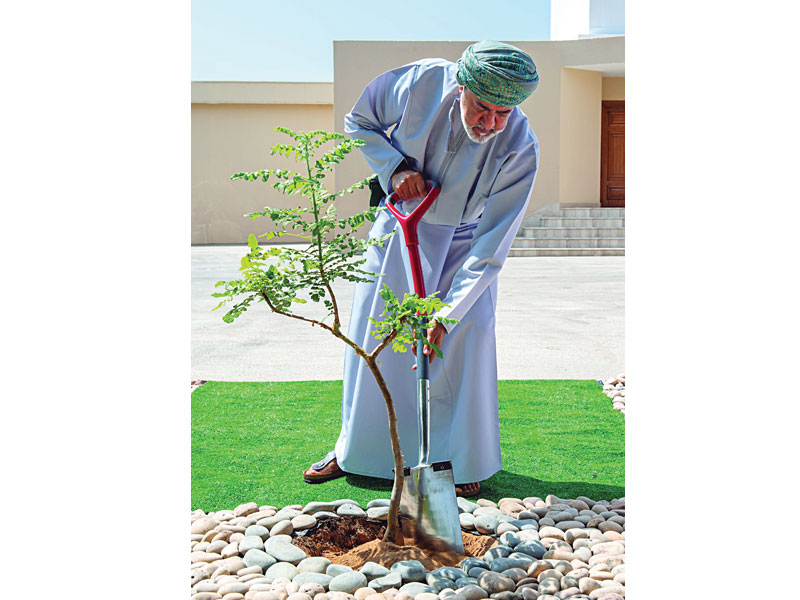 His Majesty Sultan Haitham bin Tarik planted a frankincense tree in Royal Razat Farm in Salalah on the occasion of his visit to the farm on Thursday.

His Majesty the Sultan’s initiative was met with great appreciation by various sectors of society, individuals and associations.

On its official twitter account, the Environment Authority stated, ‘The planting of the tree is a message from His Majesty Sultan Haitham bin Tarik that emphasises efforts to increase green spaces, and the attention given to the unique trees of our beloved country.’

His Majesty the Sultan’s initiative also prompted Omani Sidr Association to launch the hashtag ‘We plant with you’.

Speaking to Muscat Daily, Saud al Yazidi, a member of Omani Sidr Association, said, “We launched the hashtag to urge people to plant wild trees and increase green spaces in all parts of Oman. His Majesty the Sultan chose the frankincense tree because it has great economic significance and is part of Oman’s ancient heritage.

“We plan to launch a national campaign to include government and private agencies, besides community members, to plant wild trees and increase green spaces in Oman.”

The association was founded in 2017 and currently has over 300 members in various wilayats of the sultanate who have distributed 1mn seeds and planted 30,000 saplings of wild trees.

In keeping with its conservation efforts, the association raises awareness on recycling domestic waste water for use in agriculture and supports voluntary initiatives in the field of afforestation. “We cooperate with government entities such as Environment Authority and the National Field Research Centre for Environmental Conservation at the Diwan of Royal Court, and Haya Water to plant saplings.”

The association recently collaborated with Haya Water to plant 500 saplings in Masirah Island. Haya Water has a nursery that can produce 5,000 seedlings every four months, and the surplus water from its recycling plant can be used to plant millions of trees.

“We have set up a seed bank of many wild tree species such as Sidr, Al Samar and Shu’a. We have branches of the association throughout Oman to take the initiative forward,” Yazidi noted.

He informed that lack of water and overgrazing are the biggest impediments to their conservation efforts which have been overcome with the cooperation of community members and private sector institutions.

“We encourage setting up of nurseries to grow Omani wild tree saplings. I urge Omani youth to join us and participate in green Oman initiatives. I hope that all government agencies appreciate the initiative of His Majesty the Sultan and start planting trees, especially in schools and universities.”