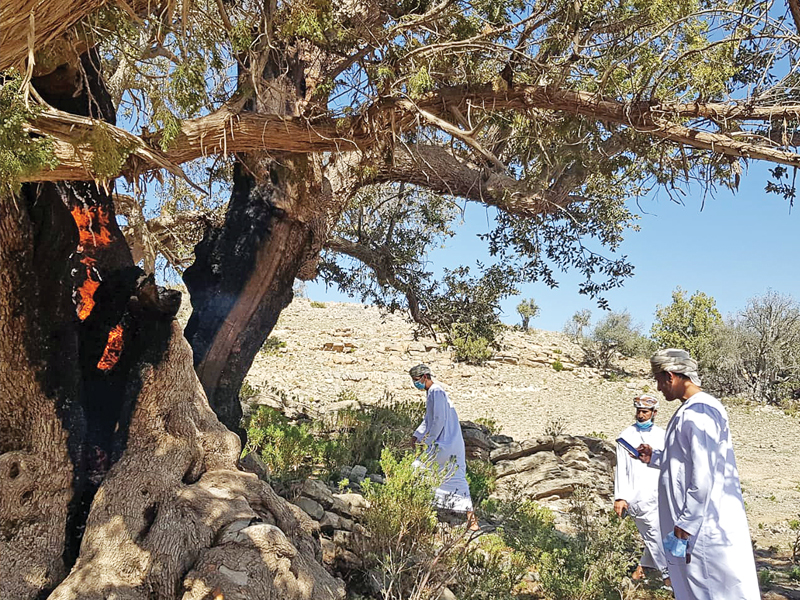 A video of rare wild juniper trees burning in Jebel Akhdar has evoked a strong reaction among people on social media.

A citizen brought to the Environment Authority’s notice, through social media, the instance of burning trees in Jebel Akhdar.

Nabil, who posted the video in his Instagram account, said, “Someone burnt wild trees and plastic in Jebel Akhdar. It is not the first time that this has happened. The Environment Authority must take stern action against such people.”

Speaking to Muscat Daily, Ahmed al Kindi, a news anchor of OmanTV, said, “I received a video of burning wild trees. It occurred on Wednesday.

“We have to preserve the wild trees because many tourists come from outside Oman to see them and camp there to enjoy them. We must preserve these trees; it is part of the unique Omani environmental heritage.”

He added, “I call upon everyone concerned to protect the trees in Jebel Akhdar. These natural assets have an invaluable economic, tourism and historical value that must be protected. It is important to put an end to this absurdity.”

Azza al Saqaria said on Twitter, “We want laws which deter people from burning trees, an action that affects Oman’s environment. Otherwise, nature will not survive!”

Rashid Ahmed tweeted, “Tourism activities have increased in the past few days. Strict laws and controls must be put in place on all tourist gathering areas because these practices pose a threat to the geology and nature of the place.”

Ayoub al Shaibani exclaimed, “Oh My God! I wonder why the trees were burnt?

“Camping should be allowed under strict procedures in order to preserve the environment and nature.”

Dr Amri said some visitors act irresponsibly and have an indifferent attitude towards nature and light fires near trees.

He said the trees in question are wild junipers and they catch fire quickly from cooking and grilling residues.

He also thanked the efforts of the Ministry of Defence, Public Authority for Civil Defence and Ambulances and the Royal Oman Police for their prompt response and cooperation when the reports were received about these violations.

The Environment Authority on Twitter said, ‘We confirm that these actions are in clear violation of the Environmental Protection and Pollution Control Law, and the act is punishable by imprisonment and a fine in accordance with Article 33 of the law for anyone who causes disruption in the nature conservation areas.’

It added, ‘The authority will not tolerate such violators. We call on all visitors to these areas to quickly report any violations to the hotline 80071999.’