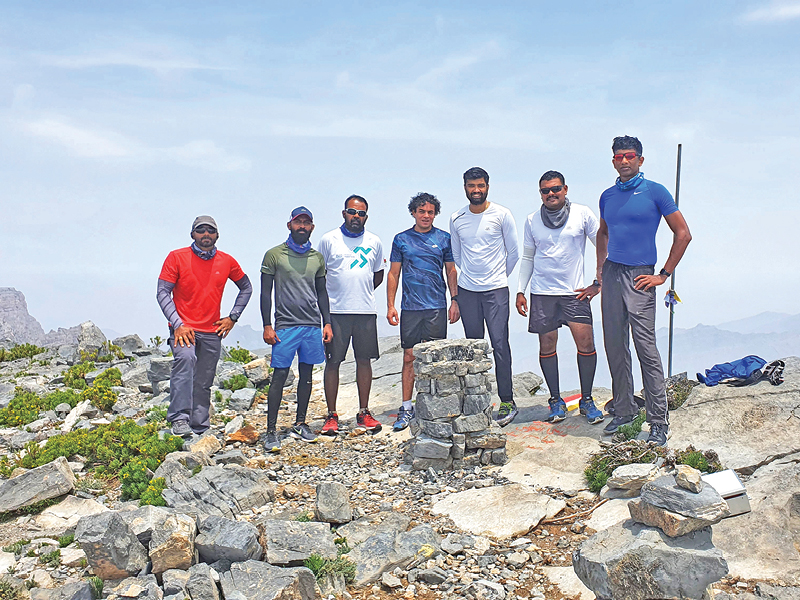 Jebel Shams, one of the most popular peaks among hobby hikers as well as professional mountaineers in Oman, is always in demand. “Reaching there is no mean feat and hikers have to travel almost 25km through rough terrain to reach its base,” says Aziz K who narrates his trip to the top of Oman with a band of boys

Jebel Shams, the highest summit in the Gulf located around 250km from Muscat, never goes out of fashion, be it during peak summer or sub zero temperatures in winter.

Ask those who have been there and they will swear that they can never really have enough of Jebel Shams. While some hikers know this terrain like the back of their hand, they take delight in frequenting this peak with different groups all throughout the year.

Frequented by both, tourists and local citizens and residents, Jebel Shams is is certainly a favoured destination in Oman among hiking fanatics. “In my case, it certainly was more of enthusiasm and less of fun, as I struggled along this tough trek with my fellow mates whose only aim was to scale the heights and reach the summit,” says Aziz K, an avid hiker.

Aziz joined a group of enthusiastic hikers led by one Subhash, a passionate hiker, trial and road runner. The others included his constant companion, Sudheer, Machu, a fitness freak with a quest of conquering the hills and wadis of Oman, besides others like Jitesh, Binny, Avnish and Jaseer, all of whom had the same zeal for straying off the beaten path and discovering new sides to themselves. All had one conquest in mind – the summit of Jebel Shams, in good time and good shape!

We met at Rusayl at about 3.45am and our journey to Jebel Shams from there took 3 hours. In the course of our discussions, Machu pointed out a dome like structure high up in the mountains and said, “We need to reach somewhere up there.” I tried to hide the feel of sarcasm popping up in my mind, as I wondered as to what was so great about so small a feat!

Packing up individual bags with essentials, we started off at 7am. Subash as expected, took the lead and moved ahead steadily. There were several breaks in our journey mainly for photographing some breathtaking moments. Jithesh, the only bachelor in our group, was especially enthusiastic about posing for pictures, but once Jaseer realised that there was no end to the photography session, he too trudged on.

We hiked along for many kilometres, up and down the rocky and sometimes treacherous terrain. To my dismay, no matter the distance covered, the dome up in the mountain remained the same size visually, which reduced my previous sarcasm considerably. We had a tough time getting to the half way mark itself.

Somewhere in between, a strange loud noise from somewhere startled us, and we found a group of donkeys nearby who were voicing their protest over our intrusion on their domain. Along the way, I stopped to take a small breather only to find that Machu, too, had left me to move on and I continued alone, weary and tired, more mentally than physically.

Just as I started losing my bit of gusto, I saw a lone Omani hiking down enthusiastically. If he could do it all alone, why can’t I, who had an advantage of being with a group, complete my trek? It was extremely difficult, but eventually I reached the summit along with the others, and became one of the few ‘Malayalees’ to have completed the Jebel Shams summit hike!

We resumed our trek downhill, scaling the same rocky paths laboriously. The thought of climbing down the 12.5km was, indeed, daunting, but there was no other go. While the others made their descent rapidly, Sudheer and I were literally struggling. Moreover our water reserves were also almost nil and by the time we completed 7km, we were left with empty bottles.

I took out my cellphone to call my friends who had preceded us, but phones require an active network to function, and that was something which currently seemed unavailable.

Acute thirst propelled us to push ourselves another kilometre and in the meantime, I had finished off the water from Sudheer’s bottle, too. He pointed out to a structure far off, and said, “that resort is our destination.”Acute thirst and exhaustion along with desperation led me to visualise the worst.

The end of the trek saw us beside our vehicle, and after completing the mandatory stretching exercises, we started perusing the photographs taken in the course of our adventurous climb.

Subhash was elated to learn that Strava (a popular internet app for tracking human exercise) had proclaimed him to be in the fifth position worldwide among those who had completed the Jebel Shams summit trek in the fastest possible time. But he was also disappointed that he was nowhere in the pictures we had taken en route.

Now, he set before himself a challenge to reach the first position in Strava, in his next attempt at scaling Jebel Shams, and also take a picture of himself atop the summit.