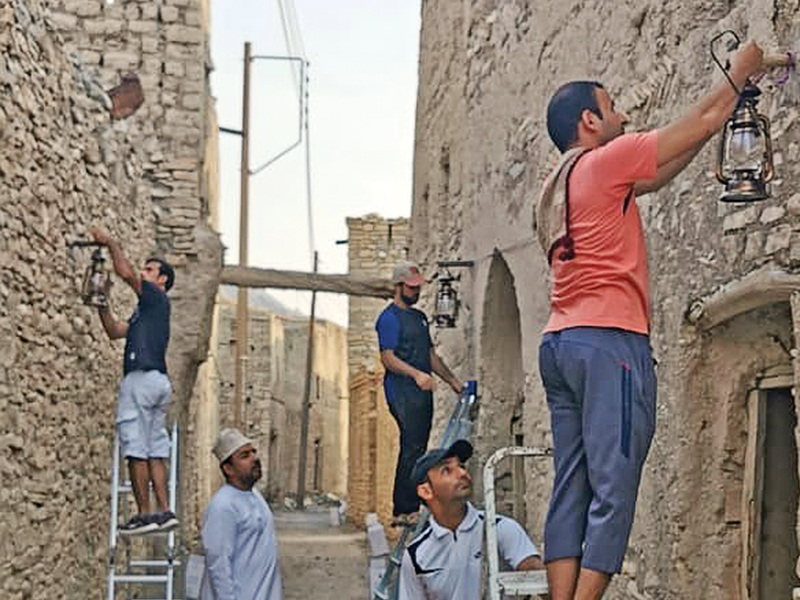 People of Immti, wilayat of Izki in the Governorate of Dakhliyah, have pooled in resources and time to restore the old traditional houses called Harat al Ayen in the area.

The voluntary initiative – Immortalising the Archaeological Moment in Art – has been led by the citizens of the Harat neighbourhood in Immti village.

Speaking to Muscat Daily, the group’s founder Falah Salim Khalfan al Toobi, said, “Some of the oldest villages in Oman are settlements in the wilayat of Izki. It has many historic landmarks, including aflaj and traditional houses. Harat al Ayen has several houses built of clay designed to traditional Omani architecture. The falaj that waters the greenery either side of the hara still works.”

Toobi and his band of volunteers started the project, sponsored by artist Maryam Mohammed al Zadjali, in early 2019. Several art camps and events were held in the wilayat, and the gate – called Sabah – on the hara was restored, which now stands like a fortress in the village.

“We have hired a contractor specialising in antiquities restoration. We used clay and wood mixed with plaster to restore the houses,” Toobi informed.

Harat al Ayen was a city with many gates, mosques and schools – a centre of learning – with hardworking people.

“Our project includes restoration of historical landmarks in Harat al Ayen, including houses, a public majlis, markets, wooden doors, cleaning the falaj and most importantly, spreading cultural awareness on the significance of the historical heritage of the neighbourhood,” Toobi said.

The group has also installed lamps all over Harat al Ayen to keep the area illuminated at night. Over 30 youngsters from the 20 families in the neighbourhood work on the restoration from 6.30am to 3pm every day.

“The work is in progress; there are many elements that still need restoration, including the internal 150m road, some towers and the area surrounding the falaj. We will also install sewage pipes soon,” Toobi said.

“We are grateful to the residents of the village and the Ministry of Heritage and Tourism for their help, and we hope the private sector companies continue their support in order to complete the restoration of the whole neighbourhood,” Toobi said.

Every Saturday, the group also sets up a special market for women and craftsmen families to promote their handicrafts.