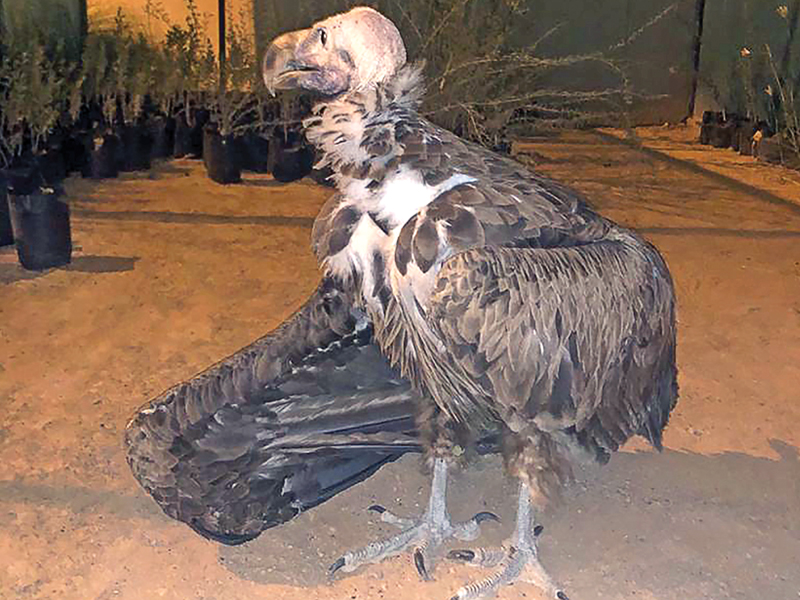 A rare vulture, listed as endangered on the International Union for Conservation of Nature Red List of Threatened Species, was found injured in Buraimi governorate in critical health on Monday, according to the Environment Authority (EA).

The injured lappet-faced vulture or Nubian vulture (Torgos tracheliotos) was found in Wadi Ajran by a citizen and handed over to the authority.

Speaking to Muscat Daily, Mohammed bin Salem al Balushi, head of the Nature Conservation Department in Buraimi, said, “Buraimi resident Mohammed bin Rashid al Gaithi found the vulture which was in a critical health condition and handed it to the Environment Authority office in Buraimi.”

He added, “The bird is a rare and endangered species of vulture found in the northern regions of Oman. It will be provided with the necessary medical attention and then released into the natural environment.”

The Environment Authority thanked the citizen and urged everyone to report such incidents concerning wildlife, to it.

According to BirdLife International, only a small, very rapidly declining lappet-faced vulture population remains, owing primarily to poisoning and persecution, as well as ecosystem alterations. Recently published data suggests that the population of these birds in Africa is declining rapidly.