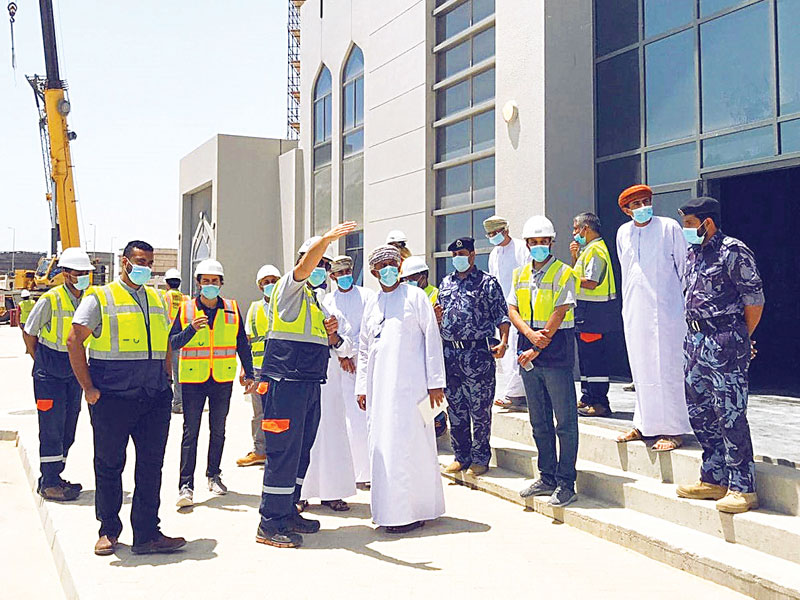 The Special Economic Zone at Duqm is gearing up to handover the main buildings in the customs station at the Port of Duqm.

This comes as part of ensuring the overall readiness of all facilities at the station to provide key services for export-import operations through the commercial berth at the Duqm Port.

In a press statement issued by Oman’s Public Authority for Special Economic Zones and Free Zones (OPAZ) on Wednesday, Eng Yahya bin Khamis al Zadjali, in-charge of managing operations of the Special Economic Zone at Duqm, said that the construction works in the customs building, agriculture and fisheries building and the clinic are nearing completion and they will be handed over to the concerned bodies in coordination with the Port of Duqm.

“Oman Company for Development of Special Economic Zone at Duqm (Tatweer), a fully-owned entity by OPAZ, is currently striving to accelerate the works in the buildings and getting the main gate of the port ready for commercial use,” Zadjali said.

He also pointed out that H E Dr Ali bin Masoud al Sunaidy, chairman of OPAZ, paid a visit to the buildings established at the Port of Duqm last week. The visit was aimed to witness the readiness of these buildings prior to implementing Bayan System, as well as to meet with officials from Royal Oman Police and Ministry of Agriculture, Fisheries and Water Resources. Present during the meeting were also representatives of the main contractor of Duqm Port, Special Economic Zone at Duqm and Port of Duqm Company.

The meeting highlighted the plan for launching the customs building and the agriculture and fisheries building in order to facilitate the process of customs inspection on exports and imports coming to the Port of Duqm at the same location, as well as to release all agriculture and fish consignments.

Zadjali further said that the coordination is in progress with the Ministry of Health to operate the specialised clinic located in the port’s customs station.

Moreover, he confirmed that the bids submitted for the tender for designing, manufacturing, supplying, installing, testing and operating container cranes for the commercial berth at Duqm Port are currently under review. There will be 12 rubber-wheeled cranes and four container cranes to shift containers from ships to the dock and vice versa.

“The tender will soon be awarded to the selected company. The Port of Duqm is currently using mobile cranes until the new main cranes are installed during the coming 18 months,” Zadjali added.