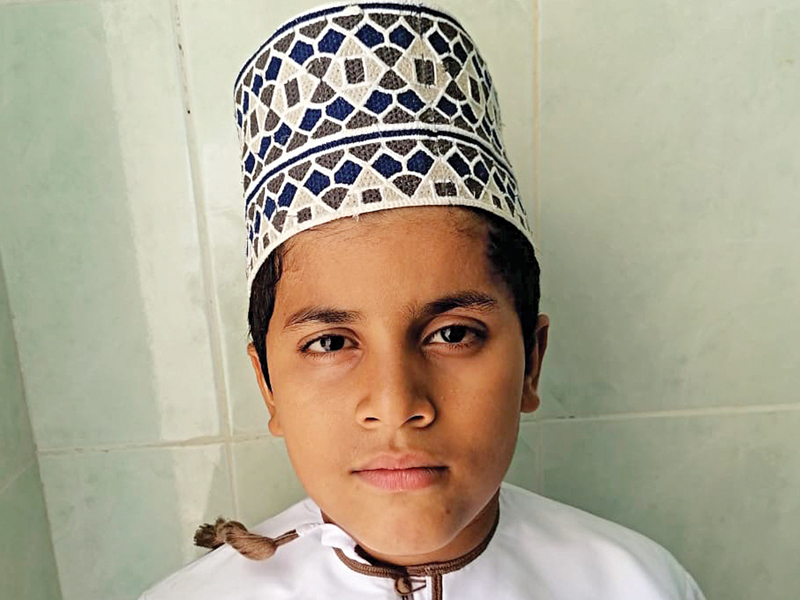 A nine year old boy is being hailed a hero for saving his family from a fire that engulfed their home in Bahla, Governorate of Dakhliyah.

The fire broke out at about 9:30am on Sunday, September 6, in Al Moatasem Ahmed Saleh al Shaqsi’s house.

His presence of mind and quick actions saved the lives of his family members.

Al Moatasem’s mother, sisters – six and four – and 14 month old baby brother were in the family house at the time.

Speaking to Muscat Daily, Al Moatasem said, “I was with my baby brother watching TV on Sunday morning, while my other brothers were outside. My mother was in the kitchen.”

It’s when he saw smoke in the majlis.

“I hurried to my mother and found her on the kitchen floor. She had fainted from smoke inhalation,”

Al Moatasem recalled the dramatic turn of events. He rushed out of the house carrying his baby brother and then took his two younger sisters outside, after which he dragged his mother by her legs away from the fire.

“I called my neighbours for help. They responded quickly and requested help from the Public Authority for Civil Defence and Ambulances (PACDA), who came within a few minutes and extinguished the fire.”

Asked how he knew what to do, Al Moatasem said, “My father taught me that in case of a fire, take the little ones out and go in the opposite direction of the source of fire.”

According to his father, Ahmed Saleh al Shaqsi, the fire was caused by a short in an electric charger.

“I work in the desert far away from my children. I thank my son for his quick thinking and rescuing the family.”

The guidelines issued by PACDA on the prevention of fire includes smoke detectors as a must in homes, besides ensuring the maintenance of these devices. But guidelines that are not legally enforced are seldom followed.