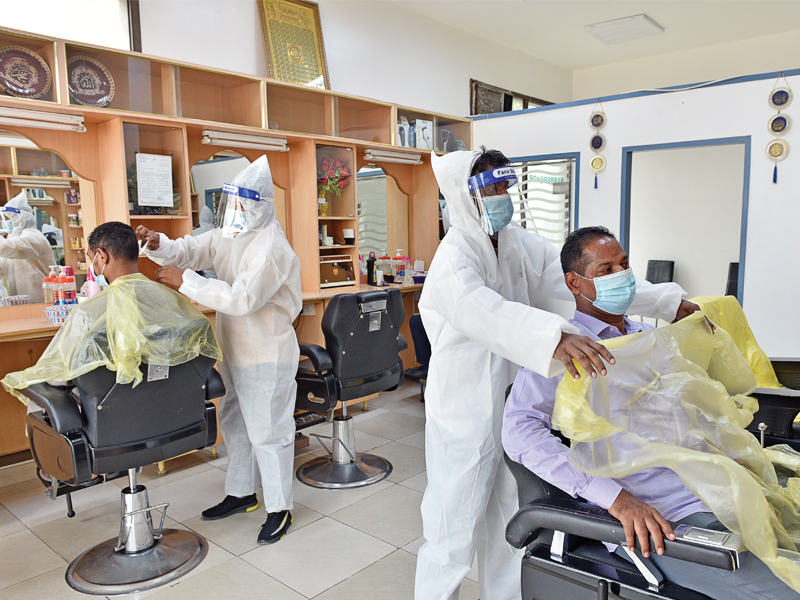 There is a collective sigh of relief and excitement over the announcement to reopen barbershops, salons and beauty parlours among workers and customers. The shutting down of these activities for almost five months caused many customers inconveniences, but caused much hardship to the workers and owners of such businesses.

“It is not always easy to cut your hair and beard and groom yourself at home. Barbershops are a basic need and their closure posed a major problem for me. I’m really relieved following the reopening. I prayed for last few months for them to open,” said Anwar Abdullah, a private sector employee.

“I was happy to hear the news. I visit parlours frequently. I love availing all the services offered at parlours, be it hair do, manicure, pedicure or facials. In the last few months, I’ve tried to do things myself but it’s not easy,” said Afraah al Abri, a government employee.

The excitement at the reopening of these businesses is almost palpable among the service providers. Beauticians and barbers alike narrated tales of woe during the shutdown which left them with no income for months at end.

Nasreen Ali, a beauty parlour worker in Muscat, said, “Life hasn’t been easy for me the last few months. The parlour is my only source of income. Now I am looking forward to putting in all my efforts so that I make up for lost earnings.”

However, Nasreen is aware of the fact that customers may be initially wary of visiting parlours.

“But I assure them that all precautionary measures will be taken into account,” she said.

M Ihsan, a barber in Amerat, had a similar account of hardship during the closure.

“Life has been tough, just to make ends meet but we have to thank God for protecting us. I am so excited now and we are ready to face the new challenge. Hopefully, we will get back to normal soon.”

Ihsan said he realises the responsibility he has in terms of following safety norms and the preventive measures set by Muscat Municipality.

Another barber, Abu Aiman who runs a shop in Ruwi, said, “We are thankful to our Omani friends who helped us during the five-month closure. Some of them offered ration, while others gave money too. The announcement of the reopening is a big relief.”

Elaborating on the precautionary measures barbershops have been instructed to follow, Aiman said, “We now have to wear PPE (personal protective equipment), face shield and mask. As per Muscat Municipality’s earlier guidelines, we were already using disposable razors and disposable aprons. We have also rearranged our waiting area to maintain social distancing guidelines.”

M Mahmood was seen on the first day at a barbershop in Ruwi. He got his hair cut after five months. “It feels so refreshing and light. After the haircut, I plan to go straight home from the salon and sleep for a couple of hours. I feel so good,” he said.

Muscat Municipality’s guidelines for barbershops include restricting the number of customers to two (as per size of the shop). Additionally, waiting customers are not allowed to wait inside the shop and reusable tools should be sterilised for every customer.

Arun Uzagare, proprietor of Khana Khazana in MBD, Ruwi, said, “We have been allowed to serve dine-in customers after almost five months. We are following all the guidelines set by the Supreme Committee, including the use of disposable cutlery, tablemats and menu card.”

Uzagare is also making sure the restaurant has less than 50 per cent of its full seating capacity. “All this will add to costs but the safety and comfort of our customers is our priority,” he noted.

For fitness enthusiasts too, the reopening of gyms has come as a big relief.

“I have been waiting for this day for many months. This is good news. We will start gyming soon. It will not be as much fun as it was before because only 50 per cent capacity will be allowed but health comes first,” said Taha Hameed.