WOMEN TO THE FORE 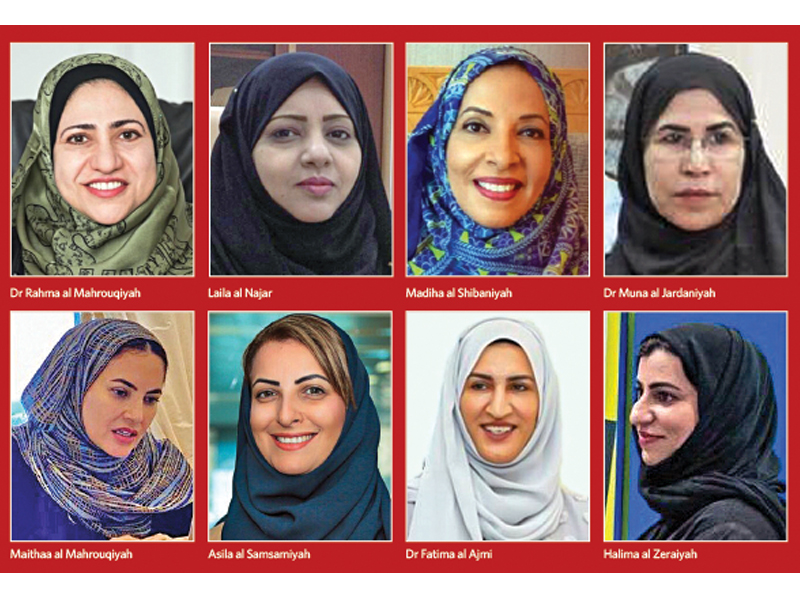 Omani women hailed the recent Royal Decrees appointing eight women in the government, including three ministers. Women of the sultanate have proved themselves in every sector and actively contributed to national development.

Hailing the new appointments, Sayyida Hujaija Jaifer al Said, chairperson of the Association for the Welfare of Handicapped Children, said, “Omani women play a major role in serving the nation in various fields. His Majesty Sultan Haitham bin Tarik has accorded special attention to women and presented them equal opportunities in several sectors. These appointments reiterate the fact that every woman has a role to play in nation building.”

According to Sayyida Hujaija, these appointments show His Majesty the Sultan’s confidence in women and their role in the progress of the sultanate. “Therefore, as Omani women, we should work harder to achieve our people’s aspirations. We thank His Majesty the Sultan for the confidence that he has on women, and we promise him our loyalty and obedience,” she said.

Sayyida Basma al Said, mental health counsellor, psychotherapist and founder of Whispers of Serenity Clinic, said the appointment of eight women in the government reflects His Majesty the Sultan’s trust in involving women in nation development.

“Women have always been considered partners with men in the process of making the future of Oman. We urge Omani women everywhere – villages and cities – to roll up their sleeves and contribute to the process of economic and social development of the nation.”

Sayyida Basma believes the recent Royal Decrees will promote the objectives of Oman Vision 2040 and reflect the aspirations of the people of Oman.

“As Omani women, we will work hard to build the sultanate further,” she pledged. “The new appointments reflect the status of women and raise awareness of their role in advancing sustainable development,” said Dr Badria al Wahaibi, director of the Social and Cultural Research Department in the State Council, adding, “and motivates them to give their best to this generous nation.

“Omani women have been entrusted significant roles, even High Commissioners and prestigious positions in the state and parliamentary councils, to fulfil the aspirations of the people of this country and realise the Oman 2040 vision.”

Dr Badria urged Omani woman to work hard and continuity to contribute to the growth and development of the country.

“May God protect you, Mawlana Sultan Haitham, and make you an asset and the pride of this country and its people. Thanks to your wise approach, clarity of vision and your inimitable policies, the people of the country in general and women in particular will obtain everything they want in terms of success and development,” Dr Badria said, adding that what has been achieved today is a matter of pride for every Omani woman.

“The Omani woman is distinguished by the rights and privileges she enjoys, which is unlike the women of many other countries,” said Dr Badria.