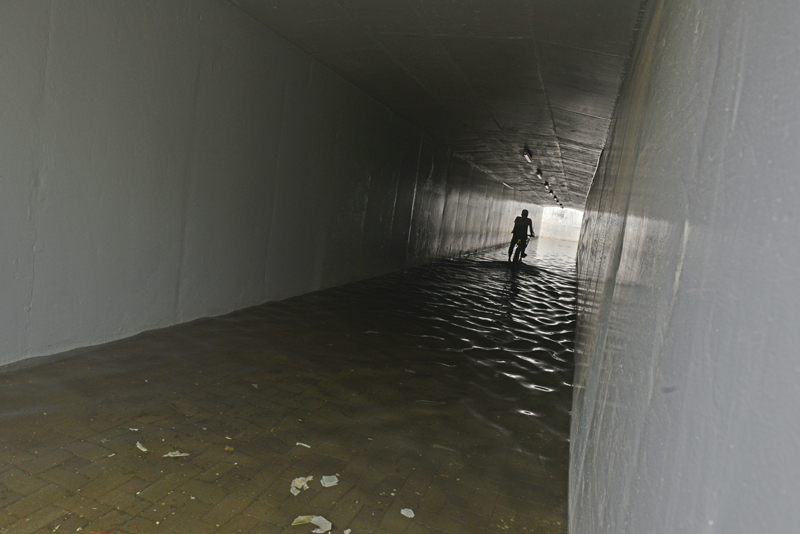 The flooding of a pedestrian subway near Wadi Kabir Park has posed health and safety risks for residents in the area. As the nearest safe passage to cross the road is from the Wadi Kabir roundabout, many pedestrians feel compelled to jaywalk directly into the fast-moving traffic to avoid walking up to the roundabout.

Kumar, who commutes on a bicycle between Wadi Kabir and Ruwi, and was using this pedestrian subway daily, said, “It was safe and easier for me and my friends to use this pedestrian subway to cross the road. But due to the flooding, I am forced to cross the road. I know it is wrong and quite risky, but due to the COVID-19 pandemic, we are worried about using the flooded subway as we do not to how contaminated that flooded water is. It smells awful too, I assume it may be sewage water.”

Supriya Jain, a resident of the area and who takes a walk on the stretch regularly, said, “During our evening walk I saw the pedestrian subway shining with a nice reflection of lights on the ground, but upon a closer look, I realised it was flooded with water. It must be sewage water because it has a foul smell.

That is when I realised why for last few days a lot of people have been seen crossing the road. I hope the concerned authorities fix the flooding problem as soon as possible because this subway is mainly used by those who do not have vehicles.”
Babu, another subway user, said that he tries to use the pedestrian underpass whenever there is less water. “The water smells bad and I felt it is till knee level today. If it was clean water, I would have crossed it. Now I am forced to take the longer route by using the Wadi Kabir roundabout.”
He added that he has often seen municipality workers flushing out the water. “There seems to be some problem as water slowly but continuously floods the subway.”

Mohammed, a gardener who works daily on both sides of the road, said that he too has seen a lot of people running across the road due to the flooding in the subway. “We know it is not safe to cross the main road like this but people try to save time and effort by doing so.”
Yusuf, whose office is on the other side of the road from his accommodation, said that the water level in the subway was quite high. “Earlier it used to be quite shalllow. The water smells quite bad, which means it is dirty, and for me, cleanliness is a priority. If my clothes get wet with this water, I will not be able to pray.”

(Text and Photo by Syed Fasiuddin)