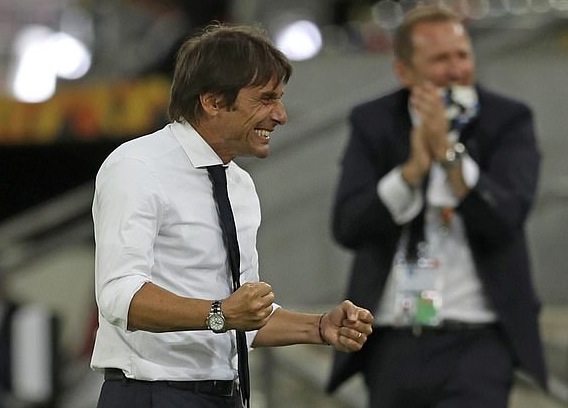 Danilo D’Ambrosio got the fifth for Antonio Conte’s Italian League (Serie A) side.

Conte said that his team produced a ‘super and courageous’ performance and made their Ukrainian opponents look average’.

The win helped the Nerazzuri reach their first European final in a decade.

Conte told Sky Sport Italia: “I think we reached the final playing against a team that we made look less strong than it was, but Shakhtar have a lot of talent and we stopped them playing with the pressing all over the pitch.

“They have a lot of quality in their passing, also pace, but we did well to force them into defending, which we know full well they aren’t as comfortable with as keeping the ball.

“We played with courage, had the right plan, played a very European game in the right way and the players deserve all the credit.

“It was a super performance and we made Shakhtar look average.”

After Juventus and Atalanta were both knocked out of the Champions League after lockdown, Inter remain Italy’s only hope of achieving European glory this year, with them taking on Sevilla in the Europa League final later this week.

A win on Friday over their Spanish opponents would cap off a promising first season in charge at the San Siro for Conte, who is aiming to reinstall Inter to the top of the European football scene.

The Italia boss believes the experience of a final will do well for the club in the long-term.

He said: “It’s satisfying for everyone. The most important thing for me is that many lads are playing this type of game for the first time.

“They are gaining experience at an important level in a tournament that Italy have not been protagonists in for a long time.

“Sevilla have a great deal of experience, I think they won it four times in the last six or seven years. However, we have enthusiasm, hunger and the desire to amaze people.”

The Inter boss added: “As I always said, we have to leave the field with no regrets. We must know that we’ve given our all, done everything we possibly could, so if we do lose, it’s because the opponents were better.”

Against Shakhtar, Martinez struck his first in the 19th minute, heading in from Nicolo Barella’s cross after the midfielder had been gifted possession from a dire attempted clearance by Shakhtar goalkeeper Andriy Pyatov.

Danilo D’Ambrosio rose highest in the area to head home Marcelo Brozovic’s corner just after the hour before Martinez side-footed in his second to seal the win and Lukaku came to the party with two neat finishes of his own.

Former Manchester United striker Lukaku has now scored in ten straight Europa League games and has 33 goals for the season.

Shakhtar’s only real chance was admittedly a very good one, but Junior Moraes headed straight at Samir Handanovic from just a few yards out for what would have been an equaliser.

Inter now have the chance to claim a first trophy since 2011 when they face Julen Lopetegui’s Sevilla on Friday.

It will be the Italian club’s tenth European final. It has been a barren nine seasons since they claimed the Club World Cup and Coppa Italia in 2010-11.

Inter finished as Serie A runners-up to Juventus this season, while they were also beaten in the Coppa Italia semifinals by eventual winners Napoli.

Conte, who was sacked by Chelsea in July 2018, has taken a squad containing discarded Manchester United trio Lukaku, Alexis Sanchez and Ashley Young, as well as ex-Tottenham midfielder Christian Eriksen and on-loan Chelsea wing-back Victor Moses, and forged a whole greater than the sum of its parts.

One of those parts, though, is having a truly stellar campaign to prove all his doubters wrong.

Lukaku was surplus to requirements at the Red Devils but has made himself indispensable with the Nerazzurri with his pace, power and accurate finishing – qualities that have enabled him to be involved in 18 goals in his last ten Europa League games (14 goals and four assists).

Another goal in the final and he will match the achievement of Brazilian striker Ronaldo, whose 34 goals in all competitions in 1997-98 is the most by an Inter player in their debut season at the club.

Netherlands manager Ronald Koeman, who played for the Catalan giants between 1989 and 1995, is set to replace Setien at the Nou Camp.

A new coach will be announced ‘in the coming days’, said the club.

Barca’s thrashing by German champions Bayern on Friday was the fourth time in the past five years they have been knocked out at the quarterfinal stage of Europe’s elite competition.

Setien, who replaced Ernesto Valverde at the Nou Camp, had said after the defeat that it was ‘time for us to review and take the decisions which are needed for the future’.

After he was sacked on Monday, Barcelona said: “This is the first decision within a wider restructuring of the first team.”

The club also announced next year’s presidential elections, scheduled for June, will be brought forward to March 15.