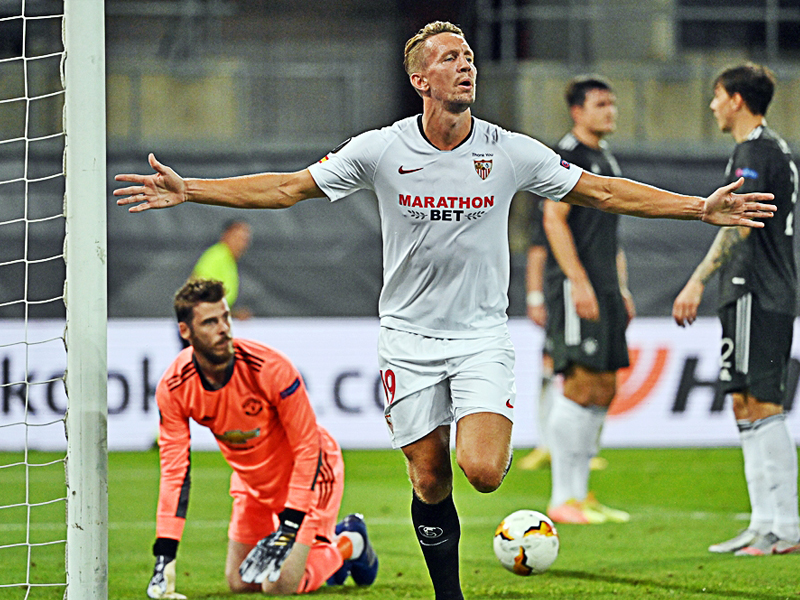 Dutch striker Luuk de Jong came off the bench to end Manchester United’s Europa League hopes as Sevilla won 2-1 to book a spot in the final.

Sevilla shattered Manchester United’s hopes of ending the season with silverware as they won 2-1 in a hard-fought Europa League semifinal in Cologne, Germany, on Sunday.

The Spanish side will meet in Friday’s final in Cologne either Inter Milan or Shakhtar Donetsk, who play in Dusseldorf on Monday night.

Ole Gunnar Solskjaer’s United lost their third semifinal this season despite taking the lead when Bruno Fernandes scored their 22nd penalty of the season after Marcus Rashford was fouled by Diego Carlos in the ninth minute of the match.

United’s fate was sealed when they missed a succession of chances early in the second half as Sevilla keeper Yassine Bounou emerged as the hero, denying Anthony Martial several times.

And Sevilla, who saw off Wolverhamton Wanderers in the quarterfinal, secured their place in the final when substitute Dutch striker Luuk de Jong swept home a cross from Jesus Navas with 12 minutes left, United punished for poor defending which led to recriminations as Fernandes confronted Victor Lindelof in the aftermath.

Manchester United’s long season came to a bitterly disappointing conclusion as they missed out on the chance to lift their first trophy since they won this tournament under Jose Mourinho more than three years ago.

And they have only themselves to blame for a lack of killer instinct in front of goal, especially in that opening phase of the second half when Bounou denied them, especially Martial, but United simply had to take one of those chances.

It left Sevilla in the game and, as this talented side have proved before, they are experts at finding a way to win in the Europa League.

Sevilla have reached their sixth UEFA Cup/Europa League final, at least two more than any other side.

And so it proved with De Jong’s late goal, helped by awful United defending as they switched off from Navas’ cross, with Lindelof and Aaron Wan-Bissaka culpable.

United rescued their season in the second half of the campaign, fuelled by the signing of Fernandes, but losing three semifinals in a single term is a poor effort.

Solskjaer’s season has finished respectability with a third-placed finish in the English Premier League but weaknesses were exposed by the loss to Manchester City in the EFL Cup semifinal, Chelsea in the FA Cup and now this defeat by Sevilla.

United have now been eliminated from European competition by Spanish opposition for the third consecutive campaign.

A happy Sevilla manager Julen Lopetegui said, “The team played with heart, they believed in it, they ran. We got the ball back in the second half and played much better, and then the goal came. We are very happy to have a place in the final, we are happy for the joy of the boys, who deserve it. They are an extraordinary group, they deserve to play in the final.”

Speaking to BT Sport, Solskjaer said: “It’s one of them if you take chances you win comfortably – not always the case in football. We had moments in spells in both halves where we should have scored a few. We have a young team – some spells showed that this group of players will have to learn and get some consistency in their play.

“When we get the ball down and create chances it’s scintillating at times. The keeper had a fantastic game. It’s disappointing we didn’t score because we’ve got players with that quality.

“Since February we’ve been fantastic. Then again it’s disappointing to go out. We’ve come quite a distance. Exciting to work with the boys but you could see at the end – tired legs and tired minds. We definitely need to improve to move up the table and take steps in the cups. I’ve never had three semifinals in one season.”

United defender Harry Maguire said his side ‘have to take it to the next step’ following their Europa League exit.

“Losing is not acceptable. Getting to semifinals isn’t acceptable. [Winning a trophy] will happen soon. We want to win it as soon as possible,” he said

“The best team lost. They punished us for missing chances. We conceded from two crosses which is not good enough.

“We worked our socks off and deserved to win and get through. We fell short in a semifinal for the third time this year.”