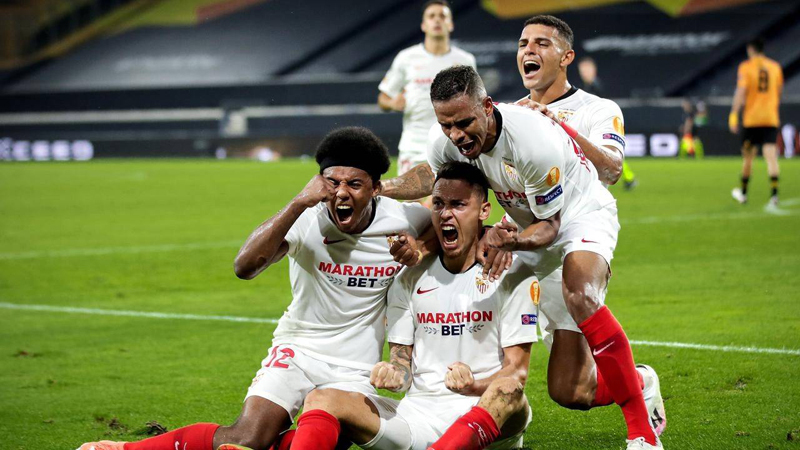 Sevilla booked their place in the semifinals of the Europa League on Tuesday after Lucas Ocampos’ late header broke Wolverhampton Wanderers’ hearts, while Ukraine’s Shakhtar Donetsk trounced Swiss side Basel 4-1 in the other quarterfinal match of the night.

Five-time Europa winners Sevilla will now face Manchester United in Cologne, Germany, on Sunday, thanks to a stunning header from Argentine Ocampos with less than two minutes left on the clock which gave them a deserved 1-0 win at the MSV Arena in Duisburg, Germany.

In the other German city of Gelsenkirchen, Shakhtar cruised past FC Basel to set up an exciting semifinal clash with Inter Milan on Monday.

Sevilla win meant that they are now unbeaten in 19 matches in all competitions.

“I am very proud of my players. We needed to have lots of patience against a very good team,” said Sevilla coach Julen Lopetegui to BT Sport.

“We have ambition we work very hard… but we are going to play against Manchester United… the biggest team in world football.”

English Premier League outfit Wolves thought they were set to make the perfect start in the 11th minute when Adam Traore set off on a sensational surge towards goal from his own half and was chopped down in the area by Diego Carlos.

However Raul Jimenez, who had scored all of his previous eight penalties for Wolves, sent a weak spot-kick towards Sevilla goalie Yassine Bounou, who easily batted the Mexican’s tame shot aside.

There were claims that Bounou had left his line while Sevilla players seemed to enter the area before the penalty was taken, but in any case that was to be Wolves’ last shot on target of the match as chances became hard to come by.

The first good chance of the second half came when Sevilla’s Jules Kounde met Suso’s beautifully flighted cross in the 66th minute, but the Frenchman had to stretch for the ball and sent it looping over the bar.

Eleven minutes later Wolves’ goalie Rui Patrico did well to tip over Ever Banega’s dipping free-kick as Wolves began to rock, but the Wolves goalkeeper could do nothing to stop Sevilla’s winner with two minutes left.

Banega was again at the heart of the action, whipping in a fizzing cross that Ocampos did brilliantly to guide into the bottom corner and send his team into the semis.

Shakhtar’s commanding win over Basel will give Inter Milan something to think about ahead of their semifinal clash on Monday.

“I’m feeling amazing because we have worked hard and we trust we can reach the final,” said goalscorer Junior Moraes.

“If you want to test yourself, you have to play against teams at this high level.”

The Ukrainian side got off to a flyer thanks to Brazil-born Moraes, who headed home Marlos’ corner with less than two minutes on the clock, and they never looked back from that point on.

Alan Patrick put the result beyond doubt from the penalty spot with 14 minutes left after Taison’s burst into the box was ended by a clumsy challenge from Basel defender Yannick Marchand and Dodo added a fourth, before Ricky van Wolfswinkel hit a late consolation.