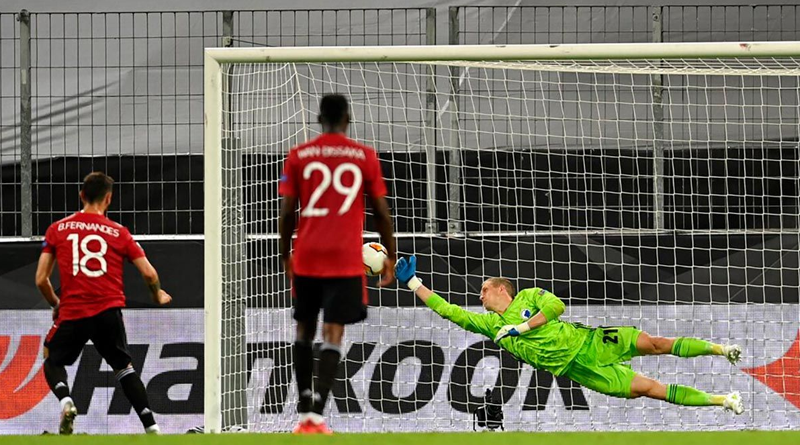 to scrape into the Europa League semifinals in Colgne, Germany, on Monday.

In the other match of the single round Europa League knockout quarterfinals on Monday, Inter Milan advanced with a hard-fought win over Bayer Leverkusen 2-1 in Dusseldorf, Germany.

United, who won Europe’s second-tier competition in 2017, will meet Sevilla or Wolverhampton Wanderers on Sunday for a berth in the final after grinding down the Danes and their inspired goalkeeper Karl-Johan Johnsson in an entertaining game.

In sweltering heat, United’s young team controlled the lion’s share of possession but had a hard time creating clear chances until Andreas Bjelland brought down Anthony Martial in the penalty area. Fernandes blasted the ball past the otherwise excellent goalkeeper Johnsson to give United the 95th-minute lead.

United’s Mason Greenwood and Fernandes hit the woodwork with shots during normal time and earlier video reviews cost United two of its best opportunities to score.

First, VAR scratched off a United penalty for offside in the buildup. Just before the break Greenwood put the ball in the net after a lightning break down the right flank but the replay showed he’d been just offside when Marcus Rashford’s pass was played.

That decision was a particular blow for United after the apparent breakthrough goal came just as the English team had seemed to be getting frustrated and taking increasingly speculative shots against a Danish team playing its first ever European quarterfinal.

Copenhagen striker Mohamed Daramy muscled his way past the United defence to shoot in the 17th but had his shot blocked by Harry Maguire, and Jens Stage’s follow-up was blocked, too.

‘Delighted to get through’

United boss Ole Gunnar Solskjaer felt his side were rewarded for their patience after finally breaking through FC Copenhagen’s stubborn defensive rearguard.

He will also hope it is third time lucky for the Red Devils this season, after bowing out of the EFL Cup and FA Cup in the last four.

“It’s the third time this season we have been to a semifinal so we are delighted to get through,” he told BT Sport.

“We deserved it, their keeper was unbelievable and we hit the post a few times.

“It could have been one of those nights that you end up with a shootout. We had to block, defend well and they made it hard for us. They were well organised with a gameplan, I knew they would be hard to break down so we had to be patient. We knew we would get chances, our attackers will always create chances.

In the other match, Romelu Lukaku scored one goal and set up another as Inter Milan defeated a tenacious Bayer Leverkusen 2-1.

Lukaku was the driving force from the start, imposing himself on the game and disrupting the Leverkusen defence to keep Inter in the hunt for its first trophy in nine years.

When Nicolo Barella gave Inter the lead in the 15th minute it was off a rebound from a shot of Lukaku’s which had been blocked.

Six minutes later, Lukaku scored after a link up with Ashley Young.

Just as Inter threatened to overwhelm Leverkusen, the German team kept itself in the game.

Kai Havertz played a one-two with Kevin Volland and fired the ball past goalkeeper Samir Handanovic to cut the gap to a single goal four minutes after Lukaku scored.

Lukaku set a record as he scored for a record ninth consecutive Europa League.

The Belgium international is the first player to score in nine UEFA Cup or Europa League matches in a row, although that run includes five games for Everton in 2014-15.

Lukaku gave the classic response when asked about his record scoring run.

“Records are records but victories are more important,” said the Inter striker. “Leverkusen are a strong side with a very good coach. It was not easy.

“The defence did a tremendous job again tonight. We are growing but we have to learn to kill games off when we have the chances to do it, and we didn’t tonight.

“Now we have time to recover physically and prepare for another great game. We will have to be ready.”

A video review stopped Inter extending its lead, overturning a penalty given for handball against Leverkusen left back Daley Sinkgraven.

Leverkusen pushed hard to level in the second half but that opened up chances for Inter and Leverkusen goalkeeper Lukas Hradecky was called on to make repeated saves.

In the semis, Inter plays the winner of the match between 2009 winners Shakhtar Donetsk of Ukraine and Swiss club FC Basel. The final is scheduled to be held in Cologne on August 21.