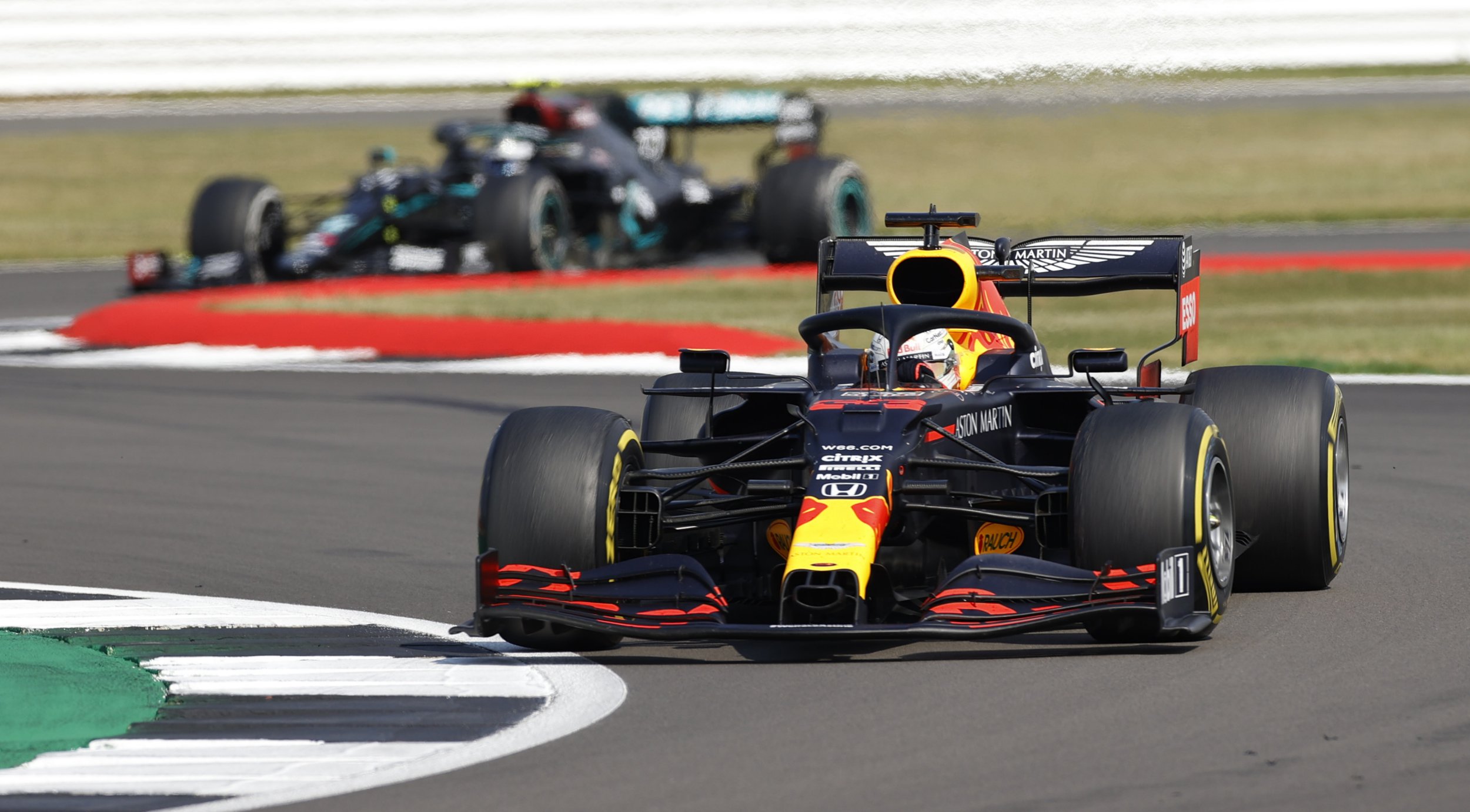 Max Verstappen has become the first non-Mercedes driver to win a race in 2020, the Red Bull racer winning out in the 70th Anniversary Grand Prix from the Mercedes pairing of Lewis Hamilton and polesitter Valtteri Bottas after an incredible display at Silverstone, UK, on Sunday.

Verstappen had been the only driver in the top ten to begin the race on the hard tyres. And after starting P4 – which became P3 by Turn One, after the Dutchman quickly passed the Racing Point of Nico Hulkenberg – he managed his pace brilliantly throughout the race, pressuring the Mercedes early on before taking the lead from Bottas with a brilliant move around Luffield, before racing to the finish for his first victory since Brazil last year – and Red Bull’s first at Silverstone since 2012. It was Verstappen’s ninth career win.

Hamilton enjoyed a late-race surge, passing his teammate with two laps to go into Brooklands to claim second place – equalling the number of podium finishes of Michael Schumacher in the process – while it was the second time in three years that Bottas has failed to convert a Silverstone pole into a win, as he came home third.

Charles Leclerc was another driver to manage his tyres well, making a one-stop work to claim a fine P4, while teammate Sebastian Vettel could only manage P12, having spun on his own at the first corner of the race.

Alex Albon took fifth for the second Red Bull, passing the Racing Point of Lance Stroll with a lap to go, Stroll ending up P6 ahead of stand-in teammate Nico Hulkenberg, who stopped late on for soft tyres.

Rounding out the top ten, Esteban Ocon was P8, ahead of the McLaren of Lando Norris and the AlphaTauri of Daniil Kvyat, who despite his lower starting position, finished one spot ahead of teammate Pierre Gasly to take his second point of the season.

It was an unexpectedly thrilling race, a fitting testament to the occasion as F1 celebrated 70 years since the F1 championship started at Silverstone in 1950.

Verstappen’s victory was a major upset and it was helped by a decision to use the hard tyres for the start of the race.

But the fact was that their car was simply faster than the Mercedes for the first time this season in the specific conditions created by the deliberate supply of a soft tyre range on a warm day around one of the most demanding tracks on the calendar.

Early in the race, his team were warning him to be careful of his tyres as he homed in on the Mercedes in front of him.

“Mate,” he replied to his engineer Giampiero Lambiase, “this is the only chance. I’m not backing off and driving like a grandma.”

At the post-race news conference, Verstappen said, “After the first stint we seemed really good on tyres and we didn’t have many tyres issues at all. It is a great result to win here and I am incredibly happy. We have not had an opportunity to push them so far this season. We need to use soft tyres – that seems to suit our car.”

Team boss Christian Horner said, “This car has put a little bit of a fight up so far and it’s only today we have seen the performance we believe it is capable of.

“We need to understand why the car has performed so well in corners that on Saturday were a weakness. On Saturdays, we are fighting for tenths with Racing Point and Renault, and then lapping them today. We have a lot to understand but it is encouraging.”

Hamilton, who extends his championship lead, said: “It was a massive challenge today but congrats to Red Bull and Max, they didn’t have the problems we had. Unexpected to have blistering as hardcore as we experienced. I was managing the tyres like you couldn’t believe. In the middle stint, one half was bald and the other half was OK. I was afraid it was going to explode.”

The British driver added, “I think it’s great. I want to have races where they’re challenging like this. I am excited to watch this race.

“The Red Bull has been quite close in race conditions to us and today stronger. It will be interesting to see the progression through the rest of the year and I will definitely not overlook them. We have to keep a close eye on them and working to push forwards, it will not be easy by any means.”

Bottas admitted that ‘it was very frustrating’.

“Starting on pole and finishing third. As a team we were sleeping at some points, Red Bull’s strategy was far better and we have to look at this. There was a chance to keep up with Max, but as soon as I pushed the tyres fall apart. When you have those blisters, you lose cornering grip,” he added.

The Mercedes had produced their usual dominant performance in qualifying, a second clear of the field, but Verstappen, choosing the hardest tyre for the start of the race, found he was able to follow them comfortably after he passed Hulkenberg at the start from his fourth place on the grid.

Bottas led Hamilton away from pole and, while Verstappen tracked the Mercedes, the black cars, on the softer ‘medium’ tyres at the start, began to struggle.

By ten laps into the race, the Red Bull was on Hamilton’s tail and it was clear the Mercedes had a real race on their hands.

Bottas and Hamilton stopped within a lap of each other on laps 13 and 14, and fitted the hard tyres, but they continued to struggle.

Verstappen motored on out front and, surprisingly, despite older tyres, extended his lead as the Mercedes ran into problems with tyre blistering.

Verstappen pitted on lap 26 for medium tyres, rejoining right behind Bottas, whom he passed immediately around the outside of Luffield corner.

Once back in the lead, Verstappen was again able to hold the Mercedes, with Bottas about two seconds behind.

Verstappen then stopped again six laps later to switch back to the hard tyre, and Bottas followed him in, the Finn’s hopes of victory now over.

The result means Hamilton extends his championship lead over Bottas to 34 points, and Verstappen has slipped ahead of the Finn into second place, 30 behind the leader.

The next race is the Spanish Grand Prix in Barcelona, Spain, from August 14-16.

It’s a track where Mercedes have won for the past three years – but with more hot temperatures forecast, and Verstappen in the form he’s in now, could there be some additional pain in Spain to come for the Silver Arrows?

(With inputs from www.formula1.com and BBC Sport)