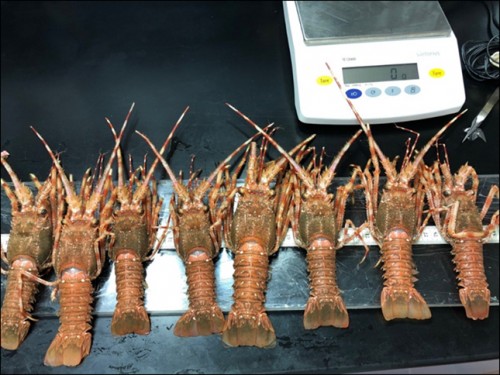 For the first time, a rare deepwater Japanese blunthorn lobster has been found in Omani waters. The Ministry of Agriculture and Fisheries research laboratory has for the first time registered the lobster known as Palinustus waguensis in the Sea Of Oman.

Eight specimens of rare deep water Japanese blunt-horn lobster Palinustus waguensis were caught by a traditional fisherman in Wilayat of Seeb, Muscat. It was caught by wired trap at 70-85 metres depth. The total length and carapace length of all eight specimens ranged from 11.5 to 14.0 cm, 5.9 to 4.6 cm, respectively. While the weight ranged from 48-109gms. All specimens were male. The coloration was reddish and distinct.

Describing the find in a recently published study in the International Journal of Fisheries and Aquatic Studies, the authors – Iman al Kharusi, Badriya al Siyabi and Khulood al Bulushi – from Marine Science and Fisheries Centre, MoAF, stated that the collected specimens is unequivocally identified as Palinustus waguensis based on its distinguishing characters.

At present, four species of lobster are documented in Omani waters, two of which are most common. The Scalloped spiny lobster Panulirus homarus is  highly abundant, exploited commercially, and distributed mostly in the Arabian Sea while the other small, painted spiny lobster, Panulirus versicolor is mainly found in Muscat and Musandam Governorates in the Sea of Oman.

Palinustus waguensis found now in Oman belongs to the genus Palinustus, which is represented by five species – P truncatus A Milne Edwards, restricted to the western Atlantic, P mossambicus Barnard, known with certainty from the eastern coast of Africa, while both, P waguensis Kubo, and P unicornutus Berry, are widely distributed in the Indo-West-Pacific and P holthuisi is found in Taiwan and Japan.

Palinustus waguensis is widely distributed in the Indo-West Pacific from Japan to Taiwan, the Philippines, Indonesia, Thailand, India, and Madagascar.

‘These deep sea spiny lobsters seem to be rare and difficult to collect due to their living environment in which they inhabit both, reef and rocky, slopes and settle at considerably deeper depths ranges of 72- 180 m,’ the study reported.

‘Recently the occurrence of Palinustus waguensiss was recorded in the Arabian Sea, off Managalore coast South-West of India, after a gap of 45 years since its first report in 1965. Their occurrence also has been reported in the deep sea trawl landings at Kasimedu, Chennai.’

The lobster has very limited value to fisheries. For example, in Thailand, the specimens were dried and sold to tourists as souvenirs and, in Japan, live ones are given to the public aquaria for exhibitions.