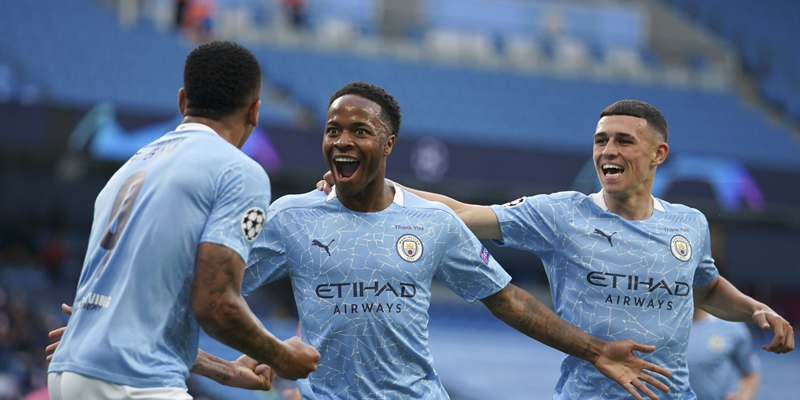 Record 13-time champions Real Madrid and Juventus were knocked out of Champions League in the round-of-16 on Friday by Manchester City and Lyon respectively.

Real’s defensive mistakes by Raphael Varane were seized on by Raheem Sterling and Gabriel Jesus to lead City into a quarterfinal against Lyon.

City won 2-1 victory against the Spanish champions in the second-leg after winning by the same score in the first-leg in Madrid (4-2 aggregate) in February before the competition was paused due to the COVID-19 pandemic.

In the other match, Juventus star Cristiano Ronaldo’s double failed to rescue the Italian champions. Juventus won 2-1 against Lyon at the Allianz stadium in Turin, Italy, on Friday but the French club advanced on away goals rule as they had won the first-leg 1-0 in February (2-2 aggregate).

Lyon’s quarterfinal against City will be played in the stadium of Lisbon club Sporting.

The seven games in the Portuguese capital, including the final at Benfica on August 23, will be played without fans due to pandemic restrictions.

On Friday, at the empty Etihad Stadium in London, City finished off the job they started back in February by deservedly overcoming Zinedine Zidane’s Madrid.

Pep Guardiola’s side inflicted Zidane’s first elimination from the Champions League, the French manager having won it three times in his three previous seasons in charge.

It was a victory City fully merited as their intense pressing game forced Real into numerous mistakes, with France World Cup-winning defender Raphael Varane in particular unable to cope with the pressing of Gabriel Jesus.

He robbed Varane to set up Raheem Sterling to score in the ninth minute but Karim Benzema’s towering header before half-time set up the possibility of a tense second period. Sterling’s opener was his 100th goal for the club.

City, though, created the better opportunities in an excellent performance – whereas Real missed the leadership and nous of central defender Sergio Ramos, who was suspended after being sent off in the first-leg.

Without Ramos alongside him, the uncomfortable Varane made another error when his headed back-pass fell short of Thibaut Courtois to allow the lurking Jesus to pounce in the game’s decisive moment after 68 minutes.

The Champions League has always eluded City and has been out of Guardiola’s reach since his glory days at Barcelona, winning his last title with Barcelona in 2011.

Zidane led Madrid to three consecutive titles from 2016 to 2018, resigned after delivering the 13th title but returned as coach in March 2019.

Zidane later said: “We cant be happy obviously, we have lost the game and we are out.

“We are proud of what we achieved this season, this is football. We lost to a good team and have to accept it. We had our chances to score.

“I am the Real Madrid manager until something happens out of the ordinary.

“You don’t need to ask any more question about my future. We will all have a rest and come back again next season.”

He said, though, said there was no time to sit back and revel in the win.

“We’re here to try and win the Champions League,” added the two-time winner when in charge of Barcelona.

“If we think that [beating Real] is enough we will show how small we are. If you want to win you have to beat the big clubs,” said Guardiola.

“I just spoke with the scouting department about Lyon and they told me to be alert. The players will go to Portugal to try to make the next step.

“We more than deserve to be in the next stage.

“To win the Champions League you have to beat a lot of teams. There are still Bayern Munich, Lyon, Barcelona, Napoli, Atletico Madrid – so many good teams.”

The remainder of the competition will be played in Portugal with the semifinals scheduled for August 18-19 and the final on August 23.

Real have been eliminated before the quarterfinals in consecutive Champions League campaigns for the first time since 2009-10 – they had reached at least the semifinals in each of the eight seasons between 2010-11 and 2017-18.

Lyon survived a Ronaldo-inspired comeback from Juventus to hang on and book a quarterfinal berth.

Leading 1-0 from February’s first-leg, the French side were handed a soft early penalty which Memphis Depay converted in style.

That left Juve needing to score three times to progress and Ronaldo got one back from the penalty spot.

He then thundered in his 130th Champions League goal but Lyon held on.

Lyon boss Rudi Garcia, said: “We came up against an opponent who has an extraterrestrial in its squad,” of five-time Ballon d’Or winner Ronaldo.

“This is the victory of a group. We wanted to be in the final eight in Lisbon, we are there.

“We’ll still be outsiders and that suits us very well.”

Juventus manager Maurizio Sarri may have guided his side to a ninth straight Italian League (Serie A) title but they were lethargic throughout and his position could be under threat.

Juve have not won the Champions League since 1996 and the wait goes on at least another year.

Ronaldo second goal on the night was a superb, swerving left-footed shot from range that gave hope of another tilt at the business end of the competition.

But when Ronaldo headed a corner over the top, that hope was extinguished.

“I don’t think directors of a top level will make a decision based on one match,” Sarri said after the match.

Lyon were only seventh in the French top flight when the season was cancelled in April and this was just their second game back. They held Paris St-Germain to a 0-0 draw in the French League Cup final last Friday night – losing on penalties – and were equally resolute in Turin.

Referee Felix Zwayer helped them out with a gift of a penalty as Houssem Aouar went down after a drive into the area, with Rodrigo Bentancur clearly winning the ball. Depay converted with a fine Panenka chip, and Lyon always looked likely to see the tie out even after Ronaldo’s double.

Lyon are the first French side to reach the quarterfinals of the Champions League since Monaco in 2016-17, while this is the first time they have reached this stage of the competition since 2009-10.