Leeds United are back in EPL after 16 years 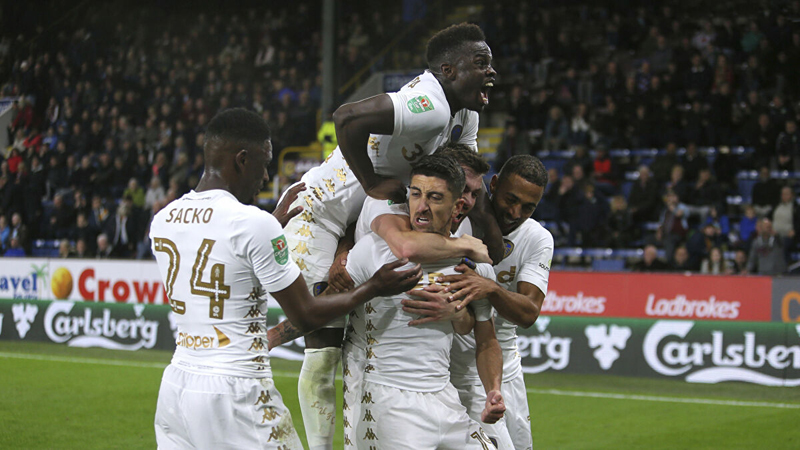 Setting off smoke bombs in the team’s yellow and blue, Leeds United fans celebrated outside their Elland Road stadium after the northern English team’s 16-year exile from the English Premier League (EPL) ended on Friday.

Leeds will return to the EPL after West Bromwich Albion’s 1-2 defeat at Huddersfield Town on Friday guaranteed them a top-two finish in the Championship.

The club’s Italian owner Andrea Radrizzani will also be toasting promotion which is worth an estimated US$305.39mn.

Leeds have 87 points with two games remaining, five more than second-placed West Brom who slumped to defeat at the John Smith’s Stadium on Friday and have one game left.

Leeds are six points ahead of third-placed Brentford, who have also played 44, and a point from their last two matches will ensure Marcelo Bielsa’s team rejoin the elite as the Championship title-holders. They could even claim the second-tier title later on Saturday if Brentford fail to win at Stoke City.

Argentine Bielsa has led the Yorkshire side to promotion in his second season in charge after finishing third in the Championship in 2018-19.

Even allowing for the enforced break because of the coronavirus pandemic, it has been a campaign where Leeds have never really looked like repeating mistakes of previous seasons and they have not been outside the top-two since November.

“Our club, our fans and our players have sacrificed so much – we’ve been in the doldrums for 16 years.

“To be part of this team and to lead this team to promotion back to where we know we’ve always belonged is unbelievable.

“We deserve it – we’ve been the best team all season on a consistent level and we’ve got the job done. We set out to get promoted and now we want to go and be champions and lift that trophy.”

The success will be doubly sweet for Leeds who missed out on promotion last season in the playoffs despite looking favourites for automatic promotion for much of the campaign.

It also comes less than a week after the death of one of the club’s greatest players – England World Cup-winning centre-half Jack Charlton.

Three times English champions, Leeds were relegated from the EPL in 2004 after hitting financial trouble and being forced to sell a host of big-name players such as Robbie Keane, Jonathan Woodgate and Lee Bowyer.

The problems were only just starting though and after three years in the Championship they slipped to the third tier and into administration with the future of the club in doubt.

While they eventually regained their place in the Championship in 2010 they never really challenged for promotion until the enigmatic Bielsa took charge in 2018.

They have been transformed under the former Argentina coach and can now look forward to renewing old rivalries with the likes of Manchester United and Liverpool.

Former skipper Dominic Matteo, who was part of the Leeds side that reached the Champions League semifinals in 2001, paid tribute to the 64 year old Bielsa.

“This is one of the best feelings I’ve ever had,” Matteo told Sky Sports.

“Bielsa and the team have been incredible. Everything they have done from start to finish has been done the right way.

“What Bielsa has brought to this football club has been outstanding. He’s got a bit of magic and you can see the passion in his body. He brings the best out of everyone and makes every player better. All credit to him and his staff.”

The appointment of Bielsa in June 2018, brought a new spotlight to the club.

The veteran had been widely praised by Manchester City manager Pep Guardiola and former Spurs boss Mauricio Pochettino for his techniques and meticulous nature and had worked with Argentina, Chile and Athletic Bilbao during his long career.

‘The best manager in the world’

One of the key figures in Leeds’ success this season has been homegrown midfielder Kalvin Phillips.

The 24 year old told BBC Radio Leeds he was struggling to put the promotion feeling into words.

“It’s crazy,” Phillips added. “When the manager first came in I never thought I would be in this position two years down the line.

“The manager and the coaching staff are a massive part of that. He’s the best manager in the world. There’s no manager I would rather be under than Marcelo Bielsa right now.

“At an age when I’m trying to develop, he’s the perfect manager to have. The Premier League is the best league in the world and, after 16 years, we’re back in there.”