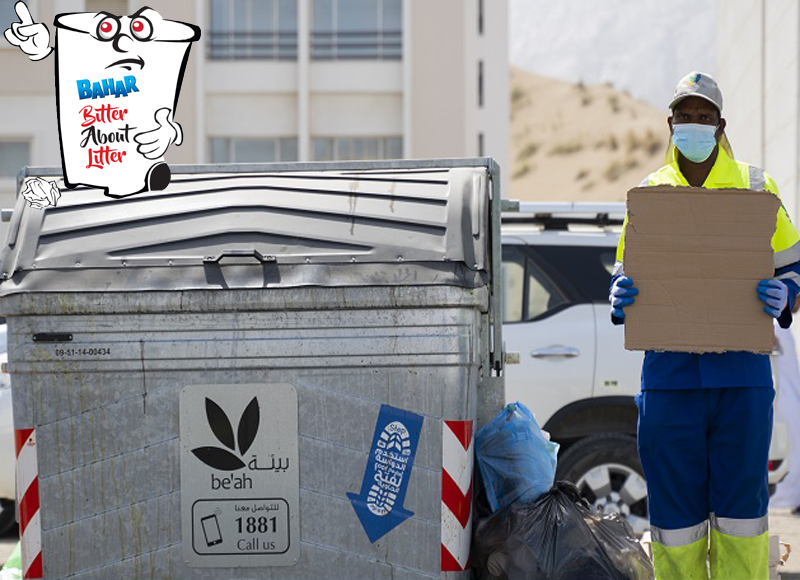 The issue of littering is growing bigger every day due to the careless behaviour of some who tend to throw waste either randomly in public places or alongside trash bins.

Although the problem has been brought to the fore in the media and through awareness campaigns that go on around the year, people continue to indulge in random littering, showing disregard for the environment, the waste cleaners’ efforts, and the overall cleanliness of the city space.

Officials and concerned residents have called on people to be responsible when throwing waste. In this regard, Oman Environmental Services Holding Company (be’ah) has launched a awareness campaign with the hashtag #Takes2Seconds to create a more responsible community.

“Unfortunately, people continue to adopt wrong ways of disposing waste, throwing it outside trash bins, causing harm to others and the environment. This adds a burden on the cleaners, especially in these unprecedented times, although it is almost effortless and very simple to put the trash bag inside the bins,” an official from be’ah stated to Muscat Daily.

The sole governmental entity responsible for solid waste management in Oman, be’ah has undertaken many campaigns seeking to spread environmental awareness and to stop littering in tourist places and eliminate the use of plastic.

“People need to understand the best waste disposal practices and to apply them in real life by throwing waste in a responsible manner, keeping in mind the negative implications of throwing waste outside designated bins. We find it necessary to spread our environmental messages to our audiences, especially family members and domestic helpers, by demonstrating the correct steps of waste disposal,” the official said.

“The time required for the current waste transportation method is estimated to not exceed 45 seconds per bin, but with the aforementioned improper practices, it takes five times more effort and time. So, this, for sure, affects our services,” he added.

He said that people also mishandle and damage garbage bins. “Some people also engage in burning or drawing on bins or breaking them despite the fact that these bins are considered public property. People need to be more sensible towards these issues,” he added.

The official also said that such awareness campaigns will help tackle the problem. “By such initiatives, we are looking forward to increased awareness among residents to help us spread our message across,” he said.

Citizens and residents reacted to the campaign positively, saying awareness is much needed in this time. “I have seen many bins with trash scattered around them and not inside. We need to keep our beautiful Oman clean. The government is spending a lot of money just to collect and process waste; so, in order to appreciate its efforts towards conserving our environment, the community should be more responsible. Some action needs to be taken against the culprits,” Fatmah al Naamani, a concerned Amerat resident, said.

Another issue of concern is that even those who dispose waste inside the trash bins, often leave the bins open, causing bad odour and attracting stray animals, which usually scatter the waste. “The issue of waste is a big concern to all. There is a need for people to act responsibly and consider the plight of those who are in the field of garbage collection. People should remember that garbage collectors have many areas to cover and they should be spared the time to pick up litter that is scattered on the ground,” Naser Shaffii, a Seeb resident, said.

All the people Muscat Daily spoke to said that until the concerned authorities take strict action against those who use trash bins irresponsibly, the situation will remain the same.