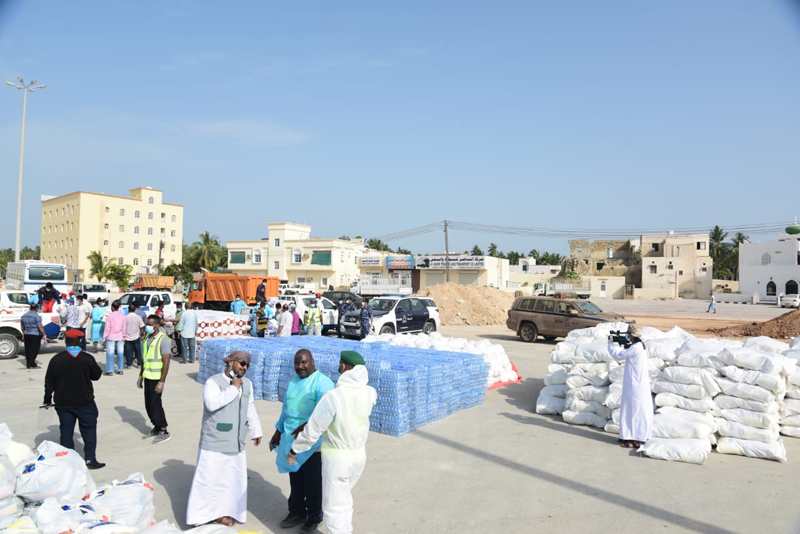 To achieve social solidarity among members of the society and to help low income families and expats, Salalah Charity Team has distributed more than 12,000 food packets in different parts of Salalah.

Speaking to Muscat Daily, Eng Tariq Amer al Kathiri, head of the team’s coordination committee, said that his team comprises of 17 board members and more than 200 volunteers. “The team is running many charitable initiatives under the slogan ‘From Society to Society’ and this is done in cooperation with many government organisations.”

The team has launched and completed several initiatives since the outbreak of the COVID-19 pandemic. Such initiatives have targeted 40,000 workers by providing 9,754 food packets, food coupons for 160 Omani families, and 250 coupons for Arab families.

“Our team recently distributed 3,200 food packets to reduce the suffering of expats workers and their families during the closure of central Salalah.”

“The team aims to achieve social solidarity among the members of society and to help low income families. The team aims to strive to meet the urgent and permanent needs of these families with limited incomes in the Wilayat of Salalah through numerous programmes that raise the standard of living for the individual,” said Kathiri.

He said that the team cooperates with community members and institutions to hold initiatives and volunteer work to serve the society, raising the level of educational competence for the children of people with limited incomes and meeting their needs.

The charity also contributes in providing medical supplies for people with special needs and supporting addiction treatment programmes, among others. “We also work to support the community in emergency situations, such as climatic conditions and contribute in supporting maternity and childhood programmes,” said Kathiri.

One of the successes that the charity has been able to achieve, says Kathiri, is that “There were a lot of informal charitable teams in Salalah. We succeeded in uniting these efforts and embraced them under one official umbrella called Salalah Charity Team.”

Talking about future plans, he said, the team will implement an initiative to help families during Eid al Adha. “We continue to seek and create a strong financial position for the team and to arrange funds and food packages from a variety of sources to implement its initiatives”.

The team cooperates with government entities such as Dhofar Municipality, Ministry of Social Development, Ministry of Awqaf and Religious Affairs, Ministry of Health, Royal Oman Police, the Directorate General for Scouts and Guides in Dhofar, Oman Chamber of Commerce and Industry, Dhofar Governorate Branch – relief and sheltering sector, and the National Youth Commission, to implement its initiatives.