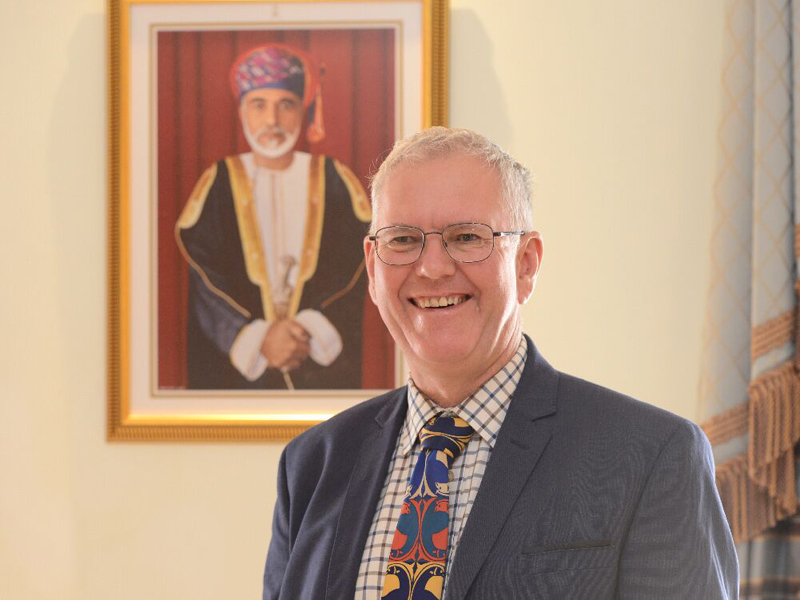 Richard Kemp, CEO, Leadership Quantum, a UK- based learning and development organisation focused on leadership development, who has been instrumental in applying the time-tested leadership qualities of Oman’s leadership for the benefit of Rwanda, one of the smallest countries on the african mainland, believes that leadership is the key to driving successful organisations which, in turn, drive a thriving economy. Reflecting during the  lockdown on Oman’s sound leadership and vision, Kemp firmly believes that the sultanate presents key lessons for many countries to learn.

Kempfocuses on delivering leadership and capacity building that impacts at a National Plan and sectoral level. As director, Cohort 2, of Oman’s National CEO Programme, Kemp has experience of delivering leadership at global economy level. With programmes for Oman’s National Training Fund, Richard has proven how to deliver high potential careerists from the average cross-section of youth. Kemp has also delivered measurable high growth and innovation programmes to SMEs through Oman’s largest CSR agencies focused on private sector resilience.

Currently in Rwanda, Kemp, who divides his time between Oman and Rwanda, where he applies the lessons learnt from Oman –  on how focus on leadership can drive economy level impact – strongly believes that this is the need of the hour as the entire world stands afoot of exponential change.

“The legacy is the proof of concept provided by the Late His Majesty Sultan Qaboos’s gift to Oman – the radically inspired National CEO Programme (NCP). His Majesty’s genuinely powerful vision behind the NCP was to see if investing in the leadership of 100 high potential careerists, drawn strategically from across an economy in transition, could build sector-specific capacity and speed diversification across the economy as a whole? The NCP’s impact proves the answer is ‘yes’,” says Kemp, adding, “Nowhere else in the world had so audacious an enquiry around the potential impact of leadership at a national economy level been attempted before. This reflected His Late Majesty’s passionate conviction that education is the foundation of wealth creation for the social, cultural and economic development of a country, as Oman so strikingly attests to this day.

With this in mind, the aim of the NCP was to start to drive self-sustaining impacts for the wider economy, with the aim of transitioning Oman from dependency on petrochemical extraction to a diversified Economy 4.0 ‘services, knowledge, and innovation-centered’ hub in the global economy, and it delivered on its premise, he said. The NCP’s one hundred graduates are now placed in strategic positions driving and inspiring change in every strategic sector of Oman’s transition economy, now diversifying around the talent and educational achievement of its people, he pointed out.

“I came to Oman in 2016 as the director of the second phase of the National CEO Programme. I continue to work on programmes, delivering Economy 4.0 employability and high potential career skills to young Omanis with specific focus on entrepreneurship, innovation and organisational transformation. Seeing Oman’s courageously-earned learning of how to focus leadership to deliver economy level impact and wealth creation, made me wonder which other transition economy could benefit from such a leadership-inspired approach. And then…Rwanda came to mind!” Kemp said.

The similarities between Rwanda and Oman are these – a formal business culture, a deeply embedded respect for top-down hierarchy, a culture of youth listening and elders speaking, clearly defined and distinctly delineated roles for men and women, a tradition of family and clan loyalty, and a deep conviction, by some, that career advancement calls for more than just credentials.

He further points out, that the differences, however, are stark. One third of Rwandans live in rural poverty and one sixth in extreme poverty. One in seven Rwandans are farmers. Twenty five per cent of Rwandan farmers’ children suffer from stunting. So, endemic youth unemployment is a major social issue for Rwanda, a country where the massive majority of the population is under 25.

Yet, Rwanda’s economy has grown by 7% a year, over each of the last ten years, a feat only, at times, surpassed by China. At the same time, Rwanda has developed the highest participation of women in government, a unique national system of performance-based citizen evaluation of government effectiveness and an expectation of good governance, rigorous and fair rule of law and zero tolerance of corruption, he asserted.

“Rwanda seeks to learn from best practices from around the world in every field it can. This made the interest in learning from Oman’s NCP very real indeed. Before lockdown hit to disrupt the world. Rwanda committed to explore the benefits of the Late HM Sultan Qaboos’s leadership legacy in the form of a number of ‘Accountable Leadership’ programmes focused on bringing impact to key sectors of the economy,” he disclosed, adding “The first of these is aimed at complete reform of the TVET (Technical and Vocational Education and Training) sector, currently perceived by citizens as the most institutionally corrupted sector in the country. Rwanda’s National Strategy for Transformation also identifies TVET as the sector most failing to deliver the tools for sustainable livelihood and wealth creation to young Rwandans intent on securing a safe and secure future.

After TVET reform, the NCP-inspired focus in on Accountable Leadership programmes aimed at strengthening health service delivery and rapid response to macroeconomic disruption, such as the COVID-19 pandemic. And, finally, these programmes aimed at securing vulnerable supply chains and the most vulnerable of Rwanda’s rural citizens (women farmers and their dependents).

“The expectation in Rwanda is to see measurable economy impact by 2025, within the mandate for full economy transition set by Rwanda’s NST1. And the learning here owes its legacy to the insight of Sultan Qaboos. And that is – leadership is the key to driving successful organisations, that drive a thriving economy. So, if you want your organisation to thrive, grow and innovate, look to your leadership. How has the lockdown, pandemic and disruption shown in your leadership to open new opportunities, possibilities and future for you and your people?,” Kemp concludes.