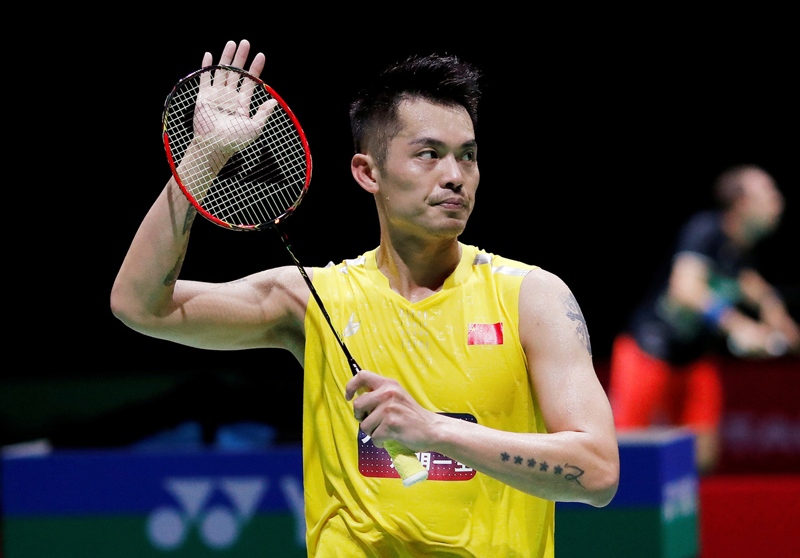 China’s two-time Olympic champion, widely regarded to be one of badminton’s greatest players, announced his retirement on Saturday, ending an illustrious career

“From 2000 to 2020, after 20 years, I have to say goodbye to the national team. It is very difficult to say it out loud,” the two-time Olympic gold medalist and five-time world champion said on Weibo, China’s twitter-like social media.

Widely seen as one of badminton’s greatest ever players, the 37 year old won men’s singles gold at Beijing 2008 and London 2012 Games, as well as five World Championship and six All England titles.

In 2011, he became the first badminton player to seal the sport’s ‘Super Grand Slam’ by winning all nine of its major titles.

“Every forceful jump was a desire for victory,” he said. “I have dedicated everything to this sport I love.”

“My family, coaches, teammates and fans have accompanied me through many happy times and difficult moments.

“Now I’m 37 years old, and my physical fitness and pain no longer allow me to fight side by side with my teammates,” Lin added.

Lin’s rivalry with Malaysian opponent Lee Chong Wei has long been regarded as the greatest in badminton’s history. Of their 40 meetings, Lin won 28.

The same two shuttlers had contested the 2008 Beijing Olympics final. Top seed Lin had it easy against Lee in a 21-12, 21-8 victory back then.

However, in 2012, Lee was World No 1 by a big margin and he took that confidence into the summit clash at the Wembley Arena, sealing the first game 21-15. The Chinese southpaw, being a game down, shifted gears and quickly claimed the second 21-10.

In the decider, with scores reading 19-20 against Lee, the Malaysian hit one long to gift his adversary the title.

The duo reigned over the sport for more than a decade and have only relinquished that hold in recent years as their powers waned.

“Please believe that the laughter, tears and all the promises are unforgettable diary entries,” the 37 year old Lee wrote in a post on China’s Twitter-like Weibo that quickly went viral.

Indonesian prodigy Taufik Hidayat, Danish legend Peter Gade, Lee and Lin were deemed the ‘Top Four Kings’ of the badminton world. “We three are missing you for a long time!” wrote Lee.

At Rio 2016, Lin lost in the semifinals to Lee in what was a rare victory for the Malaysian on the biggest stage of all.

Lin, who had something of a ‘bad boy’ reputation during his younger days and has several tattoos, ends with 666 singles wins and a glut of medals.

He earned the nickname ‘Super Dan’ at the peak of his career.

However, the left-hander’s career has tailed off in recent years as age and injuries took their toll.

Just last year he rebuffed claims that he was about to retire following a series of first-round exits at tournaments.

Lin always said that he was determined to reach the Tokyo Olympics, but his ranking of 19 in the world and the postponement of the Games made that dream unlikely.

The hope of gaining a ticket to Tokyo is slim, but the 37 year old didn’t give up and still trained hard for his goal of reaching his fifth Olympic Games.
However, the Tokyo Olympic Games was postponed by one year due to the COVID-19 pandemic, further casting a shadow on Lin’s journey to Tokyo.
“After this year’s All England Open, Lin continues to train with the Chinese national team in Sichuan province. However world badminton tournaments’ restart plan has changed repeatedly and his injury is still lingering, Lin feels that it is more and more difficult to continue training, and eventually made the decision to retire,” Chinese Badminton Association (CBA) said in a statement.

Zhang Jun, president of the Chinese Badminton Association, expressed his thanks to Lin for his contribution to the Chinese badminton team.

“Over the years, Lin’s performance in training and competition, and his achievements, have proved that he is an excellent athlete. I hope that Lin’s new life after retirement will go well, and I hope he will not stay away from badminton and continue to work hard to promote badminton in a new way.”

Lin said on Saturday his body would not allow him to plough on in the unlikely pursuit of a third Games gold.

“‘Persevere’, I said to myself in every moment of suffering, so that my sporting career could be prolonged,” he wrote on Weibo.

“Rather than simply pursuing rankings as I did when I was younger, in these years, I have been wanting to challenge the physical limits of an ‘old’ athlete and practise the sporting spirit that I will never give up.”

He added, “I’ve been through four Olympics and I never thought about quitting before. I devoted my everything to the sport I love. I always tell myself to keep going in every struggle in my career. I wish my life in sports could be longer.”

As of Saturday afternoon, a hashtag on Weibo about Lin’s retirement had been read at least 51 million times and praise for him poured in.

“It’s somewhat sudden, but understandable,” he wrote on Weibo.

“The last person of that generation who persevered has also walked to the ‘end’.

“My feelings are mixed. All the best, brother. The future will be better.”

Lin’s wife Xie Xingfang, also a former badminton world champion, wrote online: “The 20 years we have walked with each other…. will continue.

“Let us work hard together.”

Lin’s reputation was badly tainted in China in 2016 after it emerged he had an affair while Xie was pregnant. He apologised.