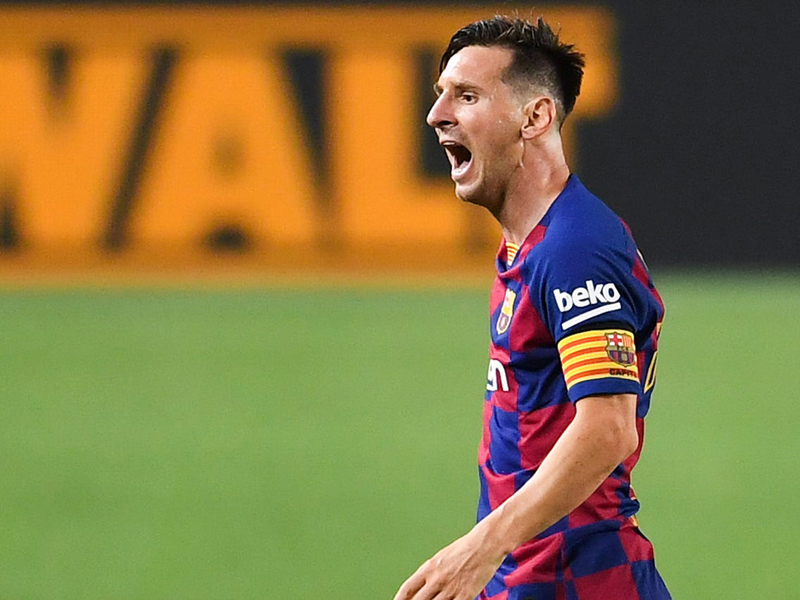 The Barcelona and Argentine striker became only the seventh player in history to score 700 goals for club and country. The superstar scored a Panenka penalty during a draw against Atletico Madrid in La Liga. Elsewhere, Manchester United trounced Brighton to move up to fifth in EPL and Ronaldo was on target in Juventus’ win over Genoa in Serie A

Lionel Messi scored the 700th goal of his career with a Panenka penalty in Barcelona’s 2-2 draw against Atletico Madrid at Camp Nou during their Spanish League (La Liga) match on Tuesday.

The Spanish giants’ all-time top scorer, who turned 33 on June 24, hit the landmark goal for club and country by gently chipping the ball into the net as Jan Oblak dived the wrong way. Messi then demonstrated his showmanship in his celebration, clicking his fingers and winking for the cameras.

The goal had put Barcelona 2-1 up but Atletico hit back to draw 2-2.

Barca remain second, one point behind Real Madrid, who have a game in hand.

Messi’s penalty was also his 630th goal in his 724th appearance for the club.

The Argentina star played a part in the opener for Barcelona when his whipped corner hit Diego Costa and deflected into the back of the net.

Former Chelsea striker Costa quickly had the chance to make amends when Atletico were awarded a penalty after Yannick Carrasco was fouled inside the box.

Costa stepped up to take the spot kick only to see it saved by Marc-Andre ter Stegen, but it had to be retaken because the Barcelona goalkeeper had come off his line early. Saul Niguez took the second penalty and sent Ter Stegen the wrong way.

Messi restored Barcelona’s lead and reached his career milestone with his cheeky Panenka – named after Antonin Panenka’s famous penalty for Czechoslovakia in the final of the 1976 European Championship – but Niguez equalised again with another penalty as Barca dropped points which could cost them dear in the title race.

Another year, another milestone for Messi

Messi’s 700th career goal – coming just over 14 months after netting for the 600th time for Barcelona – means he joins a select group.

According to data from Rec.Sport.Soccer Statistics Foundation, Messi is now one of seven players to have reached the 700-goal mark in their career.

Czech-Austrian Josef Bican leads the way with 805 career goals, followed by Brazil legend Romario, who bagged 772, with his compatriot Pele third on 767.

Messi’s great modern goal-scoring rival, Cristiano Ronaldo, is the sixth man on the list, having reached 700 career goals with a strike for Portugal in a Euro 2020 qualifier against Ukraine in October last year. He has added a further 26 goals to his tally since then.

A model of consistency, Messi has scored more than 40 goals for club and country in each of the past 11 calendar years and more than 50 in nine of the past ten. So far in 2020, after a three-month disruption caused by the coronavirus pandemic, he has 11 to his name.

Of the 40 La Liga opponents Messi has faced during his career, he has only failed to score against three of them – Xerez, Real Murcia and Cadiz.

Ronaldo on target as Juventus triumph

After a goalless first half, Paulo Dybala’s fine solo effort put Juventus ahead five minutes after the restart.

Ronaldo then got his 24th goal of the season with a fierce 25-yard strike.

The strike also means Ronaldo is just one goal away from becoming the first Juventus player to reach the 25-goal mark since Omar Sivori in 1960-61.

United rout Brighton to move up to fifth

Manchester United brushed Brighton aside with a vibrant all-round display in their 3-0 win on Tuesday as the Red Devils pursuit of a Champions League place gathered further momentum.

Ole Gunnar Solskjaer’s side totally dominated the contest at the Amex Stadium and extended their unbeaten run to 15 games to move up to fifth in the English Premier League (EPL), two points adrift of Chelsea with 52.

Teenager Mason Greenwood bamboozled Seagulls defender Lewis Dunk with quick footwork and drilled in an accurate opener for the visitors in the 16th minute.

United were ruthless in the final third as midfield playmaker Bruno Fernandes, who was highly impressive once again, netted via a deflection in the 29th minute, then volleyed in to finish a swift counter-attack soon after the interval.

Brighton did pose some threat in the second half but David de Gea made a flying save to deny Aaron Connolly as Graham Potter’s side remain in 15th place, six points above the relegation zone.

The Old Trafford side won only one of their last seven games last season to finish sixth but can be confident in the run-in this term with games against strugglers Bournemouth, Aston Villa and West Ham coming up, and a chance to collect silverware in the FA Cup and Europa League too.

United sit fifth but it could be enough to gain entry into the Champions League next season as rivals Manchester City await the fate of their appeal for a two-year ban from the competition.

Manchester United manager Ole Gunnar Solskjaer told BBC Sport: “The players have reason to be confident because they are playing fantastically. There is quality in that team, our players are fit and we have competition for places now.”