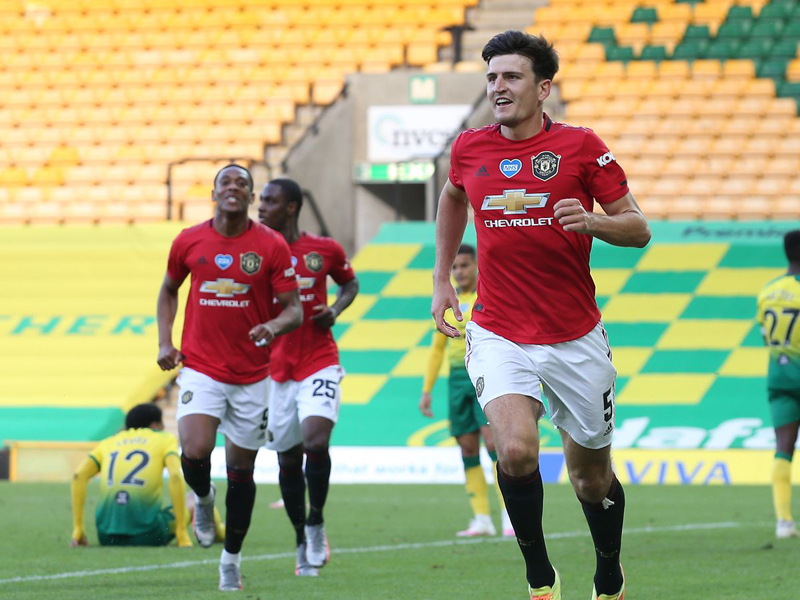 An extra-time winner saw United overcome a gritty ten-man Norwich on Saturday. Elsewhere, Barcelona’s title hopes were dented after a draw at Celta Vigo, and Bayern Munich lifted the Bundesliga trophy on the concluding day of the season

Ole Gunnar Solskjaer’s men were made to work hard and the turning point came on the dismissal of Norwich’s Timm Klose in the 89th minute.

Norwich had equalised and looked favourites to snatch a late winner before the Swiss was shown a straight red for pulling back Odion Ighalo. The video assistant referee checked Jon Moss’ decision and confirmed it within seconds.
Neither side particularly impressed in attack, although both goals in normal time were of high quality.

The first was scored by Ighalo, who continued his good run in cup competitions with a flicked effort with the outside of his boot in the 51st minute.

The second goal was even better. Todd Cantwell, Norwich’s best player in attack at Carrow Road, let fly from 25 yards with a low swerving shot that beat the reach of Sergio Romero.

Norwich goalkeeper Krul did his best to keep United at bay, saving from Paul Pogba, Mason Greenwood and Marcus Rashford – three of United’s six substitutes – before remarkably clawing Maguire’s header off the line.

But with two minutes of extra-time remaining, United finally wore their opponents down when Maguire pounced to hooked home.

For United, this was a patchy display but they remain in contention in two cup competitions and for a top-four spot in the league. It was a third semifinal in the past five seasons and their 30th last-four spot overall in the competition.

‘Guard of honour for Liverpool’

It will be Liverpool’s first game since their 30-year wait for a league title was ended after City lost at Chelsea.

“We are going to do the guard of honour of course,” said City boss Guardiola.

“We will greet Liverpool, when they come to our house, in an incredible way. We are going to do it because they deserve it.”

Barca go top with the point but Real Madrid can establish a two-point lead if they beat Espanyol on later Sunday.
Luis Suarez headed Barca in front from Lionel Messi’s clever free-kick but Fedor Smolov levelled from Okay Yokuslu’s pass.

Suarez then swivelled and smashed in a great strike – from another Messi pass – but his ex-Liverpool team-mate Aspas’ perfect low free-kick rescued Celta.

The hosts should have won the game deep into injury time but Nolito’s close-range shot was straight at Marc-Andre ter Stegen.

Messi, who has not scored in three games, is still on 699 career goals for Barca and Argentina. But he did manage the 250th assist of his Barca career for Suarez’s second.

The 33 year old is the top goalscorer with 21 and top assister with 17 in La Liga this season.

Bremen gets lifeline,  Bayern finish on a high

Bayern Munich rounded off their season in style by beating Wolfsburg 4-0 and later was awared the trophy.
Kingsley Coman and Mickael Cuisance scored in the first half for Bayern before Robert Lewandowski got his 34th Bundesliga goal of the season from the penalty spot.

Thomas Muller then made it 4-0 with a goal that brought Bayern’s league total for the season to 100.
Meanwhile, former Leicester striker Andrej Kramaric scored all four goals as Hoffenheim beat Bundesliga runners-up Borussia Dortmund 4-0.