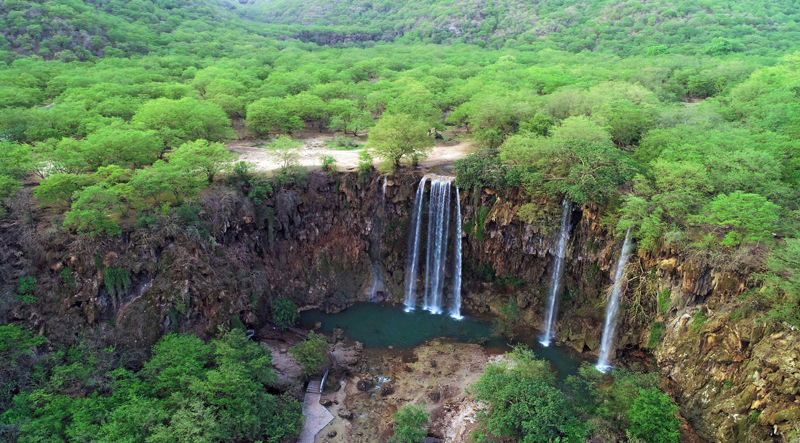 Light mist has settled over the Governorate of Dhofar, a harbinger of the annual Khareef, or monsoon season, when the temperature dips and the whole region is enveloped by greenery. This year has been exceptional, as even before the official start of the Khareef season in Dhofar (June 21 to September 21), the region turned scenic with a lush carpet of green covering its mountains and valleys. This was because the region received more than a couple of years’ rain, over five days at the end of May, due to an unprecdented weather condition.

During this time of the year, the sea water temperature drops along the coastal areas in Dhofar due to the rise of cold currents from the seabed, coinciding with a constant blowing of Southwesterly winds loaded with large quantities of water vapour. When these winds hit the mountains, it causes the air loaded with water to rise, condense and form low-altitude clouds. A rare phenomenon for the Middle East, this turns the governorate into a hot tourist spot with visitors thronging its sites in huge numbers every year.

This year, however, due to the COVID-19 pademic, those wishing to visit Dhofar will have to wait for the governorate to open up for tourists. The region was put under lockdown on June 13 and will remain so until at least July 3, according to the Royal Oman Police. During the lockdown, nobody is allowed to enter or exit the governorate.

Many in Muscat are longing for the reopening of Dhofar. “I’m longing to visit Dhofar as Muscat is getting hotter every day.

However, I am not sure if it will open up soon. COVID-19 has not ruined our health but also our social life, but we pray that all this will end soon. I know, the Khareef season has started but we have no choice but to just look at the photos and wait. As soon as it opens up, I will be the first one to go there, since I am on leave,” Aiman Khalaf, a bank employee, said.

People from across the region normally throng Dhofar to enjoy the monsoon that brings about fog from the Arabian Sea. One such example is Musallam Mohammed Sharji from Abu Dhabi, UAE, who says he visits Dhofar every year since he has been a teenager. “Of course I will miss Dhofar this year if its borders remain closed. I have been visiting Dhofar every year for last 16 years. I normally take a one month leave just to enjoy the greenery and the weather but, this year, the COVID-19 situation has made it difficult. Let’s wait and see,” Sharji said.

During the Khareef, due to active Southwesterly winds, the fog moves across the land causing low surface visibility (which extends to a 1,000m) as well as rough seas, with wave heights ranging between 3 to 5ms along the coast of Dhofar Governorate and the Governorate of Al Wusta.

Rainfall averages 50mm in Salalah city during the monsoon season, and most of the rains fall in July and August, averaging 120mm in the central mountainous areas.