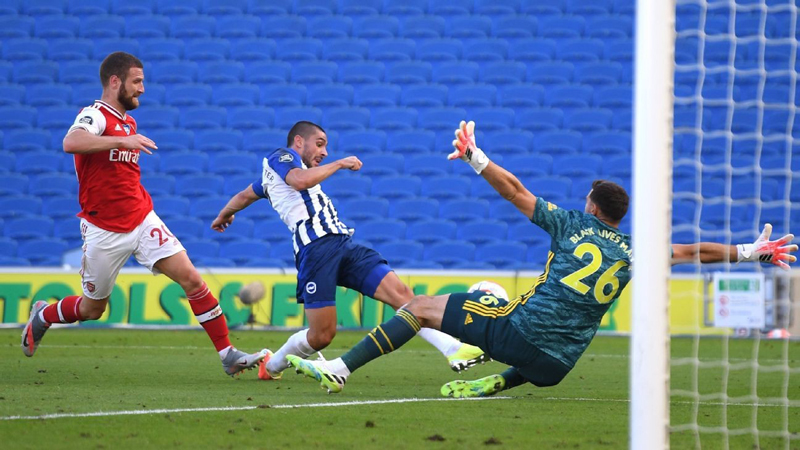 Brighton striker criticises Gunners after scoring the match winner at the Amex Stadium in an EPL game on Saturday. Elsewhere, Robert Lewandowski netted a double for Bayern Munich and Erling Braut Haaland scored twice for Borussia Dortmund in Bundesliga

Bright on match-winner Neal Maupay said Arsenal got what they deserved after they criticised him for his role in a serious injury to keeper Bernd Leno during their English Premier League (EPL) game at the Amex Stadium in Brighton and Hove, UK, on Saturday.

Leno landed awkwardly after being nudged by Maupay and had to be carried off on a stretcher as Arsenal lost 1-2.

German Leno sat up as he was being carried off and pointed at Maupay, while Arsenal players surrounded the Brighton player at full-time.

“Some of their players need to learn what is humility,” said Maupay, who scored the winner in the 95th minute.

Arsenal’s French midfielder Matteo Guendouzi had to be pulled away from Maupay by his teammates after the final whistle as Brighton came from behind to win.

“One of them was talking the whole game and saying really bad things,” added Maupay.

“When I scored I just had to say ‘listen, that is what happens when you say bad things on the pitch’.

“At half-time I went to the manager Mikel Arteta to apologise. I never meant to injure the keeper. I jumped for the ball. I apologise to the team and to him as well. I have been through a bad injury, it is hard.

“Arsenal players maybe need to learn humility sometimes. They were talking a lot. They got what they deserved.

“I just went to get the ball really. When he landed he twisted his knee. It is football, there is contact. I never meant to hurt him. I apologise again and wish him a speedy recovery.”

This was Arsenal’s second game back following the restart after losing 0-3 at Manchester City on Wednesday, when Switzerland midfielder Granit Xhaka and Spanish defender Pablo Mari were injured.

Gunners boss Arteta was also missing Brazilian defender David Luiz, who was sent off against City.

Leno was replaced by Emiliano Martinez with the game goalless. Nicolas Pepe fired the Gunners into the lead but Lewis Dunk equalised before Maupay’s late winner in stoppage time.

Speaking after the game, Arteta said Leno’s injury ‘doesn’t look good’ but does not believe Maupay deliberately intended to injure the German keeper.

“I always believe players don’t have intention to injure people and I am sure he did not intend to do that,” added the Spaniard, whose side are eight points off a top-four spot with eight games left and ninth in table.

And Arteta labelled the manner of the defeat ‘unacceptable’ from a commanding position 15 minutes from time.

“It’s a very difficult one to take because it is unacceptable the way we lost the game,” said the Spaniard.

“We missed so many chances, the fact that we gave them the first goal and we did not compete for the second goal.”

Raul Jimenez set the record for the most goals by a Wolverhampton Wanderers’ player in the EPL season after netting a brace in their 2-0 win against West Ham to help strengthen his side’s hopes of qualifying for the Champions League.

The Mexico forward planted a header beyond Lukasz Fabianski after a superb cross by substitute Adama Traore for his 14th league goal of 2019-20.

Traore was also involved in the second goal, substitute Pedro Neto volleying home Matt Doherty’s cross as Wolves, who started the day in seventh, moved above Sheffield United and level on points with fifth-placed Manchester United.

West Ham remain in trouble near the bottom after a poor performance, their first shot on target not arriving until the 49th minute when 19 year old defender Jeremy Ngakia tested Rui Patricio from distance.

Lewandowski, Haaland impress with a brace each

Robert Lewandowski scored twice for Bayern Munich and Erling Braut Haaland netted a double for Borussia Dortmund as both sides recorded victories in the penultimate round of Germal League (Bundesliga) games.

Bayern, who had secured the title in their previous match, won 3-1 at home against Freiburg.

Dortmund guaranteed themselves second place with a 2-0 victory at third-placed RB Leipzig.

At the bottom, Werder Bremen lost 1-3 at Mainz.

It means the four-time Bundesliga champions need to beat Cologne on the final day and hope Fortuna Dusseldorf lose at Union Berlin to climb into the relegation play-off place, which is contested against the side that finishes third in Bundesliga2.

Prolific Poland striker Lewandowski moved to 33 league goals for the season, becoming the record foreign goalscorer in Bundesliga history, and 47 overall in all competitions.

Teenage Norwegian frontman Haaland took his Bundesliga tally to 13 for Dortmund – at a rate of a goal every 75 minutes – having joined the side in January from RB Salzburg.