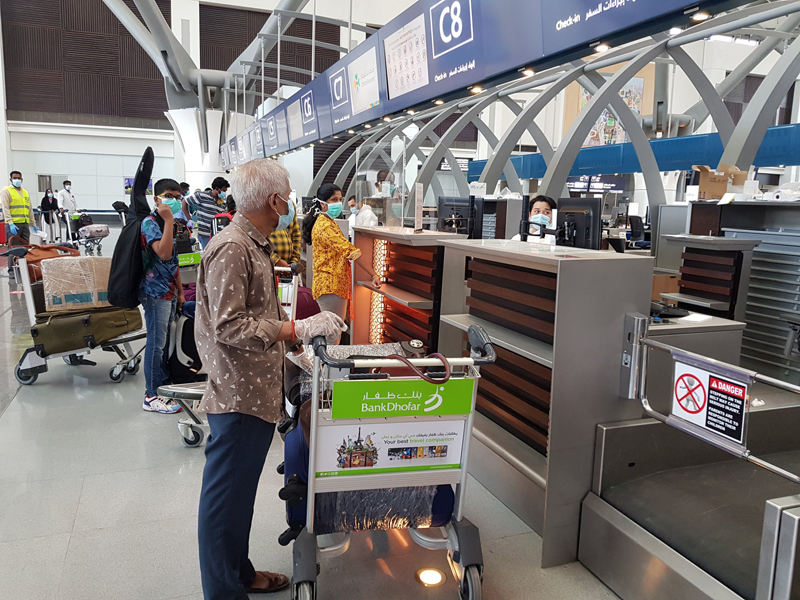 Several embassies in Oman are working tirelessly to repatriate tens of thousands of expatriates stranded in the sultanate, either due to job losses or other emergency reasons such as health concerns and expiry of visit visas.
Indian Embassy in Oman alone has made it possible for around 15,000 Indian expatriates to fly back home in 82 special flights till June 20.

According to the figures issued by the Indian Embassy, on an average 180 passengers per flight were repatriated, taking the total to 14,855. Of the 82 flights, 42 were operated under Mission Vande Bharat (MVB) programme, while 40 were arranged as chartered flights by social and private organisations. Nine more flights were scheduled to operate – from June 21 to 30 – under the MVB programme.

According to the figures gained from the official twitter account of Pakistan Embassy in Oman, till June 19, 18 special flights were operated, taking around 2,800 Pakistani nationals stranded in Oman.

The embassy was also able to bring in stranded Pakistani citizens from Yemen to Muscat, who were repatriated in special flights. The Pakistan embassy also made special arrangements to fly in 28 doctors and their families who had gone to Pakistan on a break but were left stranded due to closure of international flights on June 19. ‘After hectic efforts, 28 doctors and their family members arrived in Muscat from Pakistan to resume their duties,’ the embassy stated.

The Philippine Embassy in Muscat too has started arranging special flights for its citizens. In the first flight, which left Muscat on June 20, close to 300 Filipinos left for Manila.

Other embassies, like the British and Australian, among others, have also been arranging special flights for their citizens.