EIGHT IN A ROW FOR BAYERN MUNICH 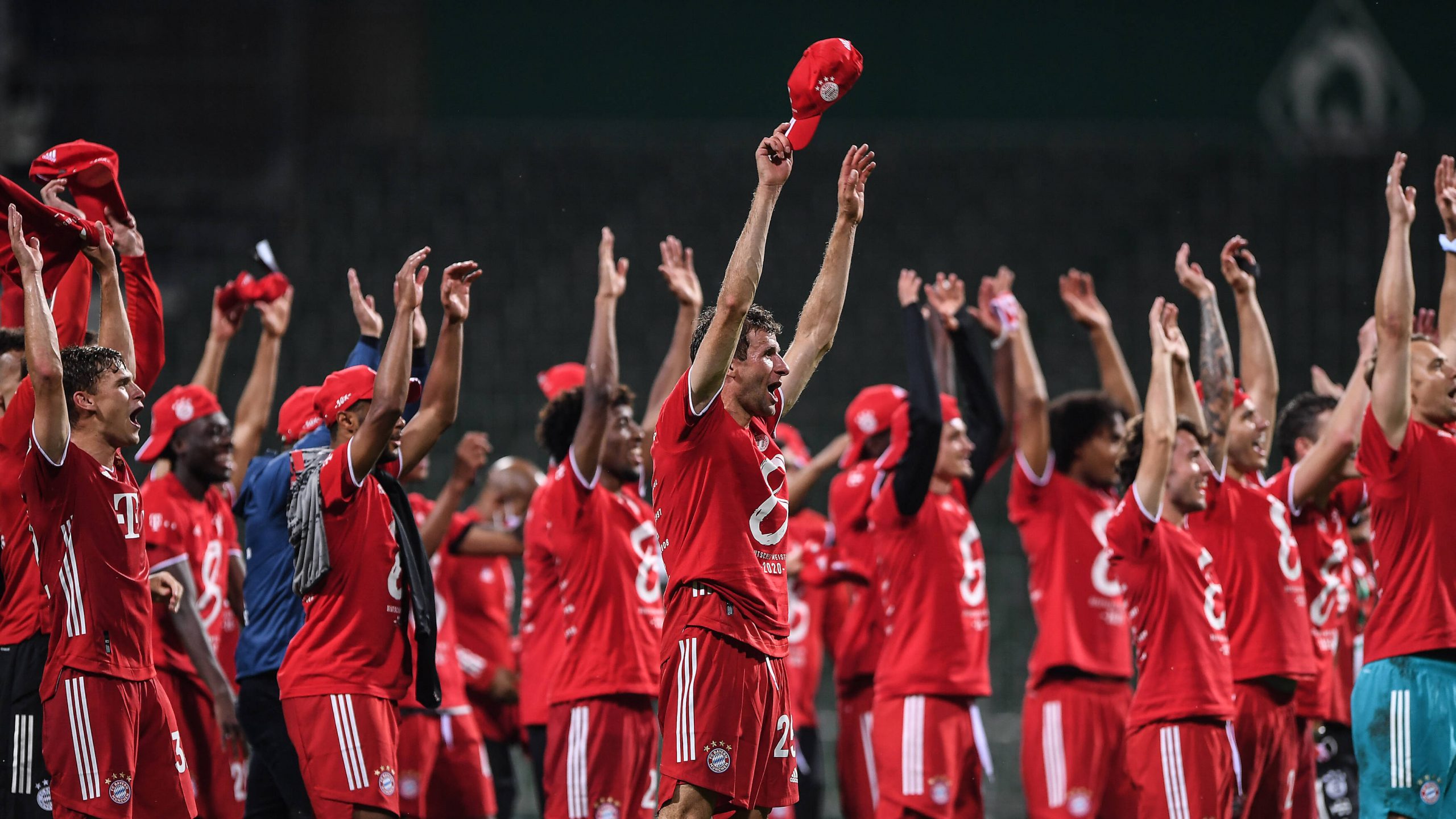 Bayern finished the match with ten men after Alphonso Davies was sent off for two yellow-card offences.

Poland forward Lewandowski has scored 31 league goals this season, a tally that equals the single-season scoring record by a foreign player in the league. Pierre-Emerick Aubameyang, now at Arsenal, scored 31 Bundesliga goals for Borussia Dortmund in 2016-17.

Coman again went close before teenager Davies was sent off with 11 minutes remaining, while Werder Bremen had a late appeal for a penalty for handball turned down.

Seven points clear of nearest rivals Borussia Dortmund with three games to go before kick-off, Bayern needed one win from their remaining three games to wrap up another title.

Hansi Flick’s side did just that – but they got over the line in unusual circumstances.

When Bayern won the title on the final day of last season, they did so after an emphatic 5-1 win over Eintracht Frankfurt in front of 75,000 fans at the Allianz Arena.

On Tuesday, there were no supporters present inside Werder Bremen’s 42,000-capacity Weserstadion as they wrapped up the title in pouring rain.

The full-time whistle was greeted with shouts of delight from Bayern’s players which echoed around the empty stadium, but it was a far cry from previous title celebrations before the coronavirus pandemic.

“It is sensational the kind of football we have played in the past few months,” said Flick, a four-time Bundesliga winner with Bayern as a player.

“You could feel the passion, the joy for the game and the team spirit.”

With matches at home to Freiburg and away to Wolfsburg still to come, Bayern’s latest domestic triumph looks relatively straightforward but it required a managerial change to kick-start their season after a poor opening.

After an embarrassing 5-1 defeat at Eintracht Frankfurt in November, Bayern were fourth in the table, four points behind early-season leaders Borussia Monchengladbach.

That result spelt the end of Niko Kovac’s 16-month reign, Flick appointed interim boss before signing a new contract until 2023 in April.

And Bayern have flourished under the 55 year old former Germany assistant.

While Bayern have progressed to the final of the German Cup, where they will meet Bayer Leverkusen on July 4 in Berlin, the five-time champions of Europe are still in the Champions League and are well placed to reach the quarterfinals after establishing a 3-0 lead over Chelsea in the first-leg of their last-16 tie.

“We have now taken the first step and reached our big goal,” added Flick.

“But we also have the cup in our sights and then obviously the Champions League games are something you cannot plan for and we still need to survive the Chelsea game.”

For Bayern’s David Alaba and Thomas Muller it was their ninth Bundesliga championship title, equalling the record set by Franck Ribery last season.

In Europe’s top five leagues, only Juventus (35 in Serie A) and Real Madrid (33 in La Liga) have won more league titles than Bayern (30, including pre-Bundesliga era).

(With inputs from BBC)