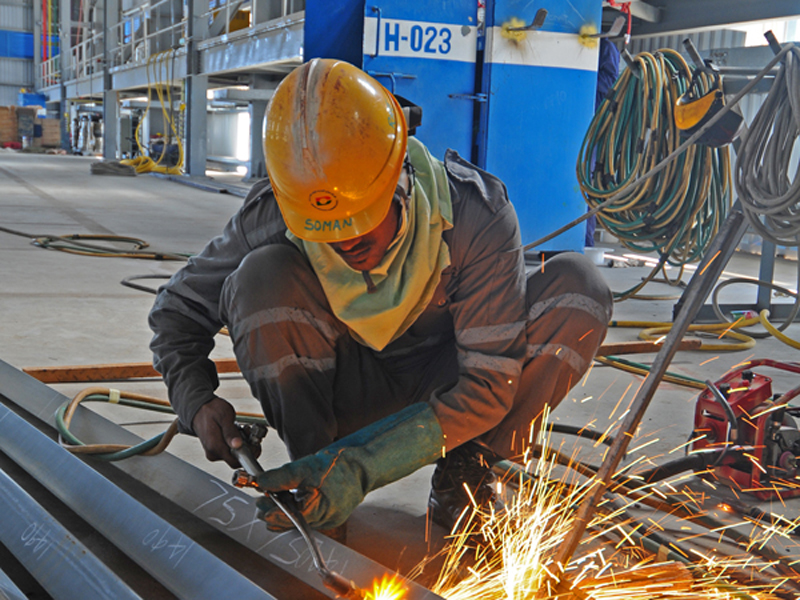 The achievement rate of the sectors of the National Programme for Enhancing Economic Diversification (Tanfeedh) reached 76.1%, an increase of 7.5% compared to the achievements of 2018.

Revealing the details, the 2019 Annual Report of Implementation Support and Follow-up Unit (ISFU) stated that 2019 was a distinguished year as ‘Sprint methodology’ was introduced with the aim to progress towards achieving the goal of each sector and filling the gap between reality and targeted indicators faster.

“I am very proud of ISFU staff whom I always encourage to do their best. Their task is not easy as they encounter challenges, some of which may look elusive. Our slogan is ‘whenever a certain initiative/project is accomplished, it stimulates economic activity’,” said Dr. Khamis bin Saif al Jabri, chairman of ISFU, in the report.

He said that after exerting tireless efforts of following up and solving issues, the continuous hard word contributed to delivering many projects and initiatives. “For example, the manufacturing sector witnessed the inauguration of the Mazoon Dairy project that we all are proud of, as its products are already available in the market.

Without such efforts exerted by the Ministry of Commerce and Industry in collaboration with ISFU to resolve the issues which this project had faced, especially those related to electricity services, we could not have achieved it.”

Also, a number of other projects were achieved in 2019 and earlier; these include the Koso Gulf Valves Manufacturing Plant, Sohar Cement Factory, Sebacic Acid Production Plant in Duqum, Polymer Manufacturing Project in the field of oil wells injection, and the MISCO Steel Rebar and Billet Production Plant. During 2020, the plan is to operate other projects like Liwa Plastics Industries Complex, Salalah Methanol Company’s Ammonia Plant, Salalah LPG Project, and food security projects (poultry and meat).

Dr Jabri added that the case is the same for other sectors. “The energy sector heads steadily toward achieving its targets. It achieved a lot as a result of joint efforts between ISFU, Ministry of Oil and Gas, Authority for Electricity Regulation and other entities. A number of initiatives have been fully delivered in 2019 such as Dhofar Wind. Also, the initiatives of the Logistics sector witnessed good improvement; especially the ones related to customs clearance, as well as the inauguration of Suwaiq Port and others.”

In addition, the projects/initiatives of the fisheries sector witnessed good achievement; including the ‘Small Pelagic Fishing’ project implemented by Al Wusta Industrial Fisheries. “Not only this, but the tourism sector intensified its efforts during 2019 to achieve good progress in its projects and initiatives. Moreover, through the joint efforts between ISFU, the Public Authority for Mining, and other entities, the mining sector was able to finalise all required procedures for (15) mining blocks, making them ready to be floated for investment.”

It is very important that these sectors are always aligned with the employment sector and its initiatives, Dr Jabri pointed out. “There were extensive efforts exerted to launch the National Centre for Employment (NCE) while the Job Security Fund encountered many challenges and was financially supported by His Majesty the Sultan with RO10mn. It is on its way toward official activation.”

Furthermore, the Investment Services Centre supervised by the Ministry of Commerce and Industry was activated. It is mandated to focus on clearing procedures and required licenses for investors. In line with these achievements, a number of laws and regulations related to investment environment and procedure facilitation have been issued (Foreign Capital Investment Law, Bankruptcy Law, Executive Regulation of Mergers and Acquisitions, and Escrow Account Executive Regulation).

“Such efforts and achievements could not have been attained unless by the harmonious and continuous coordination between the Unit and relevant government entities, and by the shared determination to overcome challenges. While each sector has achievements we are proud of, it faces technical, legal, administrative and other challenges that push us all to work harder to resolve them in order to ensure the implementation of projects and initiatives.” he added.

The report recorded the economic performance indicators of the targeted sectors during 2019, However, the events, challenges and crises that Oman has witnessed during the first quarter of this year has impacted the economy and all aspects of life.

“We hope such impact does not affect the economic sectors’ performance, as we hope that ISFU and all other relevant government entities reinforce their efforts in containing any potential impact on such sectors,” H E Sayyid Khalid bin Hilal bin Saud Al Busaidi, Minister of Diwan of Royal Court, said.