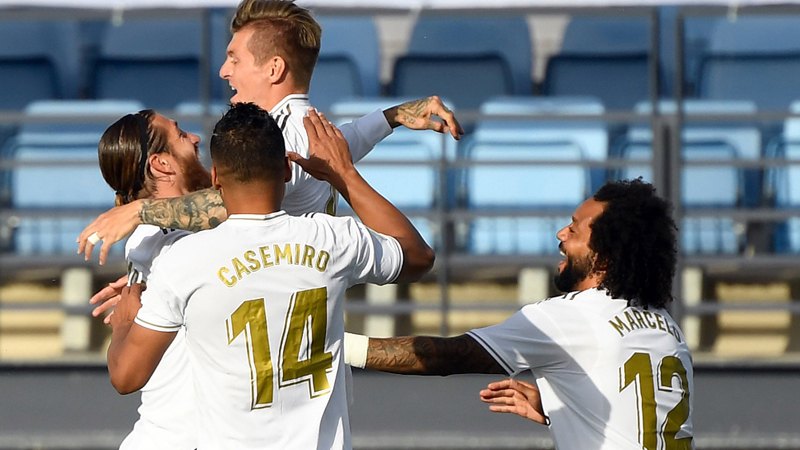 Spanish giants coasted to an easy victory over Eibar as Zinedine Zidane reached a milestone by becoming only the third Los Blancos manager to take charge of 200 games or more in all competitions. Also, Marcelo took a knee after scoring Real’s third goal in support of the Black Lives Matter campaign

The Santiago Bernabeu stadium is being renovated so Real are playing their remaining home games at the Estadio Alfredo di Stefano stadium.

Toni Kroos ensured there was no settling in period, driving in a brilliant goal after just four minutes.

Sergio Ramos and Marcelo scored before half-time in a routine win.

Marcelo, the Brazilian veteran defender, then celebrated by kneeling and raising his right fist, an apparent tribute to the Black Lives Matter campaign taking place around the world.

The hosts faded badly in the second half, with Marcelo in particular looking dizzy at one point and needing to take on fluids, and Eibar pulled one back through Pedro Bigas’ fortunate strike.

But Zidane – in his second spell and remarkably just the third manager in the club’s storied history to reach the landmark of overseeing 200 games – chalked up another win to move back to within two points of leaders Barcelona with 59 points. The France legend has won ten trophies in charge of the club.

Gareth Bale came on as a second-half substitute but was barely involved.

The pitch at the club’s training base – home of Real Madrid’s B team and with a capacity of just 6,000 – has the exact same dimensions as the Bernabeu and Kroos looked at home when he hammered in the brilliant opener.

Ramos’ goal was equally impressive. The defender cut out a pass 20 yards from his own goal, played in Karim Benzema and charged forward.

Benzema picked out Eden Hazard, making his first appearance since surgery in February, and he laid the ball back for Ramos to drill into the vacant net.

Hazard was sharp in the first half and when his shot was saved Marcelo was on hand to smash in the third.

Marcelo’s gesture of taking a knee and raising a fist made him one of the few players in the Spanish League to make public their support for the movement which has protested police brutality after George Floyd’s death in the United States. Valencia’s players last week had also taken a knee before a training session to show their support.

Hazard, who had been expected to miss the rest of the season because of a foot injury sustained before the coronavirus pandemic, thrived on his return and set up two of the goals in the game.

“We knew Eden would lack a bit of rhythm playing the whole game,” coach Zidane said.

“He played well for an hour, he too a knock, which was a scare but at half-time he said he was fine. He is happy with what he has done and we are happy with him.”

Eibar, involved in the relegation discussion at the foot of La Liga, pulled one back when Bigas diverted a shot through Thibaut Courtois but Real were able to see the game out with minimal fuss.

Real are usually greeted by a throng of supporters when their bus arrives at the Bernabeu but they faced a far more relaxing journey on Sunday as they walked 300m from their residency at the training ground to the stadium.

A large banner in the stands spanned from one goal line to the other with the image of a black ribbon and the message ‘in our hearts’, honouring the nearly 28,000 who have died with COVID-19 in Spain. The league officially resumed on Thursday with third-place Sevilla defeating city rival Real Betis 2-0.

Zidane joined an exclusive club, with only the legendary Miguel Munoz and Vicente del Bosque reaching a double century of matches in charge of the Spanish giants.

But while the French legend may have hopes of overhauling Del Bosque in the rankings, he has some way to go to match the achievements of Munoz, who managed 605 Real matches between 1959 and 1974, helping the club win nine La Liga titles and two European Cups.

Diego Costa marked his first Atletico Madrid goal of 2020 by paying tribute to Virginia Torrecilla – a midfielder for their women’s team – who had surgery for a brain tumour.

Costa celebrated equalising in a draw with Athletic Bilbao by holding a shirt with Torrecilla’s name and number.

Torrecilla had a successful operation to remove a brain tumour in May.

Bilbao captain Iker Muniain had opened the scoring in the 37th minute only for Costa to level two minutes later.

This was Atletico’s first match since knocking holders Liverpool out of the Champions League at Anfield on March 11.

Diego Simeone’s Atletico have the same 46 points as fifth-placed Getafe and are a point behind fourth-placed Real Sociedad, which drew 1-1 with Osasuna at home on Sunday.

Athletic, which had won two in a row before the break, stayed in tenth place.