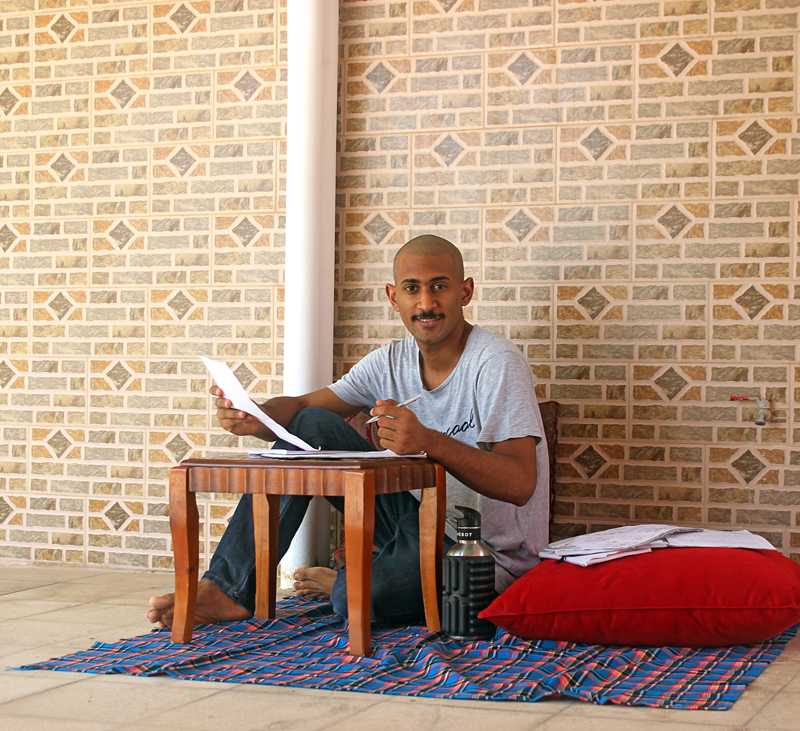 Hamdoon Sultan, an engineering student of Higher College of Technology, who had carried out a 900km round trip of Morocco on his bicycle last year as well as rode around Yemen to bring back interesting tales of adventure, believes that life exists in the midst of nature. Not to be kept down by any force, this young adventurer, however, spent the period of the recent lockdown ‘camping’ at home and documenting various aspects of his recent travels.

“At the beginning of the lockdown, I was a little down because I was supposed to climb Mt Kilimanjaro (in Tanzania, Africa) in June and had been preparing for it since long. I also has two other plans which had to be cancelled. But, as days passed, I was so thankful for the lockdown and saw it as a blessing in disguise,” said Hamdoon, adding, “I started seeing life going by at a slow pace and realised a lot of details and mistakes I had made by spending time in reflection. I also realised how humankind has been running around without considering the smaller aspects of life, which means so much to everyone. Everyone seemed to be in a hurry, but the lockdown has slowed down everyone, including me.”

Though stuck at home, Hamdoon says he could not resist the temptation of camping outdoors for long and so decided to set up camp at his own home. Though he spent the days indoors, he set up a camp on his terrace to spend the nights out in the open to get the feel of being one with nature. He had a tent, emergency supplies, a torch light and a sleeping bag placed on his terrace and enjoyed unique nights under the stars.

Hamdoon admits that he discovered new skills, like writing which was previously a boring task. “Now, I’m more into writing. I have been writing and writing during the lockdown. Everyday, a new idea has been born and new adventure plans materialise. It’s a big challenge to be an outdoor person and then suddenly you’re locked down at home, but I took the opportunity to document details of my recent trips to different countries.

“I have been writing down my previous adventure stories, starting from Zanzibar till my last adventure of cycling from Kuwait to Yemen. This is part of preparation for my next winter plan. I will also be talking about my previous adventure and what I have learned fron each adventure at youth forums. It’s time to share it with the community,” he says.

The lockdown brought about a change in Hamdoon and his next task is to explore Oman and it’s surroundings. And he looks forward to this with the same interest that he has in discovering the world on his bicycle.

He also hopes to support any young adventurer who aims to achieve similar goals like himself. “It’s true that I took up adventures all on my own, but now it’s time to support others. One of my bicycles has already been given away to a friend who’s aiming to cycle 1000km around oman. I know, Omanis are able to achieve their big dreams, they just need a little motivation and support,” he asserts.