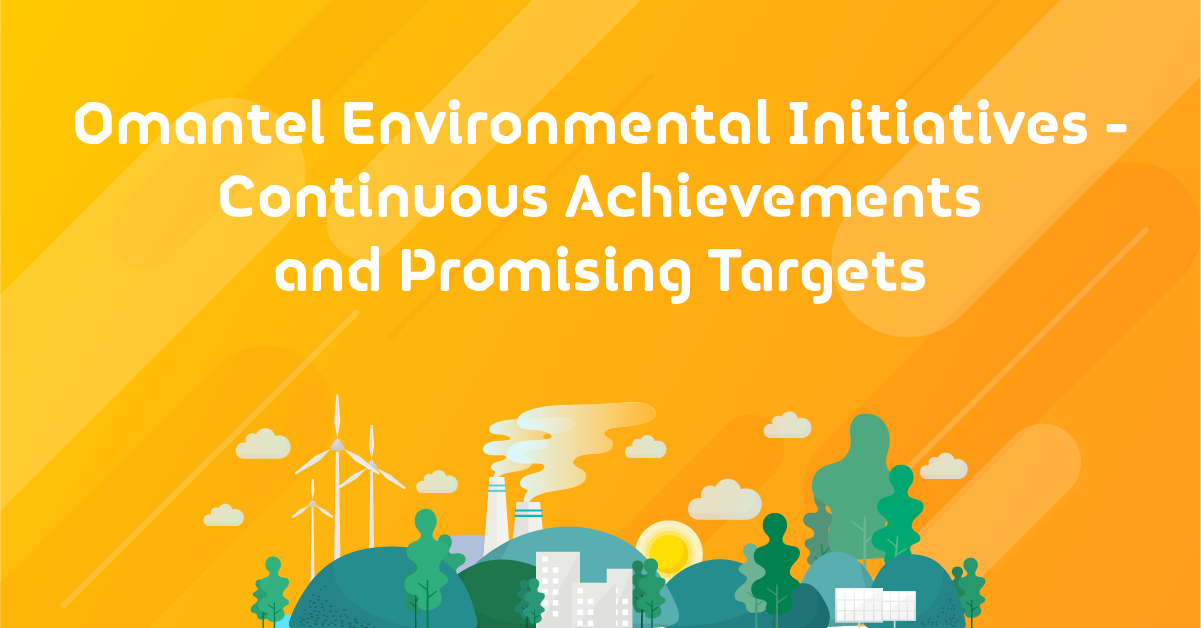 Omantel, the leading national integrated telecommunications services provider in the Sultanate of Oman, attaches great attention to environmental aspects as the company endeavours to minimise negative impacts on the environment and ensure its sustainability. Environment forms one of the key pillars of Omantel’s sustainability strategy.

Every year, Omantel launches and adopts several environmental initiatives aiming to preserve the environment benefitting from Omantel leadership position in the telecom and ICT sector and the partnerships it formed with several stakeholders to maximise the impact of these initiatives.

Omantel new headquarters is one of Muscat’s iconic buildings that employ state-of-the-art technologies. Omantel ensured during the design stage and various constructions stages, that due attention is paid to relevant environmental factors and aspects, especially those relating to material used in the building. Omantel is proud to announce that the project has achieved 100 per cent compliance for the use of low energy emitting materials used for the interiors. During construction, 59.77 per cent recycled materials were used, 46.14 per cent locally-sourced regional materials and 100 per cent FSC Certified Wood.

Achieving an excellent standard of indoor air quality was imperative to Omantel during the implementation of this project. The building is set to achieve a LEED Point for ‘Construction Indoor Air Quality Management’, which ensures that the contaminant level in the building of all pollutants that may cause allergies and asthma are within EPA limits. For the wellbeing of employees, the amount of natural light available in all regularly used spaces was of vital importance, the project has achieved daylight >269 Lux in 75 per cent of regularly occupied spaces and outdoors views can be seen from >90 per cent of regularly occupied spaces. The project has also achieved a potable water saving of 51.44 per cent relative to EPA standards.

LEED (Leadership in Energy and Environmental Design) is a certification programme which focuses on new, commercial-building projects. To achieve LEED’s Gold Certification, a minimum of 60 points is required. Omantel’s new HQ Building scored points in several areas, proudly aiming to the achievement of the gold certification. The building is located at Al Irfan business park, a central location that is accessible by public transportation networks, earning the project points for its location and accessibility by public transport.

The new HQ also scores highly for efficiency. By using low-flow fixtures and treated water for irrigation, the project achieved a good standard for water efficiency. Omantel ensured that all materials and resources used in the construction of the building were responsibly sourced, by using recycled, locally-sourced materials in line with LEED requirements. As well as adhering to responsible construction practices, the project achieved well for its innovative design and high standard indoor environmental quality.

As a result of these efforts, Omantel was awarded the Green Era Sustainability Award. The award was presented at a special ceremony in Lisbon, Portugal. During the ceremony, the Omantel CSR Manager demonstrated the company’s sustainability efforts and said in a speech, “Omantel has been working to adopt the best international practices to ensure that Oman’s ecosystem is not compromised despite the rapid development and digital transformation that we are witnessing. Omantel pays great attention to electricity and energy issues and their impact on the environment and hence closely monitors the consumption of electricity and looks for renewable energy alternatives in addition to raising awareness among community members on the need to rationalize electricity consumption.”

In another context, Omantel implemented and launched the e-billing service across all its business lines. E-bills are not only convenient for customers but also save papers and distribution costs thus helping to reduce the carbon footprint of our operations. Omantel has managed to find solutions that have reduced printing by 77%. This initiative saved thousands of trees, which could have been used to produce the paper used to print these bills.

Moreover, in 2019, launched a 750 kWh solar system for the new headquarters which will reduce the electrical consumption from the grid by more than 20%. Omantel has also started a pilot project at 12 sites in the Wusta, Dakhliya and Sharqiya regions to power cell towers using solar panels and batteries. The project aims to reduce the consumption of diesel in remote areas by powering cell sites using solar energy. This is expected to save costs by reducing the cost of logistics and fuel consumption. The diesel generators will start working only when the batteries run out of power. In 2019 we have implemented 3 solar hybrid sites. Each site reduces diesel consumption by 18.72 m3 per year accounting for a total saving of 56.16 m3.

As part of its efforts to safely dispose of hazardous and non-hazardous waste, Omantel and be’ah (Oman Environmental Services Holding Company) inked an MoU in support of circular economy for a sustainable future. Based on the MoU, Omantel will provide be’ah with lead-acid batteries, end of life tyres, used lubricating oils of Omantel’s transportation fleet and electronic, electric and paper waste, and the latter will recycle the waste to regain its economic value and support the national economy.

Omantel is the Sultanate’s first and leading integrated telecommunications services provider, enabling the digital society to flourish, allowing new ways of doing business and delivering a world of information, news and entertainment. Omantel seeks to get optimum customer satisfaction.