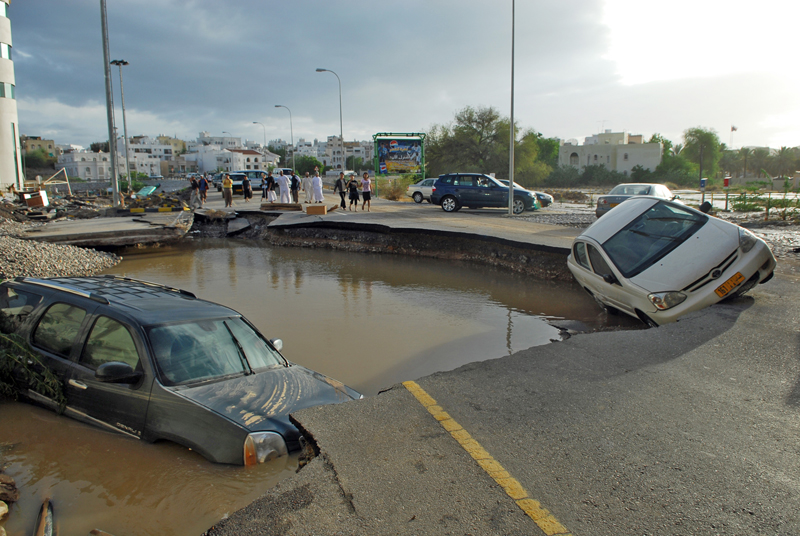 It was June 6, 2007 when Cyclone Gonu hit and drastically affected Oman. It is believed to be the strongest cyclone to hit the Arabian Peninsula since 1945 and what ensued was hardships and struggle for many people in Oman when dwellings got flooded, streets got washed away and infrastructure collapsed.

Even though 13 years have passed, memories of the devastation have not faded for those who went through the struggles. The pain wells up in their eyes every time they relive those memories.

“Cylone Gonu can never be forgotten. I remember spending three days without communication, water and electricity. The main road leading to Amerat got washed away and we had no option but to just sit and wait. We survived with the little we had and procuring just water was an adventure. Many of the overhead water tanks flew off the roof, hence there was no way of getting water. It was like we were in a war situation,” Maulid al Dwahi, who lives in Amerat, said.

Like Dhawi, Amour al Tauqil also said life was difficult. “I remember the road from Amerat to Wadi Adai was broken down. Somehow after a day without water and electricity, we just decided to drive.It took us eight hours to drive from Amerat to Wadi Adai. We wanted to go to Ghubra to seek refuge at my brother’s house but the journey, which normally takes 20 minutes, took eight hours,” he said.

Oman suffered severe power outages and water shortages as crews and volunteers worked to clean up and repair  the damage after the cyclone inundated the capital with floodwater and slush. The storm left wide swathes of Muscat under water, with floodwaters racing out of the mountains behind the city and demolishing homes and roads and sweeping away vehicles.

Qurm residents were also one of the badly affected. “The whole of Qurm near CCC was filled with water. My family and I had to climb to the top of my building because water was rising with each passing minute. We were lucky as an ROP helicopter came to our rescue. Our house was filled with water and we had to change all my furniture later,” Najat Hamdoon, a Qurum resident, said.

Muscat and the eastern city of Sur were hit by severe water shortages amid the country’s usual high heat and humidity. Residents scoured supermarkets for bottled water and also siphoned drinking water from swimming pools, as municipal authorities struggled to provide water supply by tankers.