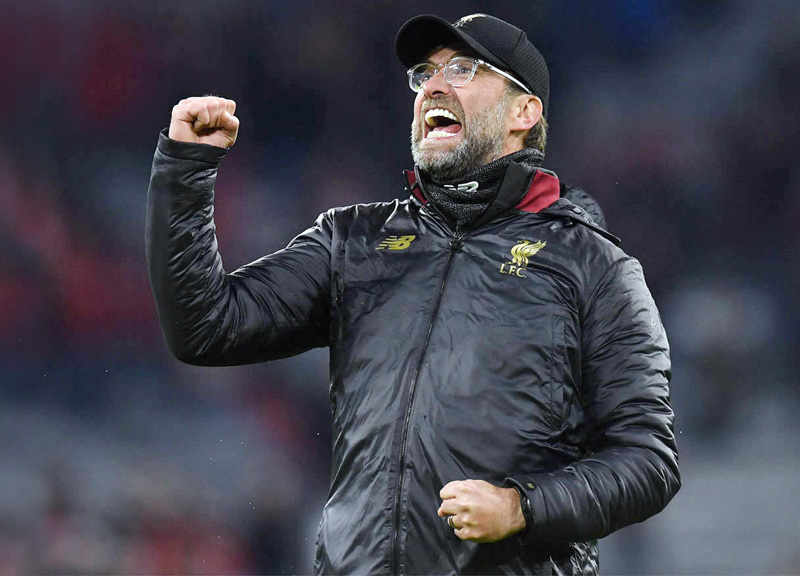 With the English Premier League (EPL) set to resume on June 17, Liverpool manager is ‘really happy to be back’ as the Reds chase their first EPL title in 30 years

Liverpool’s German manager Jurgen Klopp says he is ‘really happy to be back’ to watch his ‘wonderful football team again’ as they continue preparations for the return of the English Premier League (EPL) on June 17.

Klopp’s side are 25 points clear at the top of the table and chasing the club’s first league title for 30 years.

The EPL was suspended on March 13 because of the coronavirus pandemic.

“I have missed it so much it’s unbelievable,” Klopp told the BBC on Tuesday.

“I know it’s not the most important thing in life but it is my passion. I hope the people are looking forward to it because we are.”

Liverpool could clinch the title with victory in their first game back if Manchester City lose to Arsenal in one of two games scheduled to take place on 17 June, before the first full round of matches the following weekend.

Klopp said there was still ‘a lot of work to do’ and Liverpool ‘want to win as many games as possible’.

“It’s nice to think about it but we are not champions yet and we know that,” he added.

“We know we are close but close is not there. There are 27 points left for us and we will try everything to take them all.

“We are still not champions. We have to play football games and we have to win them.

“We don’t want to stop winning after two games or whatever it is. I don’t see results written in the stars; we have to work really hard.”

EPL players returned to contact training from May 28 but will continue to be tested twice a week for coronavirus.

‘There will be a parade…eventually’

There are 92 EPL matches remaining this season, and all will be played behind closed doors.

Klopp said celebrations with fans would happen eventually and ‘there will be a parade’ when it is safe for supporters to gather in large numbers.

“If we become champions, whatever celebrations are possible we will do as a team internally and with all our supporters in the moment we are allowed to do so again,” he said.

“I can promise that if it happens, there will be a parade as well. Whenever. Who cares! We only need one day when everybody is able to come and then we will do that.”

‘There is no advantage at home’

Several of Liverpool’s games could be held at a neutral venue after Mark Roberts, the national lead for football policing, said up to six matches could be moved at the request of local police forces.

Those fixtures include the Merseyside derby as well as Manchester City vs Liverpool.

Klopp said Liverpool ‘would love’ to play their home games at Anfield but feels there is no advantage when crowds are absent, as shown by results since the Bundesliga resumed.

“We will not have the help from the crowd but no team will have that so where is the advantage? Whoever we play it is the same situation which is why I’m not too worried about it,” said Klopp.

“We have tried to simulate the situation by training in the stadium and getting used to it.

“If you look at Germany, they have not had a lot of home wins. If the alternative is not to play at all, then I will play wherever you want. I don’t care.”

Klopp said his players had returned to training ‘in good shape’ and some had been able to rest ‘for the first time in ages’ following a heavy fixtures schedule.

“Some of them were better than last summer after a shorter break,” said the German.

“When we start, we will have had four weeks – three weeks of contact training together – and that should be enough, it has to be enough. You never know after a summer break how you will be when the season starts again and it is a little bit similar to this time.

“From the first match, we all play for absolutely everything.”