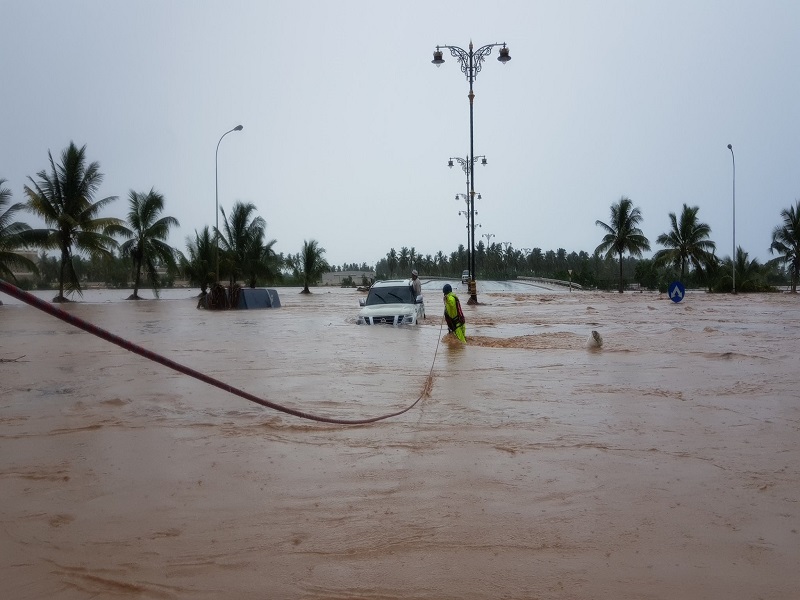 Two people died in Wadi Ain Arzat area and one in central Salalah as Dhofar continued to receive a heavy downpour due to the tropical depression engulfing the governorate. Widespread flooding was reported from across the governorate as the depression moved over the coastal areas of Dhofar bringing in record rains.

The Public Authority for Civil Defence and Ambulances (PACDA) urged people to stay indoors till the passing of the depression and receding of water in the wadis.

‘Seven people were reportedly stranded at Ain Arzat and the rescue teams were able to save five people while two people were washed away on Friday,’ a PACDA statement said.

‘The body of one of them was found on Friday and after the search till Saturday morning, the second person was found dead.’ Later in the evening,  PACDA reported the collapse of a house in central Salalah region, resulting in death of one person and injuring three others.

According to PACDA, some roads in Dhofar Governorate were affected too. ‘A number of specialised vehicles were sent to Dhofar Governorate to tackle the crisis that is expected to come up during this period of the tropical depression. We urge people to stay away from low lying areas,’ PACDA stated.

The latest weather charts and the analysis of the National Multi Hazards Early Warning Center indicated that the tropical depression was located south of coastal areas of Dhofar Governorate with estimated surface speed of around 17 and 25 knots (30 to 45 km per hour).

According to the weather forecast, 100-200 mm of rainfall was expected in Dhofar till Sunday.

Meanwhile, authorities have warned motorists not to cross wadis and low-lying areas. ‘Crossing wadis that may risk your life and also the lives of the passengers is a crime punishable by imprisonment for three months and a fine of RO500,’ ROP said.

Rainfall measurement stations belonging to the Ministry of Regional Municipalities and Water Resources (MRMWR) recorded the highest precipitation in Salalah (333mm), followed by Taqah (318mm), Mirbat (248mm), Sada 172mm and Thumrait (90mm) among others, from May 27 to May 30 morning.