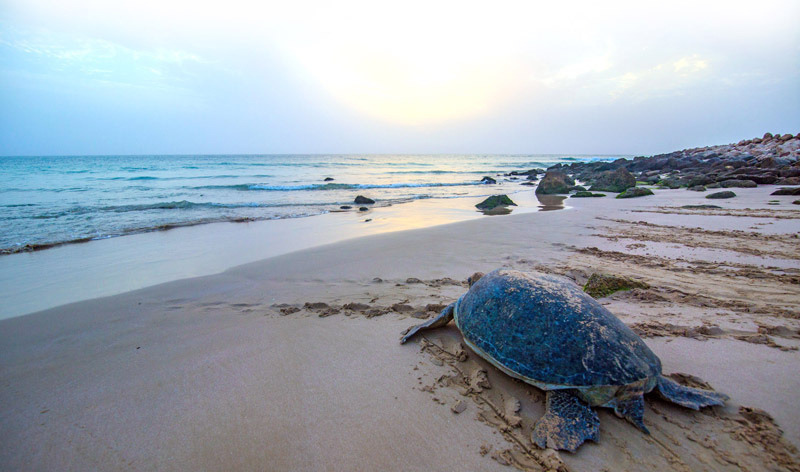 In recognition of World Turtle Day on May 23, the Environment Society of Oman (ESO) is raising awareness on one of Oman’s most beautiful and endangered animals. Oman is home to four of the seven species of turtles found in the world, including the world’s second largest population of Loggerhead sea turtles

As the sultanate’s only non-profit organisation dedicated to conserving the environment, ESO’s Sea Turtle Research and Conservation project has been central to the protection of the sultanate’s various species that swim around, and nest on, its shores, and whose populations are in decline.

The organisation is now eligible for a $5,000 Summer Sea Turtle Sustainability Grant, which, should it receive enough votes, will prove vital in the continuation of its important work and safeguarding the future of sea turtles in Oman.

“Turtles are an integral part of our marine life with populations increasingly at risk from various threats including coastal development, pollution, fishing activities and more.

ESO is committed to tackling these threats through advocacy, community outreach and education, but we need support and funding to continue this important work, which has become even more of a challenge under the shadow of COVID-19,” said Suaad al Harthi, executive director at ESO.

“Contributing to the cause can be as easy as voting for us to win the Summer Sea Turtle Sustainability Grant. This would enable us to continue to support safe sea turtle nesting beaches, and with everyone’s support we hope to continue to do more to ensure that Oman’s natural heritage remains intact for future generations to enjoy.”

Oman is home to four of the seven species of turtles found in the world, including the world’s second largest population of Loggerhead sea turtles. Others include the Green Turtle, Hawksbill Turtle and Olive Ridley Turtle who all nest in Oman. The Leatherback Turtle, a fifth species, can sometimes be found visiting our waters for feeding or whilst migrating. All of these species are listed as endangered on the IUCN Red List and face high risk of extinction in the wild.

Both land-based disturbances like coastal development and beach driving, and sea-based disturbances such as turtles being caught in fishing nets by mistake (bycatch), ghost fishing, plastic pollution and climate change, cause major threats that impact both the habitat and population numbers.

ESO has been combating these threats through its Sea Turtle Research and Conservation project, based on Masirah Island, since 2008. Among its efforts to protect sea turtles is an annual net removal campaign, which take place ahead of turtle nesting seasons to mitigate the threat of entanglement and ingestion during nesting and hatching seasons.

Last February alone, the team properly disposed of around 100 tonnes of fishing gear, bringing the total since May 2017, to over 525 tonnes of ghost gear from important and sensitive sea turtle nesting beaches.

With the impact COVID-19 has on the environment and people, it is challenging, yet important to persevere and continue advocacy and preservation work. ESO is eligible for the $5,000 Summer Sea Turtle Sustainability Grant to help sea turtles, but needs votes to be in with a chance of securing the funds.

Voting is open until June 1, 2020, and people can support ESO and vote online at www.seaturtles.org/vote. Alternatively, donations can be made directly to ESO online via the website or through Oman Arab Bank and Bank Dhofar mobile apps.