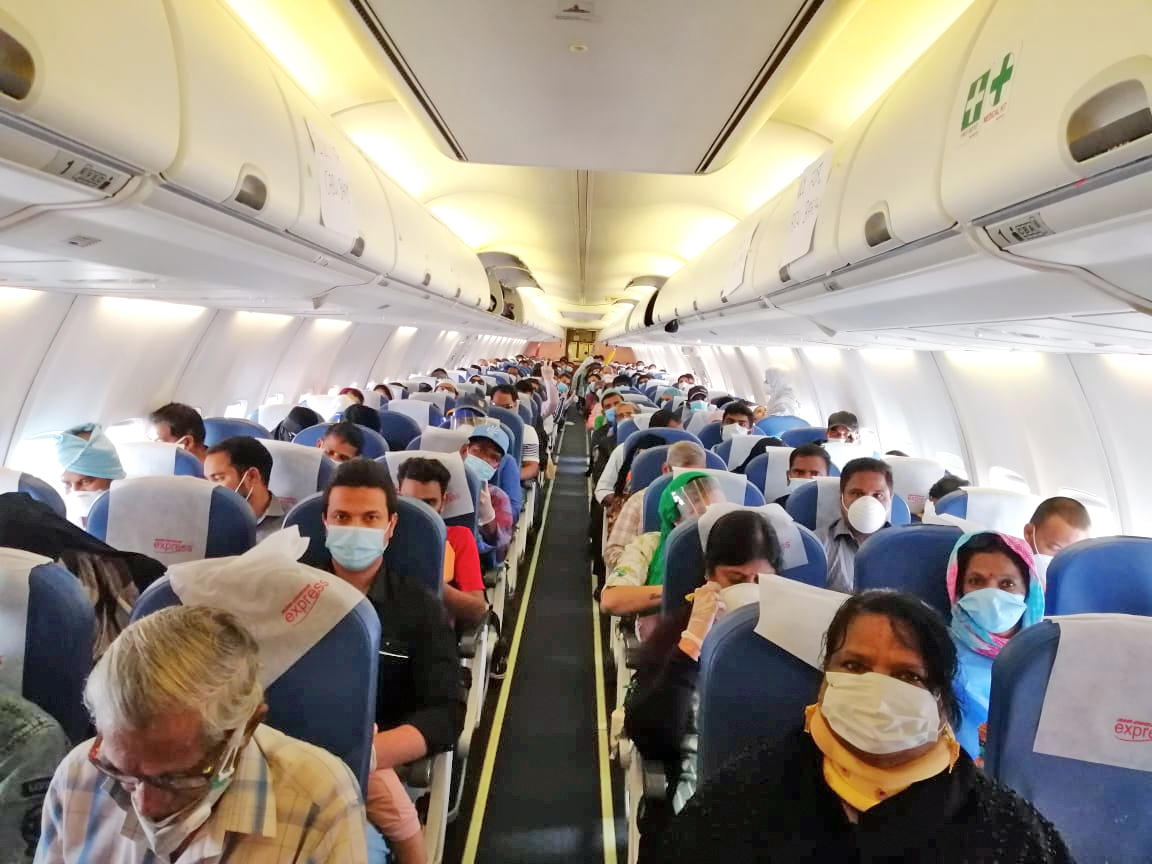 While the special flight, with 177 adults and five infants, came as a blessing for many, there were a few on the flight to Hyderabad who were apprehensive of what awaited them once they landed in India. The major concern of a few was that the state of Telangana, where Hyderabad is, does not provide free quarantine facilities like the state of Kerala.

Though some managed their ticket money for the Vande Bharat Mission flight from donations of volunteers, for people with health conditions the major concern was their safety while reaching their city.

Srinivas, who ran a laundry, has serious health concerns as he was in a coma for 15 days this February.

“Due to the health issues, I have already been in serious financial problems and two months lockdown added more burden. However, with the help of friends, I have managed to pay for the ticket.

“I am hoping that authorities at Hyderabad airport allow me to report to the hospital, instead of forcing me to go to a regular quarantine facility for 15 days.”

Narendra Pannery, president of Oman Telangana Friends group, said that due to the lockdown, many people are finding it difficult to manage even basic meals. “We have distributed around 350 food relief kits to such people and some of them approached us to fund their tickets. With the help of volunteers, we have done so,” he said

He added that the other main concern was for people with serious medical conditions. “We do not know what will happen to them, but we are trying with our fellow volunteers in Hyderabad to find a way to avoid the hotel quarantine and instead take them to hospitals directly or observe home quarantine.”

Abdullah, who had come to drop off his pregnant wife and a young child, said that he was hoping the authorities will allow his wife and kid to take up home quarantine. “Due to her pregnancy and the young child with her, it will be very difficult for her to manage alone in the quarantine facility.

“I have managed to purchase the ticket, without work and salary, with much difficulty. Now, we don’t have money to spare for paid quarantine facilities,” said Abdullah (name changed)

Veman Kumar, volunteer, Indian Social Club’s Telangana Wing, said the wing has helped many in the registration process and coordination with Indian Embassy for the flight. “With help of volunteers, we bought tickets for them. I don’t know how they will pay for quarantine because they were already surviving on food relief kits distributed by the Indian Embassy in Oman.”

Bheem Reddy, a social activist based in Hyderabad, India, said there were talks with the state government to ease the burden on returning workers from the Gulf.

“The returning workers with no money should follow the procedures and promise the authorities that they will arrange the money before the end of quarantine period. This will buy us some time in arranging for alternate measures.

“We are hopeful that the Telangana government will wave off the quarantine fee. If that fails we need to find some non-governmental organisation to help.”

(Photos and text by Syed Fasiuddin)