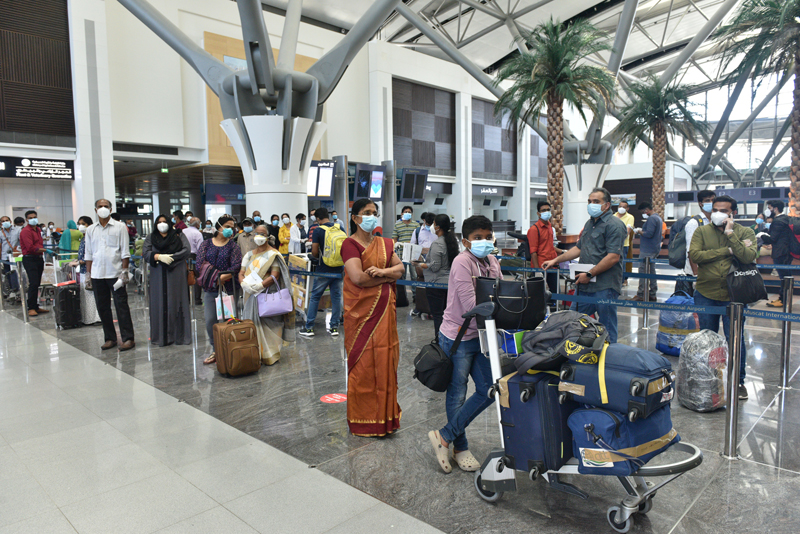 The first repatriation flight from Oman to India left for Kochi, Kerala, with 181 passengers, on Saturday evening. The Air India Express flight had arrived from Kochi around 3pm and left with 181 passengers at 4.15pm from Muscat International Airport.

According to the Indian Embassy in Muscat, the first repatriation flight from Oman (under the Vande Bharat Mission) to Kochi on May 9 had 77 people who were going because of medical emergencies and 48 comprised pregnant ladies and elderly persons, besides 30 stranded visitors, 22 workers and four infants. The second flight is scheduled to leave Muscat for Chennai at 4.15 pm on May 12.

Anil, who had come to drop his 62 year old mother to the airport, told Muscat Daily that she was on a tourist visa, which had expired even though it was extended for a month. “We were not asked to take any test for COVID-19 before arrival. Only thermal screening for body temperature was done at the airport,” he said, adding that his mother will be taken to Calicut from Kochi where she will be quarantined at a free quarantine facility provided by the state.

Bincy, a nurse, was seen with her son and mother who wore overall protective gear, taking all necessary health precautions. “Due to staff retrenchment, I lost my job. Because of my medical background, I understand the importance of taking personal precautions. I will be wearing this protective gear till I reach the quarantine facility in India,” she said.

Suroor Siddiqui was seen along with his sister-in-law Anisha, who has been advised by the doctors to go to Kerala due to her medical condition. “The embassy accommodated her upon our request, although the list was already prepared,” he said.

The embassy said that it is receiving a large number of queries regarding repatriation. In Phase I, two flights from Muscat have been scheduled to Kochi and Chennai. ‘More flights will be operated in subsequent phases covering multiple destinations,’ it stated.

Passengers for repatriation flights are being selected from those who have registered with the embassy. ‘Priority is being given to persons requiring to travel for urgent compelling reasons. We urge everyone to be patient and wait for further announcements,’ the embassy states.

Although authorities are taking all possible care and precautions in aiding these emergency flights, dealing with anxious passengers is not always easy, said Ahmed al Ruqaishi, terminal duty manger at Oman Airports.
“We have two international flights today one to Kochi, India, and another one to Damascus, Syria. The most difficult part of this operations is to make passengers understand the importance of adhering to precautions. Though we have pasted stickers on the floors, most of them are not following the two-meter distance guideline. Many passengers reported at 6am even though their flight was at 4pm,” he said.