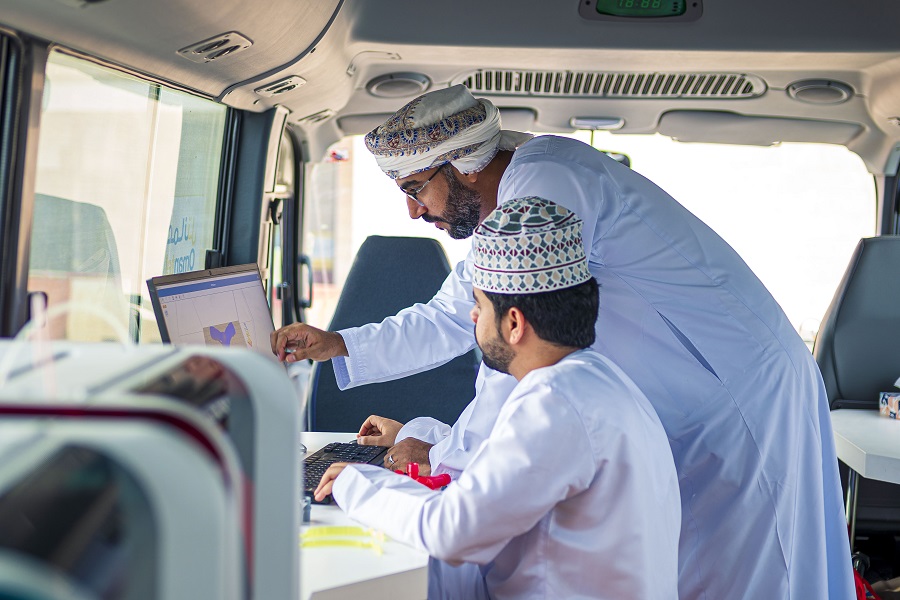 In continuation of its support to the Government authorities combating Corona Virus as part of Omantel Campaign “With You, For You and For Oman”, Omantel launched “3D Ambulance” initiative using the already available 3D printing capabilities to produce part of the required medical equipment for the Ministry of Health.

Omantel has earlier launched “Omantel Innovation Corner” at Children Public Library and “Think & Innovate” bus in cooperation with Ministry of Education (Directorate General of Education in North Al Sharqiya) in 2019. Both initiatives had 3D printing capabilities in order to educate kids and students about the new emerging technologies and their future importance. Due to the suspension of schools and closure of public places, Omantel coordinated with its partners to utilize the existing 3D printing capabilities to produce medical equipment needed by the Ministry of Health such as medical masks and surgical mask clips according to the approved specifications in coordination with Ministry of Health and the team at “Omantel Innovation Corner” represented by Sultan Al Subhi and Idrees Al Ismaili.

Commenting on this initiative, Laila Mohammed Al Wahaibi, Manager of Corporate Social Responsibility at Omantel said “The outbreak of Corona Virus posed significant challenges to the Sultanate and the whole world. Oman left no stone unturned to combat the spread of the virus. At Omantel, we sought to support these efforts and the teams working in the front line through a set of initiatives under our campaign “With You, For You and For Oman”.

“Ministry of Health was in need for many medical equipment and tools and the sourcing opportunities were limited due to the increased global demand from different countries in addition to the suspension of air travel. We decided at Omantel to use the already available 3D printing capabilities with us as part of the recently launched initiatives namely to supply part of the MoH requirements” Laila Al Wahaibi concluded.

Omantel is the Sultanate’s first and leading integrated telecommunications services provider, enabling the digital society to flourish, allowing new ways of doing business and delivering a world of information, news and entertainment. Today, Omantel is working to achieve the highest level of customers’ satisfaction as the most reliable and wide national network.