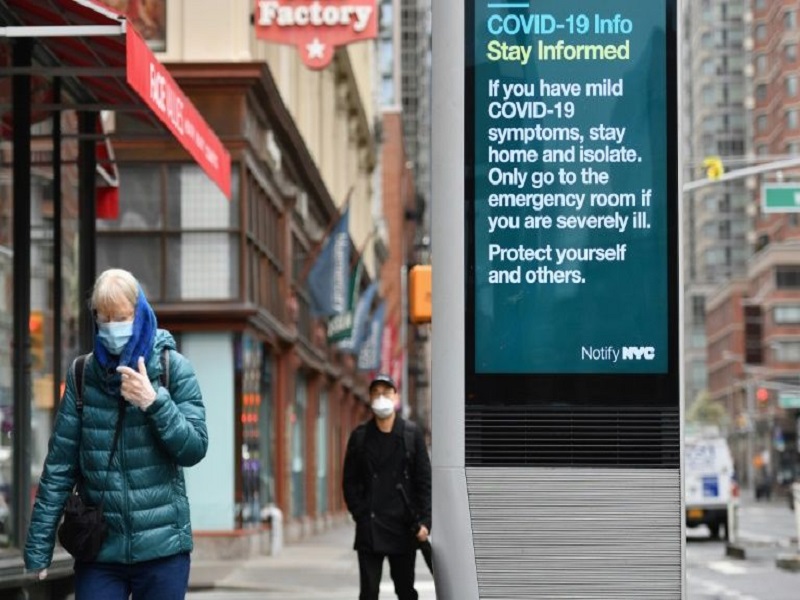 The global death toll in the coronavirus crisis soared past 60,000 on Saturday, as US calls for the public to cover their faces reignited debate about whether masks can be effective in stemming the pandemic.

The latest milestone came as Britain recorded a new daily high in fatalities, including a five-year-old child believed to be the nation’s youngest COVID-19 victim.

But hard-hit Spain recorded fewer deaths for a second straight day, providing a glimmer of hope in hard-hit Europe.

China, where the virus first appeared late last year, came to a standstill to mourn the patients and medical staff killed in the outbreak.

Across the country, cars, trains and ships sounded their horns, and air-raid sirens wailed.

“I feel a lot of sorrow about our colleagues and patients who died,” said Xu, a nurse who worked on the front lines in Wuhan, the city at the epicentre of the outbreak.

“I hope they can rest well in heaven.”

While China appears to be over the worst, the virus kept up its deadly march across the globe.

More than 1.1 million people have now fallen ill and over 60,000 people have died, according to an AFP tally.

Billions of people are living under some form on lockdown, with roughly half the planet confined to their homes as schools and businesses have closed in a bid to slow down the spread of the virus.

Europe continued to bear the brunt of the pandemic, but official figures suggested the unprecedented measures to restrict people’s movement were having an effect.

Although the picture was grim in Britain where the overall death toll climbed to more than 4,300 out of nearly 42,000 cases, other countries saw reason for cautious optimism.

Spain, which is under a near-total lockdown, saw a second successive daily fall in coronavirus-related deaths with 809 fatalities.

The total number of deaths in the country now stands at 11,744, second only to Italy.

Spaniard Javier Lara survived after being put on oxygen in an overcrowded intensive care unit — a shock to a 29-year-old who was athletic and does not smoke.

“I was panicking that my daughter would get infected. When I started showing symptoms, I said I wouldn’t hold her or go near her,” he said, describing facing death with an eight-week-old as the “worst moment” in his life.

And Italy reported Friday that the daily rise of officially registered infections dropped to a new low of just four percent, while the number of people who had fully recovered was rising.

“Our hospitals are starting to breathe.”

But the situation is rapidly deteriorating in the United States, where worst affected New York state reported a record 630 deaths in a single day.

Several Western countries including Germany and France have in recent days changed tack and are now encouraging even the use of homemade masks despite earlier telling citizens only carers needed to cover their faces.

The U-turn has angered and confused some citizens, and spurred a flurry of online tutorials for DIY masks.

But Trump himself said he wouldn’t be covering up.

“It’s going to be really a voluntary thing,” Trump said. “You don’t have to do it and I’m choosing not to do it, but some people may want to do it and that’s okay.”

Anthony Fauci, head of infectious diseases at the National Institutes of Health, cited “recent information that the virus can actually be spread even when people just speak as opposed to coughing and sneezing.”

The World Health Organization has been more cautious on the science, although it is reviewing its guidance.

The US recommendation will likely worsen an already severe shortage of masks in the US and Europe, which both rely heavily on imports from China.

Officials in New York began advising people to wear masks some days ago.

“I am trying to protect me and my family. If everybody protects themselves, it’s better for all of us,” said Eddie Marrero, a 58-year-old handyman.

In Turkey, all those going to shops or markets must wear a face mask from Saturday.

Despite early indications that the lockdowns are starting to have an effect, European governments have warned citizens not to expect a loosening of the restrictions anytime soon.

In Germany, where the death toll rose again on Saturday, Chancellor Angela Merkel said figures showing the virus’s spread was slowing “give us a little bit of hope”.

“But it is definitely much too early to see a clear trend in that, and it is certainly too early to think in any way about relaxing the strict rules we have given ourselves,” she said.

Spanish Prime Minister Pedro Sanchez announced the extension of the country’s lockdown until April 25 to curb the spread and help the health system recover.

“We know that these three weeks of isolation are bearing fruit,” he said.

In France, 160,000 police officers and gendarmes fanned out nationwide to ensure people were heeding confinement rules despite the start of Easter holidays, when French families traditionally head to the beach, countryside or mountains.

There was yet another warning over the fate of the less developed world, especially conflict zones or places with large refugee populations.

“The worst is yet to come,” UN chiefAntonio Guterres said, referring to countries such as Syria, Libya and Yemen. “The COVID-19 storm is now coming to all these theatres of conflict.”

The impoverished West African nation of Liberia meanwhile announced that a 72-year-old man had become its first coronavirus fatality.

The world economy has been pummelled by the virus and associated lockdowns, with millions more people signing on for unemployment payments in the United States.

Financial ratings agency Fitch predicted the US and eurozone economies would shrink this quarter by up to 30 percent.

Latin America is heading into a “deep recession” with an expected drop of 1.8 to 4.0 percent in GDP, according to the United Nations.