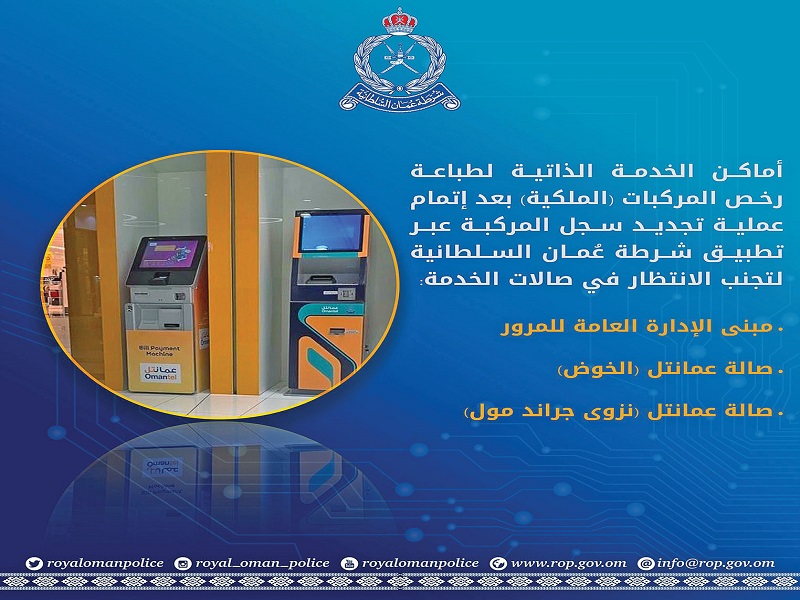 The Directorate General of Traffic is testing the use of self-service kiosks to issue vehicle registration cards (mulkiya).

This they claim will not only reduce the use of manpower but save time and put an end to the waiting period for those visiting the offices to renew their vehicle registration.

An official with ROP said, “This is an experimental service. With this service motorists can get their vehicle registration cards (mulkiya) from these self service kiosks. The machine at present has been installed in the Directorate General of Traffic’s Seeb office, Omantel’s office in Al Khoudh and Nizwa Grand Mall.”

Sharing his experience regarding the new system, a vehicle owner who had recently visited the Directorate General of Traffic’s Seeb office, said, “I renewed my car insurance first and then renewed the mulkiya by logging in the car details and resident card number through the ROP portal. I also paid the mulkiya fee online. Immediately, I got a confirmation message from the ROP regarding the completion of the renewal procedure.

“I went to the DG of Traffic office in Seeb later where I was directed to the kiosk for collecting my card. I entered the vehicle details and the card popped out from the machine.” The ROP official stressed the service can be availed once the formalities are done online. “Vehicle owners can obtain the mulkiya at one of these kiosks after they complete the insurance formalities.”

The self-service kiosk has reduced the waiting time for vehicle owners.

“This should be introduced in all offices. Earlier to get a mulkiya meant a wait of 15 to 20 minutes at the ROP office. You have to take a token, wait for your turn, handover the old mulkiya to the ROP official before the card is issued. The new kiosk is easy and convenient,” the motorist said.