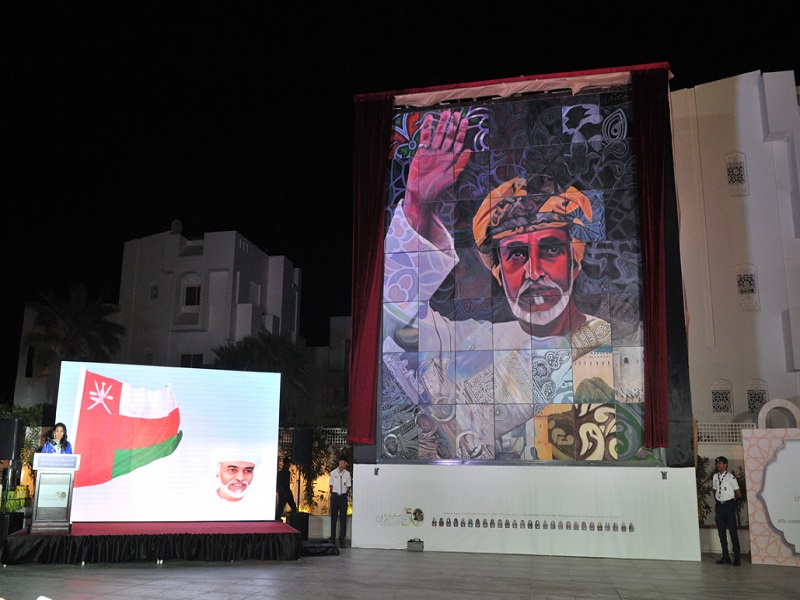 A tribute portrait, titled ‘Gratitude 50’ expressing gratitude to the Late His Majesty Sultan Qaboos bin Said was unveiled at the Water-Front by a group of 27 expatriate artists living in Oman, and will be on display until March 17. The launch event was attended by H E Suad bint Mohammed bin Ali al Lawatia, Minister of Arts.

The piece consists of 49 separate canvases, painted by different artists, which were combined to form the portrait of the Late His Majesty the Sultan. The last canvas has been left empty for expats to leave personal thank-you messages to the Late Sultan.

The concept, which was started by Kenyan resident artist Martin Mbuta, brought together artists of various nationalities from across the world, including India, Canada, China, Egypt, France, Greece, Iran, Iraq, Kenya, New Zealand, the Philippines, Serbia, Sudan, Syria, Tunisia, the UK, the US, and Brazil.

Mbuta summarised the concept, saying that, “Gratitude 50 is a thank-you card by the expatriate community in the sultanate of Oman for 50 exceptional years of peace and tranquility, friendliness and hospitality, that we believe deserve to be amplified across the world.”

Upon hearing about Mbuta’s project, Water-Front representative Kethki Ambekar said that the company jumped at the chance to display it due to its uniqueness and the fact that the Water-Front’s outdoors, by the beach location, provides the perfect nostalgic atmosphere for such an event.