No possibility of peace without Palestinian state 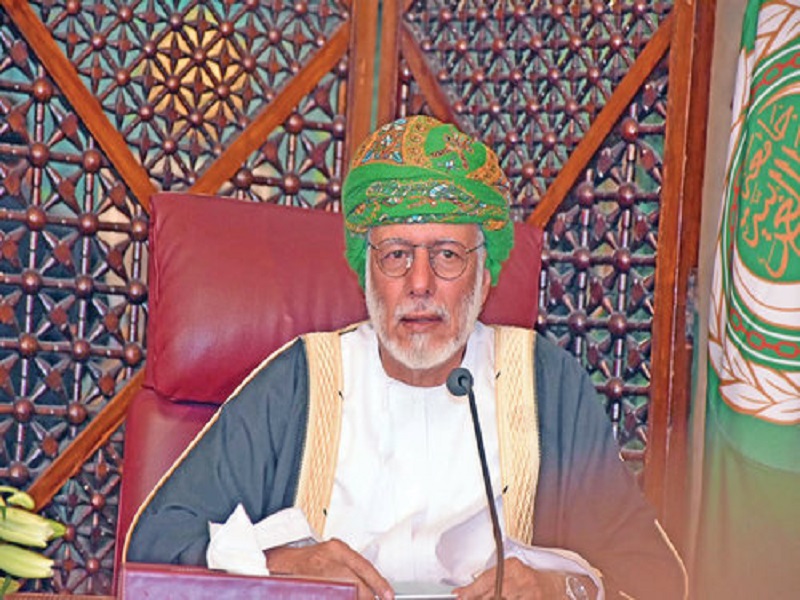 Oman, which chaired the Arab League (AL) Council’s 153rd session, has underscored its support for the Arab League and cooperation with heads of Arab states towards the realisation of Arab League goals, to achieve economic integration that serves the aspirations of Arab people.

A speech delivered by Yousuf bin Alawi bin Abdullah, Minister Responsible for Foreign Affairs, in Cairo on Wednesday stated that His Majesty Sultan Haitham bin Tarik – in his first nation address upon assuming power in Oman on January 11, 2020 – reaffirmed continuation of the country’s support to the Arab League.

Alawi recalled that Oman, upon its chairmanship of the AL Council’s 135th session in March 2011, stressed that the Arab nation was passing through a delicate phase and undergoing upheavals unprecedented in its modern history.

He added that, Oman, in its 2011 speech, explained that ‘these events would undoubtedly lead to the birth of a new Arab renaissance which needs to be shouldered by the emerging generation of Arab youth, a renaissance that constitutes the hope and future of that generation’.

“But the aspirations that the Arab nation yearned to see realised, for 11 years, got converted into a nightmare of destruction and discord. Instead of steering clear of constraints of tight life, Arab countries entered into a phase of factional disputes and bigotries of the new age of ignorance.”

Alawi proceeded on calling for a review of the Arab people’s image, non-evasion of duty of contribution and a restructuring of the course of joint Arab action – allowing ample space for contemplation to help recover the Arab people’s aptitude and affirming its moral hegemony.

He added “At the same time regaining confidence within the regional surrounding, promoting understanding and coexistence with global powers and devising diplomatic, economic and scholarly means to benefit from advanced technologies and catch up with the global community is the least we can offer the coming generations.”

Oman perceives the Arab world as an important and influential part of the world and great hopes arise for a bright future for the offspring of this nation, a future that stems from solid grounds and commendable values through which the Arab and Islamic civilisation once contributed to various sciences and disciplines shaping the human edifice, he said.

In this context, Oman underlined the need for cooperation, integration, exchange of benefits and constructive partnerships with different people of the world, considering all this as a goal and as one of the most practical means of highlighting the Arab people’s heritage and their deserved right for development and prosperity.

He stressed that, without the establishment of the Palestinian State, with East Jerusalem as its capital, there will not be any potential for achieving stability in the region or any positive environment for peaceful co-existence between Palestinians and Israelis. “We in the Sultanate of Oman, have had a conviction in peace and co-existence among nations as a civilised goal. We have worked to achieve that in all conditions and we always set out from this logic to support all efforts aimed at establishing security, peace and stability for all.

“Solving the Palestinian-Israeli conflict is a significant strategic goal for the region and the world. Therefore, we believe, Israel has no way other than entering into serious negotiations with the Palestinians for the sake of realising a safe future for generations of Palestinians and Israelis alike in a climate of peace, stability and joint benefits. The international community and global peace-loving parties should share this historic responsibility and they should assume a realistic and fair stance to end this conflict by establishing rights and applying the law and international resolutions,” he said.

He thanked all participants in the session for their efforts and for their condolences over the death of His Majesty Sultan Qaboos bin Said, who had been a smooth operator, an advisor, a promoter of peace and a supporter of the Arab League, calling on all brethren to safeguard the intactness of the house that unites all Arabs.

He concluded the speech by saying that it is time the Arab nations revised their actions, reconcile with themselves and their regional and global surroundings and stop the mayhem in lives and capabilities. “The Arab people should march into the future with hearts and minds open for a brilliant tomorrow.”