‘Road to Success’ brought to life by 20-feet paintings 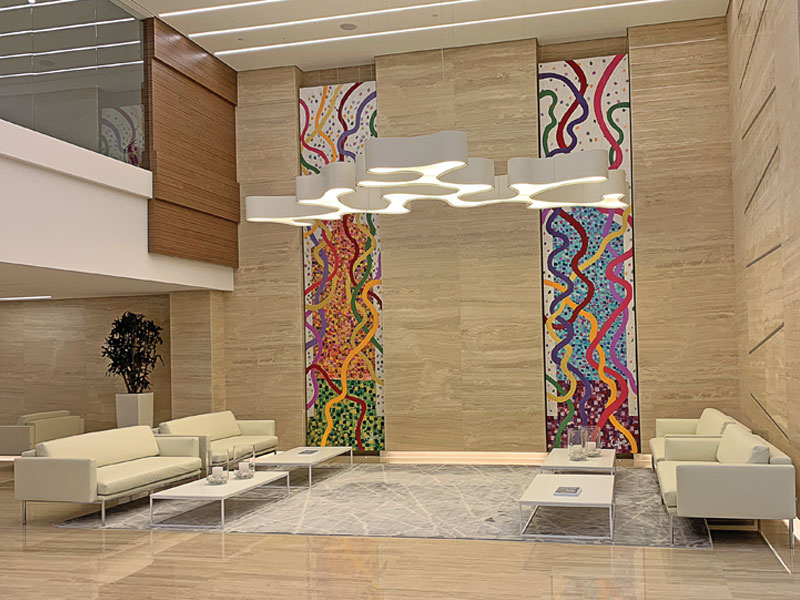 Two 20-feet modern paintings adorn the head office of Ominvest in Seeb. Believed to be the tallest in the country, the paintings had been done by the noted artist from Oman, Ibrahim Gailani.

The acrylic paintings on canvas is themed ‘Road to Success’, took five months to complete and finally 15 people to install them.

Gailani said, “The theme of the paintings is based on business. The idea was to show universal thoughts on trade and hard work. To make a successful business you need to work very hard and the paintings are made with small blocks, a direct meaning of hard work.”

Oman being the hub of both land and marine trade, the two paintings have different shades of colour: orange-brown and aqua-blue that represent trade in land and sea respectively. “There are many roads of different colours like green, yellow, red, purple as well. While some look difficult with bumps, some are easy and some lead to nowhere. This shows that there are many roads to success but not all roads are easy. Sometimes you need to go through a long journey, and not all bright roads are good,” Gailani said.
The canvas that was made with special fabric needed for the height was brought from Italy. The artist came down from his day job and worked tirelessly in his studio for four hours every day.

The paintings have been commissioned by Ominvest which wanted to showcase trade in a very unique, large and modern way.

Gailani said, “I presented many concepts in two months and finally this one was approved. There need not be any sort of symbolism that showcases any sort of traditions but a very modern take because the building is modern and stylish and the paintings needed to match the curvature and chandelier of the atrium.

“The theme ‘Roads to Success’ is a modern abstract interpretation with two abstract figures. Each figure is made up of small mosaic building blocks illustrating the multitude of hard work that needs to be put to make a success story!

“There are many roads to take – some are long and some are bumpy and some are winding and some go nowhere…which will you take to reach success? Backdrop is ivory waterfall on shimmering white to signify wealth. This was the hardest thing I ever had to do.”