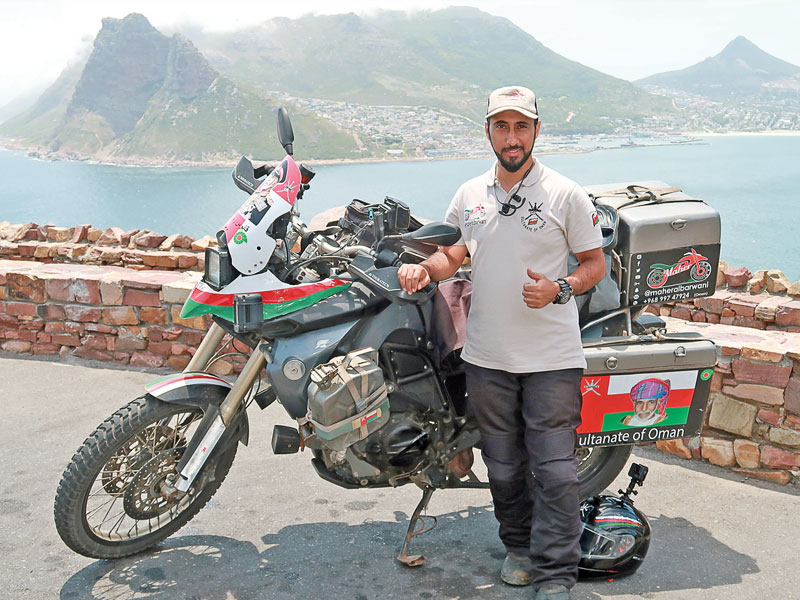 Omani biker Maher al Barwani recently concluded his three-year road trip to the African continent, which he began in 2017 to spread the message of peace, road safety and a united Africa.

Speaking about reaching the destination of the trip, Barwani said, “I have been on the road for the past few years and have sacrificed a lot. I travelled to the United Arab Emirates, Saudi Arabia, Sudan, Ethiopia, Kenya, Uganda, Rwanda, Burundi, Tanzania, Malawi, Mozambique, Zambia, South Africa, among other countries. I got a lot of support during the journey.

“Wherever I went, people were kind enough to assist me with food and accommodation and often their references helped me in different countries and cities.”

Barwani said he started his passion for riding to different countries in the world in 2009 and so far he has travelled to 46 countries.

He said he faced different challenges and obstacles during the journey including thefts, animals, snakes and insects, harsh weathers including heavy rains and high temperatures, border and visa problems, lack of basic amenities like water, food, electricity and the Internet. “During my trips my bike also broke down on several occasions and I had some challenging times,” he said.

Barwani reached Cape Agulhas in South Africa on the same day when His Majesty Sultan Qaboos bin Said passed away.

“It was a sad day for me. I prayed for His Majesty Sultan Qaboos along with my friends and some people in South Africa.” Barwani hopes that his trip shall open more doors and cement relationships between Oman and Africa. It has been difficult for the biker to be away from family since 2017 and he often missed his two daughters.

He has also understood the plight of people in the African continent. “When you live with different people you see their lives closely. I lived with different kinds of people. I saw how they struggle because of lack of drinking water and electricity. People live in bad situations. There are lakes but still people need to carry water long distances because there is no infrastructure. Hopefully, my trip will raise awareness on Africa.”

Barwani is now thinking about his return. “I am looking for a sponsor for my journey back as well as for my future trips.”