Following in the footsteps of HM Sultan Qaboos 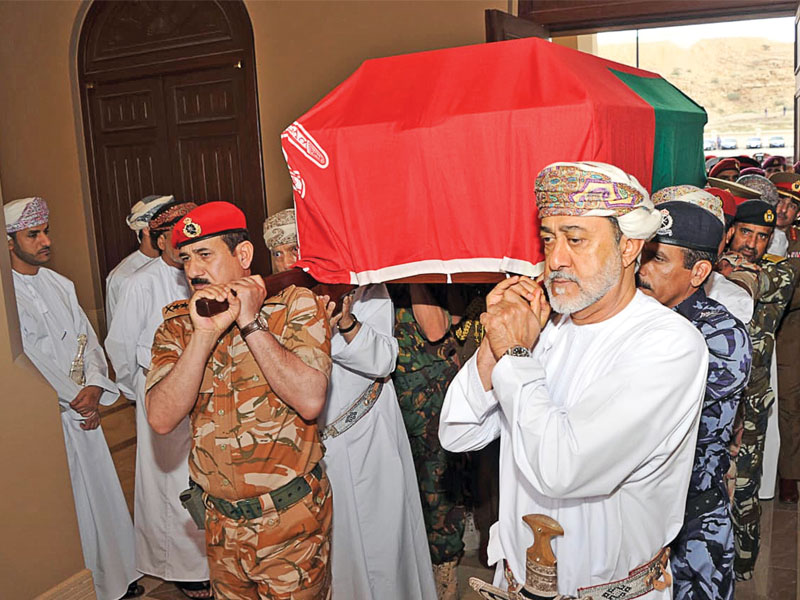 Since the demise of the architect of Oman’s Modern Renaissance, His Majesty Sultan Qaboos bin Said bin Taimour, on the 10th of January 2020, and, in the course of the past 40 days, the loyal people of Oman lived a painful period of grief and sorrow over this irreparable loss.

These feelings were shared by many world leaders and senior officials from regional and international organisations, who expressed themselves in a variety of impressive statements. Today [Wednesday] is the 40th day after the demise of the ‘Dearest and Finest of Men’. The day marks the end of period of official mourning and half-mast flying of flags, which will now flutter again, in pride and enthusiasm, as the Late Sultan wished them to be.

The loyal Omani people and lovers of Oman, all over the globe, find relief (from the untimely departure of the Late Sultan) in deep faith in the irrevocable will of the Almighty Allah. They also find comfort in His Majesty Sultan Haitham bin Tarik’s accession to power as the best successor of the best predecessor.

Omani people rally around His Majesty Sultan Haitham bin Tarik, pledging allegiance and determination to keep on track  the Blessed Omani Renaissance established by the Late Sultan, so that Oman will rise to the lofty place where the Late Sultan wanted it to be, a goal that he remained on vigil to achieve.

Though the official period of mourning ends on Wednesday, the Late Sultan Qaboos will remain as a legend deeply ingrained in the vivid memory of Omani people – in their hearts, minds and eyes – due to the achievements he made for his country and society, in all fields. They are the achievements we live by today, in all walks of life, not only within Oman, but also at the level of relations with all sisterly and friendly countries in the region and around the world.

The edifice which the Late Sultan sculptured for Oman into the world of today evokes pride in all Omani citizens, who relish the magnificence of their country as they travel around the globe and as they interact with other people.

While one bears in mind that the Late Sultan’s accomplishments for his people stand conspicuously tangible and require no proof, a noteworthy achievement remains the status of security, stability and peace in the midst of a turbulent region rife with wars and conflicts. This status would not have been a reality had it not been for the wise policies drawn out by the Late His Majesty Sultan Qaboos, his farsighted vision and his right perusal of events. This has been perceived and appreciated by many other leaders who approached him to listen to his advice or his assessment of developments in and around the region.

The region, and the world at large, benefitted from the benign efforts of the Late Sultan, who greatly contributed to the settlement of disputes and rapprochement of views.

He helped resolve disputes by peaceful means and within a framework of settlement based on understanding, mutual respect, good neighbourliness and rejection of wars and all forms of violence among countries.

The world gives tribute to the Late Sultan Qaboos who put his policy to practice and who unequivocally defined the stands of the sultanate on all developments in full frankness and transparency, using one tenor of discourse, both at negotiation tables and at declared meetings.

This earned the sultanate respect and confidence of all brethren and friends who turn to Oman to seek ways to solve their problems and rebuild trust among them, particularly because the sultanate is not in clash with any other country and accepts friendship with all other countries and extends a welcoming hand on the basis of principles that Oman has espoused and made public.

While the Late Sultan set the foundations of a modern Omani state governed by the rule of law, principles of equality and integration among state institutions to serve the interests of citizens, Omani people have in turn been explicit in their determination to keep on track the splendid legacy of the Late Sultan Qaboos, a fact made clear by His Majesty Sultan Haitham bin Tarik in his first address to the nation upon his accession to power on January 11th 2020, following the recommendation of the Late Sultan and in accordance with the legal procedures set out by the Basic Law of the State in this respect.

Omani people rallied around His Majesty Sultan Haitham bin Tarik, exhibiting full support and allegiance to him in his vow to pursue the policies drawn out by the Late Sultan and in his pledge to build upon those policies, both to express loyalty to the Late Sultan and to protect Oman’s supreme national interests.

The months to come require full mobilisation of all Omani capabilities, particularly the energies of Omani youth, give a strong push towards the attainment of national goals and preservation of gains of the nation, including action to diversify sources of national income and arrangements to implement Oman Vision 2040 with effect from next year. This was also underscored by His Majesty Sultan Haitham bin Tarik in his first historic Royal Speech.

He called for gathering all possible efforts to achieve this goal, noting that the Omani people are capable of shouldering that responsibility.